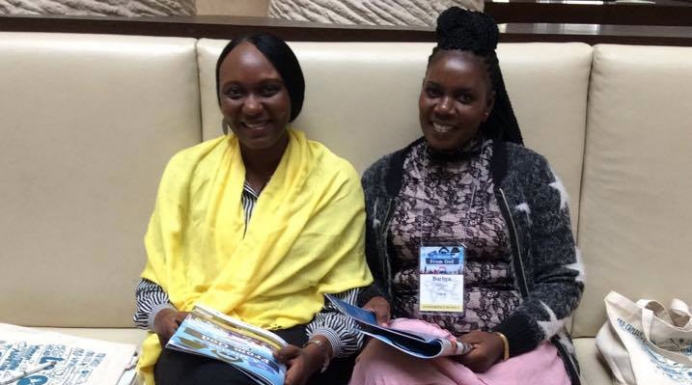 After Saving Her Baby in the US, Elizabeth is Shining Light on the Dark Continent

In 2001, Elizabeth Massaba was an undergraduate at Franklin University. A native of Tanzania, she was well aware of how much was riding on her education—not just for herself, but for her family back home.

So, when she found out she was pregnant, it took Elizabeth six months to tell her mother about her situation. When her mother flew out to Columbus, Ohio, to visit  Elizabeth, she expected to find her in shambles, fearful and alone in her last three months of pregnancy.

That’s not what she found, however. And one of the main reasons had to do with who Elizabeth found first: a pregnancy center where a volunteer took it upon herself to personally advocate for Elizabeth all over town—including at a nearby hospital, which she successfully convinced to cover Elizabeth’s bill in full after her son, now 15 years old, was born.

Elizabeth’s mother was so shocked by the care her daughter received, she ended up making a return trip the U.S. in the years that followed to find out more about pregnancy centers—including how she and Elizabeth could start one of their own in Tanzania.

In her return trip to the States, Elizabeth’s mother met up with a woman named Peggy Hartshorn, who not only founded the center that helped her daughter—now a six-location organization called Pregnancy Decision Health Centers—but was then serving as president of Heartbeat International, the world’s largest network of locally run pregnancy centers, medical clinics, maternity homes and nonprofit adoption agencies.

Though it took another decade to follow through on the vision, Elizabeth is now the executive director of Life Seed Tanzania, one of the very first pregnancy centers in Tanzania, which started serving women in 2016.

“I was asking myself, ‘Why did God protect me from abortion? Who am I?” Elizabeth, who joined 43 men and women from 22 nations outside the U.S. at Heartbeat International’s 2017 Annual Conference in Chicago April 19-21, said. “I have not done anything big for God, I’m just a normal person, but he chose me. I felt like there is something so special that God had in my life.”

A Story Beyond Herself

After finishing out school in Ohio and moving back home to Tanzania, Elizabeth embarked on a successful career in the public sector while growing into her new role as a mother—eventually of two children—as well as the wife of both her children’s father.

Still, the desire to start a pregnancy center like the one that had served her with such compassionate care stuck with Elizabeth, and with her mother. Though life circumstances, including the untimely death of her father, kept Elizabeth and her mother from establishing Life Seed for several years, by 2015, the calling became too strong to put off any longer.

“In 2015, it became hot, and when I say, ‘hot,’ I mean I have to stop what I’m doing and start doing pro-life work,” Elizabeth said. “I surrendered to God and started doing what I needed to do.

“It was not easy, but the call was there with me. To accomplish the calling, I had to go through a difficult journey, especially spiritually. God was bringing spiritual people into my life. In Tanzania, when I would tell my story, people would say, ‘I think that God has a purpose in your story that goes beyond just you and your son.’”

Tapping Into a Worldwide Movement

Elizabeth had kept up her friendship with the volunteer at the pregnancy center, and she’d brought up starting the work in Tanzania over the years. But, when she would bring up the idea on one occasion, her friend in the States cautioned her to wait until she was more prepared—particularly in her spiritual life.

When Elizabeth called her friend in 2015, however something was different in her voice. Now she was ready to start the journey to establish a pioneering pro-life effort. The only question left was how.

That search led her to a network of pregnancy centers based in Zambia called Association for Life of Africa (AFLA), which serves 135 local centers in 20 African nations.

“My friend in America said, ‘Why are you struggling? Let me connect you with AFLA,’” Elizabeth said. “I thank God for these partners who walked me through it. It was just a miracle. ”

Even the timing of Elizabeth’s connection with AFLA was an act of providence. Just two weeks after she reached out for the first time, the Zambia-based organization was scheduled to host its biannual conference in—of all places—Tanzania.

But there’s more to the story. Around the same time Elizabeth was finding help during her unexpected pregnancy in Columbus, AFLA’s founding director, Barbra Mwansa, was in the planning phases of launching her network.

Mwansa, as it turned out, had flown to the States to meet with Hartshorn and Heartbeat International for training around the same time Elizabeth was receiving help at Pregnancy Decision Health Centers—just two floors below in the same Central Ohio building.

“God was doing both of those things in the same building at the same time, and we had no idea,” Hartshorn, who served as Heartbeat International’s president for 22 years before transitioning to her current position as Chairman of the Board in early 2016, said. “We’re so grateful that God has given us a glimpse of this 15 years later, and we can only wonder what he’s got in store for years to come, and in generations to come.”

Bringing Light to the Dark Continent

Having gone through two abortions herself, Mwansa began reaching out to post-abortive women and those at risk for abortion in her home country of Zambia in 1998, establishing a ministry called Silent Voices—which has since saved the lives of over 8,000 babies.

In 2001, Mwansa began to take her work to neighboring countries, working alongside Heartbeat International and other U.S.-based partners, including Beautiful Feet International, to bring life-saving services to African nations that have used herbal remedies for abortion as birth control for generations.

“Pro-life in Africa is a new concept to a lot of people,” Mwansa said. “The church leaders, even the bishops don’t really understand what it means. When I started Silent Voices, the first people who were discouraging me to start it were church leaders. I was explaining to them the conviction I was having just to go and establish something, but they never supported me.”

One pastor who did support Mwansa was her husband, Edward, who serves alongside her in the mission. As they went on to start and strengthen pregnancy help efforts in neighboring African nations, the Mwansas were joined by another pastor, Stanley Msiska, who overheard them speaking to a fellow passenger on a bus and asked what he could do to help save lives.

A major thrust of AFLA’s effort is educating the church in Africa about the biblical teaching on the inherent value of life, starting with church leaders. From there, AFLA mobilizes the local church to start hands-on ministries of their own.

“We are strongly using the Bible and biblical principles to uphold the true sanctity of human life, where God himself has truly come out in Genesis 1:27 to say that we are images of God,” Mwansa said. “We’ve been going in churches and taking this message to pastors and other church leaders. When a pastor hears this biblical teaching, it’s like it becomes new to them, and then we bring in the issue of how human beings are being devalued on the continent of Africa especially.”

With the pro-abortion Guttmacher Institute estimating 405,000 abortions per year among Tanzania’s overall population of 45 million, Elizabeth’s Life Seed Tanzania is one of just five pro-life support organizations in the country.

As is the case throughout many regions in Africa, human trafficking, rape and child marriage pose significant threats to women and young girls in Tanzania. Many of these human rights abuses are aided by both legal and illegal abortion, as perpetrators are allowed to continue exploiting victims without the need to care for the babies who are conceived as a result.

“Abortion is something they feel that their ancestors left for them,” Mwansa said. “You can just take an herb and you wash it away. That has been huge in all African countries. This is why we have been traveling from one country to another, and why we are so privileged to come into contact with Elizabeth in Tanzania—who also has the same desire to learn and to start a pregnancy center.