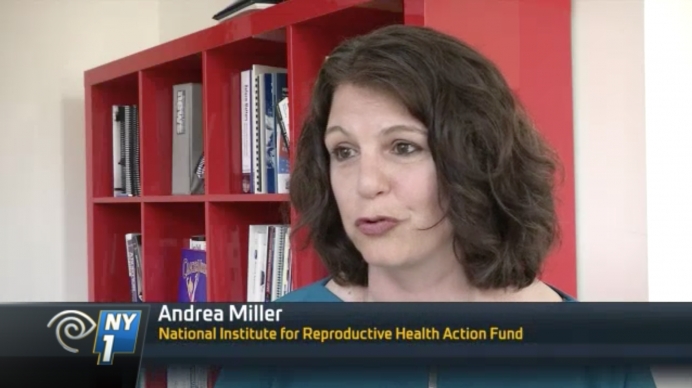 One New York abortion activist is fighting to keep car seats away from women in need. Screengrab: NY1

Maybe now would be a good time to drop the pretense and start calling things what they are.

In New York City, where four in 10 pregnancies end in abortion, Bridge to Life offers women in all five boroughs a desperately needed alternative. Serving in two locations—Flushing and Astoria—and hopeful of opening a third based on the demand for their care, Bridge to Life’s fully volunteer material assistance program reaches nearly 2,000 women and children every year.

Recognizing the value the organization brings to the community, two New York City Council members—one a Democrat and the other a pro-choice Republican—have pledged $5,000 each in discretionary funding for the upcoming fiscal year.

Naturally, “pro-choice” activists throughout the city that never sleeps have come unglued.

Before the ink had time to dry on the two council members’ signatures, NY1 reporter Courtney Gross had filed a story on the fact that “pro-choice activists” were appalled their fair city should be directing any funds at all to a nonprofit that gives away car seats, diapers, baby clothes and—most alarming of all—information on abortion and its life-affirming alternatives.

“In a city that has such an extraordinary wealth of organizations that do provide women with support and services, they shouldn’t be funding organizations that lie and manipulate women. That is simply not okay,” Andrea Miller, president of the National Institute for Reproductive Health, said.

Leaving aside Miller’s borderline slanderous allegation, it should be noted that Miller’s use of the term “extraordinary wealth” is a veritable Fort Knox of golden irony all by itself.

Consider, for starters, the fact that Miller presides over an organization worth just under $8 million that claims exactly zero dollars per year in program service revenue.

In other words, $8 million comes into the National Institute for Reproductive Health each year, but where does the money go? To women? To families? Children?

Not quite, though one woman—Miller, that is—does receive an annual paycheck of $155,000. For comparison’s sake, Bridge to Life takes in $153,000 per year—including its lucrative $10,000 gift from the City Council—and pays its stable of 30-plus volunteers a grand total of… wait for it: zero dollars.

Where does the money go for Bridge to Life? Almost all of the $153,000—precisely 92 percent—goes directly to New York women and families who need assistance, again in the form of car seats, diapers, clothing and more.

But the tomfoolery goes beyond a high-dollar abortion advocate’s gripes. When Miller says there’s an “extraordinary wealth of organizations that do provide women with support and services,” who, pray tell, does she have in mind?

Tweet This: Let's drop the pretense, shall we? #Abortion advocates aren't #prochoice, but anti-life.

To be fair, $34,000 of that is for “Infant Mortality Reduction”—whatever that means in doublespeak—but we’ll deduct it from the total just in case it doesn’t mean what it probably means.

Also, if you’re keeping score at home, you might want to jot down a couple of notes on your scorecard.

First, not a penny of National Institute for Reproductive Health’s $8 million annual budget goes to women and families in need. You won’t find a single receipt for a car seat or swaddle blanket if you comb through the financials.

What you may find instead, are receipts for six years’ worth of attorney fees New York City taxpayers forked over as their Council members fought to enforce an unconstitutional law against pregnancy centers in the city—a fact curiously omitted in NY1’s coverage.

Second, in spite of its doubleplusneutral name, the National Institute for Reproductive Health has remarkably little to say about reproduction or health. On its “What We Do” webpage for “Healthy Pregnancies,” for example, the only “achievement” to be found is an increased access to publicly funded abortion.

Tweet This: Pardon me, @nirhealth, but #abortion is not the same as "Healthy #Pregnancy."

Lest you blame the webmaster for his or her failure to differentiate a healthy pregnancy from an aborted baby, it’s perhaps helpful to note that one key partner listed on the site is Cherisse Scott, founder of Tennessee-based SisterReach, who recently stated publicly she wishes she had aborted her son.

Which brings us back to our initial question—isn’t it time we revisited using the term “pro-choice” for those, like Miller, who are so vigilantly dedicated to building an abortion-only empire that they alert the media when a government buys a couple of car seats?

Maybe the term we’re looking for here is, “pro-abortion.” “Anti-choice” or “anti-car seat.” would do just fine too.