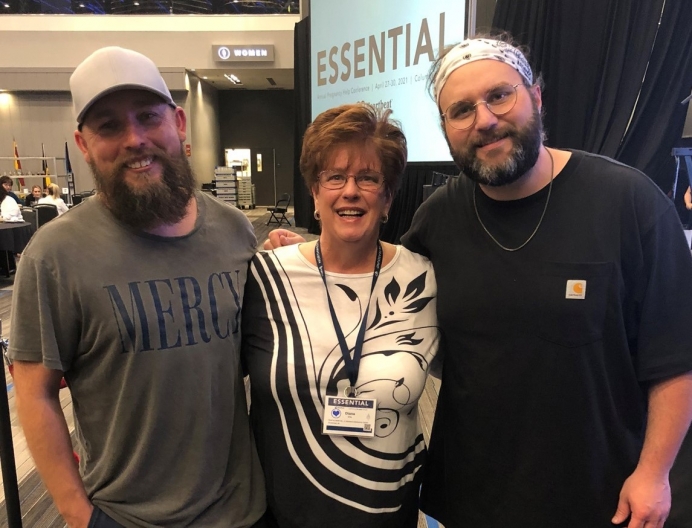 Followers of Jesus are instructed by the Apostle Paul to ‘put on the full armor of God,’ but sometimes, like David when he put on Saul’s armor to battle Goliath, we discover heaviness.

Pro-life and pregnancy help work is a battle, and whether after five years or 35 years, weariness can set in. Not only do staff and volunteers need the shield of faith, but they also need the encouragement by others to continue the fight. As King Solomon says, “A cord of three strands is not quickly broken.”

One pregnancy center director rediscovered her faith and received encouragement from others during the Heartbeat International 2021 Annual Pregnancy Help Conference.

“I was planning to retire, like soon,” said Diana Willis, founder, and executive director of Heart to Heart, A Women’s Resource Center in Indiana. “I was so weary, I felt I had nothing left to give anymore.”

She said she attended the conference primarily to bring her center’s Client Services Director, Amanda Warmuth, as Willis planned to pass the baton upon their return.

“I had been feeling depleted, but I went for her sake,” Willis said.

“From the very first session, I was so inspired and encouraged,” she said. “The conference gave me energy and focus.”

Tweet This: “From the very first session, I was so inspired and encouraged. The (Heartbeat) conference gave me energy and focus”-Pregnancy help director

She said she was especially moved by the talk given by members from the Christian music group We Are Messengers.

“Darren Mulligan broke through a lot of barriers for me with his message of ‘Just say yes,’” Willis said. “I came back with such fire and purpose.”

Although she still plans to retire, instead of leaving immediately as she planned before attending the conference, Willis said she will now take her time and help the transition be a smoother, less hurried process.

“We are seeking a new director, but it will be healthy transition,” she said.

Willis and Warmuth returned home as Heart to Heart’s annual banquet was set to start. Willis served as the speaker.

“We didn’t know a lot about how it was going to go because of COVID, so the banquet was stripped down,” she said. “I shared little snapshots of the conference, and it moved people. We had the least number of people in attendance, but we received the most money ever except for when we asked for funds to buy an ultrasound. I credit the Heartbeat conference for people coming through.”

She added, “It was a Gideon moment and affirmed that God is with us.”

Heart to Heart, located in Vincennes, Indiana, which is about two hours south of Indianapolis and one hour north of Evansville, became a medical clinic a mere six months before COVID-19 hit.

Founded more than 20 years ago, Heart to Heart is in a rural area, however, the community hosts a university, noted as the first college in the state. In 2011, a new center was built on property owned by a church, only a few blocks from the student center, Willis said. The plan was to pay off the building’s mortgage within five years; the organization became debt-free in just 75 days.

“We never borrowed a dollar,” Willis said. “God exceeds our expectations. There’s a saying, ‘God is always on time but He’s never early.”

She discovered that during the Heartbeat conference as well.

“Our tanks were empty, and we were flying low,” she said. “The conference was the wind beneath our wings – it was very uplifting.”

Tweet This: Our tanks were empty, and we were flying low. The (Heartbeat) conference was the wind beneath our wings–it was very uplifting- Diana Willis

“Diana’s situation reflects that of so many in the pregnancy help community,” said Kirk Walden, a former advancement specialist for Heartbeat International who also attended the conference and who has met Diana in the past. “Her renewed commitment speaks to the power of our encouraging each other.”

“We in the pregnancy help and pro-life movements need to encourage each other. I was doing pro-life work for 18 years before founding the center, and I’ve been attending conference for thirty-five years,” she said. “There was definitely a presence of the Holy Spirit at this year’s conference.”

“I just wanted to tell them, ‘Thank you,’” Willis said.

“The conference was the most challenging we’ve had, being both virtual and in-person,” said McDowell. “It was like planning eight conferences. Having someone give you positive feedback in the middle of the event was so uplifting for me and the staff.”

“Diana has an incredible heart for life and knowing she walked away from Heartbeat’s conference with a renewed calling tells me all I need to know about encouragement,” Walden said, “about why we need Christian artists like Darren [Mulligan], and about what ‘coming together’ as a body can do for all of us.”

“Amanda and I feel like we’ve made life-long friends,” Willis said. “There’s such a legacy over the years … at conference, you feel like you’ve always known them, people like Peggy Hartshorn and Kirk Walden. There’s no replacement for a genuine heart. Darren and the others … have a genuine heart. That energy and focus we received – it’s still on-going.”

She added, “There’s a wonderful quote from Mother Teresa: ‘God didn’t call me to be successful, He called me to be faithful.’ Our pro-life, pregnancy help movement – it matters to somebody somewhere someday. We just need to be faithful to His calling.”