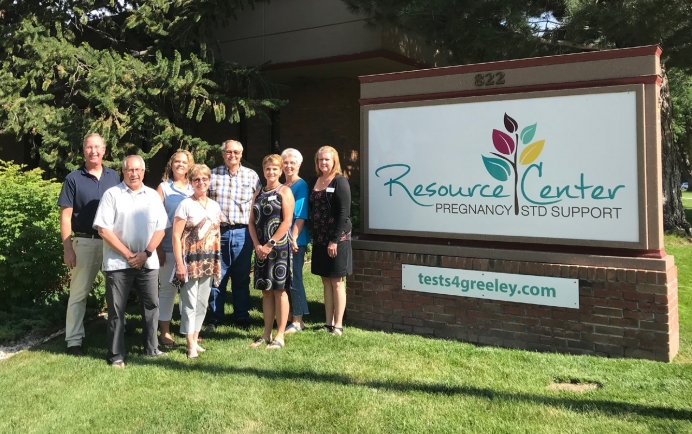 The Resource Center in Greeley, CO, continues to save lives and serve women Gail Holmes

The Resource Center in Greeley, Colorado, continues to experience many decisions for life, despite the many worldly challenges today, including pro-abortion activism.

Recently targeted through a misinformation campaign and other pro-abortion attempts to derail client traffic, the pregnancy center did not convince a legal arbiter earlier this year that abortion activists’ creation of a look-alike website mirroring its branding and URL and directing visitors to Planned Parenthood constituted domain infringement. The copy-cat site was accompanied by the common “fake clinic” abortion smear tactic through leaflets and social media.

Despite this, the Resource Center has not only maintained its client service numbers and prevailed through increased support in the community – the center has also seen twins saved through abortion pill reversal and the mother of another set of twins make a decision for her eternal life.

“Shay,” a 21-year-old mother of four, came to the Resource Center in April amid the COVID-19 crisis.

She believed stress had caused her period delay – she learned her husband was dealing drugs and they were divorcing. When Shay received the news of a positive pregnancy test result, her advocate described the woman’s reaction as “shock.”

A past client, Shay was vulnerable to abortion at this time because of her circumstances, said Terri Robinson, director of client services.

“She had a lot of difficulties,” Robinson said. “She came in not knowing she was pregnant; she just thought she was late because of all the stress. So that positive test was quite a surprise.”

The next surprise was even more shocking, for Shay, her advocate, and the nurse performing the ultrasound: twins were observed on the screen.

“She comes from a large family and has support from them,” Robinson said. “Her mother had two sets of twins.”

A third surprise that drew even more excitement for the Resource Center staff occurred when Shay positively responded to the Gospel message.

“This time, she really responded to the Gospel. She prayed for salvation, so that gave us quite a feeling of success because the Gospel had been shared with her before,” Robinson said. “That was three huge things in one day.”

Shay’s pregnancy is just one of several recent twin cases for the Resource Center.

“We’ve ministered in some way to seven sets of twins,” said Gail Holmes, executive director. “It’s so much fun, and just one of those things that brings smiles to people’s faces.”

One set of twins, born in February, was highlighted during the center’s March gala. The babies were born thanks to abortion pill reversal. Heartbeat International’s Rebecca Hagan, whose baby was saved through APR, served as the gala’s special speaker.

Abortion pill reversal is a protocol that involves giving extra Progesterone, the natural hormone in a woman's body needed for a pregnancy thrive, to counteract the first drug in the two-drug chemical abortion process (mifepristone or RU-486 first, followed by misoprostol). If taken in a timely manner after the first abortion pill, with the best chance for success within 24 hours, the Progesterone, which has been used routinely and safely with pregnancy since the 1950s, can result in the unborn child being saved.

“Not a single one had ever heard about it,” she said. “We were able to educate the doctors on this and immediately the OBGYN that was in the group said, ‘I will do that for us. I’ll get in and I’ll become part of that network.’ We got started within a month or two after that.

“We’re really excited that Heartbeat has really made a dent in making people aware that this exists,” she added. “I think we’d see a lot more of this if women just knew … that this was even possible.”

Tweet This: “I think we’d see a lot more of (Abortion pill reversal) if women just knew that this was even possible.”

She attributes the success of the March gala on the APR focus, between highlighting the twins and having Hagan speak.

“It turned out to be a wonderful evening, and it was financially the most productive gala we ever had. I think the APR (information) inspired a lot of people to give,” Holmes said.

Ministering to students and others

Serving a community of more than 107,000 people, the Resource Center has existed since 1982. Although the center has experienced several moves over the decades, the focus has always been to be close to the campus of the University of Northern Colorado.

“We’re not right across the street so that we’re painfully visible, where a girl would feel awkward coming in, (but) we know a lot of them come here,” Holmes said. “The basic truth nationally is that most vulnerable people group (to abortion) is this age group. We’re a great deal more convenient than the Planned Parenthood in Greeley.”

“I think we’re extremely diverse – in one day, you could have a Muslim couple come in and then have a lady who’s working on her master’s degree. We just never know,” she said.

Last year, the Resource Center and its satellite office in Windsor, located less than 10 miles south of Fort Collins, saw 530 clients. About 20% were assessed as abortion-minded/determined and about 45% were considered abortion vulnerable, Holmes said.

Over the years, center staff and volunteers have experienced “divine interventions, divine redirections, where God would re-direct (a woman’s) steps here so we could educate her on abortion,” Holmes said.

One of those cases involved a university student.

The woman, who was engaged, told her advocate she did not want to be pregnant during her senior year of college and planned to abort. Ironically, that advocate had been a UNC student who experienced an unplanned pregnancy and had carried her baby to term.

“She met with the client and talked with her and said, ‘You can do it – you can finish college while being pregnant. You can get your degree – I did it,’” Holmes recalled.

However, the woman was not convinced. She and her fiancé traveled to Fort Collins. As they sat in Planned Parenthood’s waiting room, a divine intervention occurred, Holmes said.

“The woman gets on Facebook (from her phone),” Holmes told Pregnancy Help News. “It just so happened that day was the one-year-birthday of our advocate’s little girl, and she (the advocate) posted a cute picture.”

“The couple is staring at this cute little girl,” continued Holmes. “Suddenly, this man and woman, sitting there in the Planned Parenthood waiting room said, ‘You know we can’t do this.’ They walked out of the clinic.”

“They eventually had the baby and got married,” she said. “The woman graduated, and she sent us a picture of her in her UNC cap and gown. People can be saved from abortion at the very last minute, sitting right there in the waiting room.”

Although the Resource Center cut back its services during the worst of COVID-19, in particular the STD offerings, they did not shut down.

“No way are we stopping those pregnancy tests – that’s life and death,” Holmes said. “We’re back at 100-percent now, including STD testing and treatment.”

Holmes and her staff will continue serving the community of Greeley and reaching women vulnerable to abortion. Some may be among those living in a newly constructed nearby high-rise. Wherever there is a need to serve, they will do so.

“We have opportunity to reach about 200 more people,” Holmes explained. “We’re not sure yet just how we’ll do that, but we’ll figure it out.”