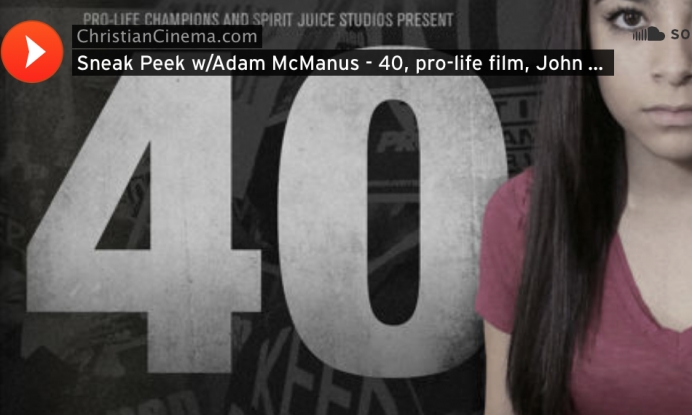 At first blush, John Morales is an unlikely candidate to direct and produce 40, a pro-life documentary that looks at the pro-life movement 40 years after the egregious Supreme Court Roe v. Wade decision which has led to the murder of 55 million baby boys and girls. He’s made a career as a television sports reporter in Chicago, Detroit and Houston.

Seems like a duck out of water. But, upon closer examination, it makes a lot of sense.  Morales revealed to Adam McManus in the podcast below that when he was in his 20’s, he was pressured to pay a girlfriend $250 to get an abortion despite his pleas that she choose life which “left a hole in my heart”. And then, years later, when he and his wife were unable to conceive, they adopted a son named Joseph who is seven today. So, he’s experienced both ends of the abortion debate as it were.

Perhaps the most unique element about 40 is that Morales went out of his way to interview secular pro-life activists as well as Christian ones. Ultimately, all truth is God’s truth. Pray that the pro-life unbelievers in the film will come to a saving faith in Jesus Christ as a result of their exposure to so many Christians in the movement. Plus, he interviews two former abortionists as well as six former abortion clinic workers who look back on their previous participation in the death industry with horror.

In addition, Morales devotes time to talk with those who were conceived in rape. Rebecca Kiessling’s mother had been brutally raped by a serial rapist and seriously considered, but did not get an abortion. Kiessling, an accomplished attorney whose story is entitled Conceived in Rape: From Worthless to Priceless, revealed that there are 32,000 rape pregnancies annually in America – 27,000 of which go to term.

Ryan Bomberger, who was conceived through rape, was placed through adoption into a large, multi-racial family. Ten of the 15 children were adopted. “You know, when you are born as a result of rape, like I was,” said Bomberger, “and you’re labeled as unwanted and unadoptable, it kind of puts you in a specific category. But my parents defied all that.

They shattered the myth of the unwanted. They loved me like crazy. And because they adopted me, they unleashed purpose in my life.” Today, he is married, the founder of the Radiance Foundation and has four children of his own, two of whom are adopted.

40 also examines whether a fetus is human, exposes Planned Parenthood and highlights the great work of 40 Days for Life where pro-lifers stand prayerfully in front of an abortion mill, hold signs and urge the pregnant women walking past to choose life which has helped rescue the lives of 10,000 babies.

Ted Baehr of MovieGuide wrote, "40 is a really good, highly informative, and extremely useful documentary presenting the arguments and realities favoring the pro-life position on the issue of abortion. It's an emotionally powerful and intellectually stimulating must-see movie."

Jewels Green, a post-abortive mother and former abortion clinic worker, said, “40 seamlessly weaves together personal stories of tragedy and regret with glimmers of hope and love to create a far-reaching tool for sharing the truth about what 40 years of legalized abortion-on-demand has given America: a culture of disregard for human life, and disdain and outright hostility toward those of us who choose to defend life."

And David Bereit, National Director of 40 Days for Life, proclaimed, “America has spent 40 years wandering in the wilderness following the unjust Roe v. Wade Supreme Court decision that imposed abortion on all 50 states. But today, the tide is turning, and our nation is on the verge of becoming a promised land, where the unalienable right to life is once again protected for every member of our human family. The groundbreaking film, 40, chronicles this sweeping cultural transformation, providing great hope through expert interviews, cutting-edge science, profound insights and shocking revelations.

“Every person of faith and conscience needs to watch this powerful film immediately and then take action. Hundreds of thousands of lives depend upon it.”

Morales can see the end of legalized abortion in America on the horizon in this generation. “One day – just like the Berlin Wall fell when very few people expected it to happen – one day we are going to wake up and there’s going to be a network announcer talking about how Roe v. Wade has been overturned.”

Get your copy of 40 right here.

Listen to Adam McManus’ other podcast interviews with Christian filmmakers and actors.

This article originally appeared at ChristianCinema.com. Reprinted with permission.