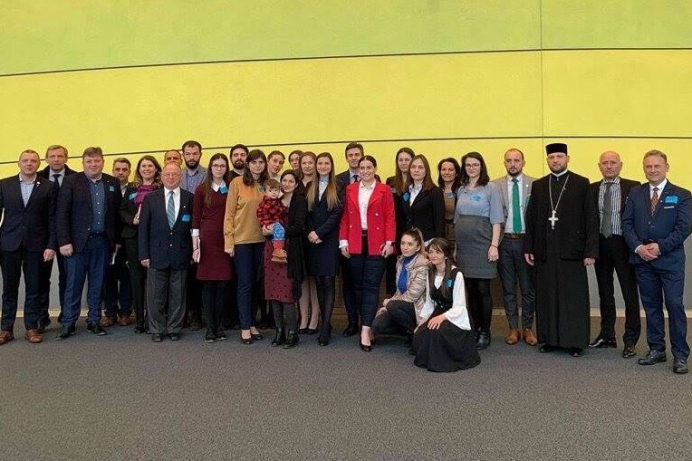 A troop of moms and pregnancy center directors made their way to European Parliament last month to share the importance of pregnancy help ministries. Photo Courtesy: Alexandra Nadane

Inspired by the annual Babies Go to Congress in the US, the debut event focused attention on European women whose pregnancies become crises when they are confronted by discrimination in the workplace, lack of support services, and pressure or even abuse from partners, family, and friends.

Nadane said Romania has fewer than 20 pregnancy centers. And those centers find very few government-supported agencies exist to help them addressing pregnant women’s multiple needs. “The centers must try to solve almost all the problems of women in crisis,” she said. This kind of problem across Europe prompted her to gain an audience before the Parliament.

In Romania, she said, the country’s 50-year history of legalized abortion has created a situation in which doctors presume abortion is the only option in unexpected pregnancies, rather than seeking to understand the pressures a woman may be facing and helping her find a life-affirming solution.

Nadane, moderator for the two-hour parliamentary event, focused discussion on the stated topic, “Beyond the pro-life v. pro-choice debate, there is room for the EU to support women in pregnancy crises.” While keeping politicized debate out of the discussion was a challenge, she said, “The testimonies helped a lot.”

Tweet This: “Beyond the #prolife v. #prochoice debate, there is room for the EU to support women in pregnancy crises.”

Hard to Argue with Experience

Babies Go to the European Parliament sessions opened with personal stories from women who came face to face with the painful realities of unexpected pregnancies—their own and others’. Those realities highlighted the dearth of agencies and medical or mental health professionals capable of supporting women under economic, physical, or social duress related to pregnancy.

In that light, Nadane said, “I invited the listening parliamentary leaders to think about potential support alternatives in this matter, since actual support was what was missing.”

The speakers represented many walks of life.

Daniela Bălinișteanu, a journalist from Iași, Romania, said she was pressured to abort her third child, Ioana, who was diagnosed with acrania. Only her husband battled beside her for their child’s life. Together they went on to share Baby Ioana’s six hours of life after birth.

Adelina Fronea, a psychologist and human resource expert for 15 years, told how an abortion at age 19 ruined her life until she found redemption in Christ. Fronea said she is now developing an on-line portal for counseling women in unexpected pregnancies.

Simona Mihălescu and Dana Ardelean each described a personal journey through an unexpected pregnancy. Those experiences, they said, led both of them to launch pregnancy centers to meet the needs they had once faced.

Mirela Letiția Felderean, a neonatal doctor in Cluj, Romania, related her repeated searches for supportive solutions to offer to pregnant women in crisis. She said the women she helped are now enjoying life alongside their children.

Angela Mitu, a student in Bucharest, told how she and her friend Daniel helped out a young woman being pressured by her family to have an abortion.

Ioana Picoș, a pro-family activist, told of counseling and encouraging women in unexpected pregnancies, inspiring many to choose life. 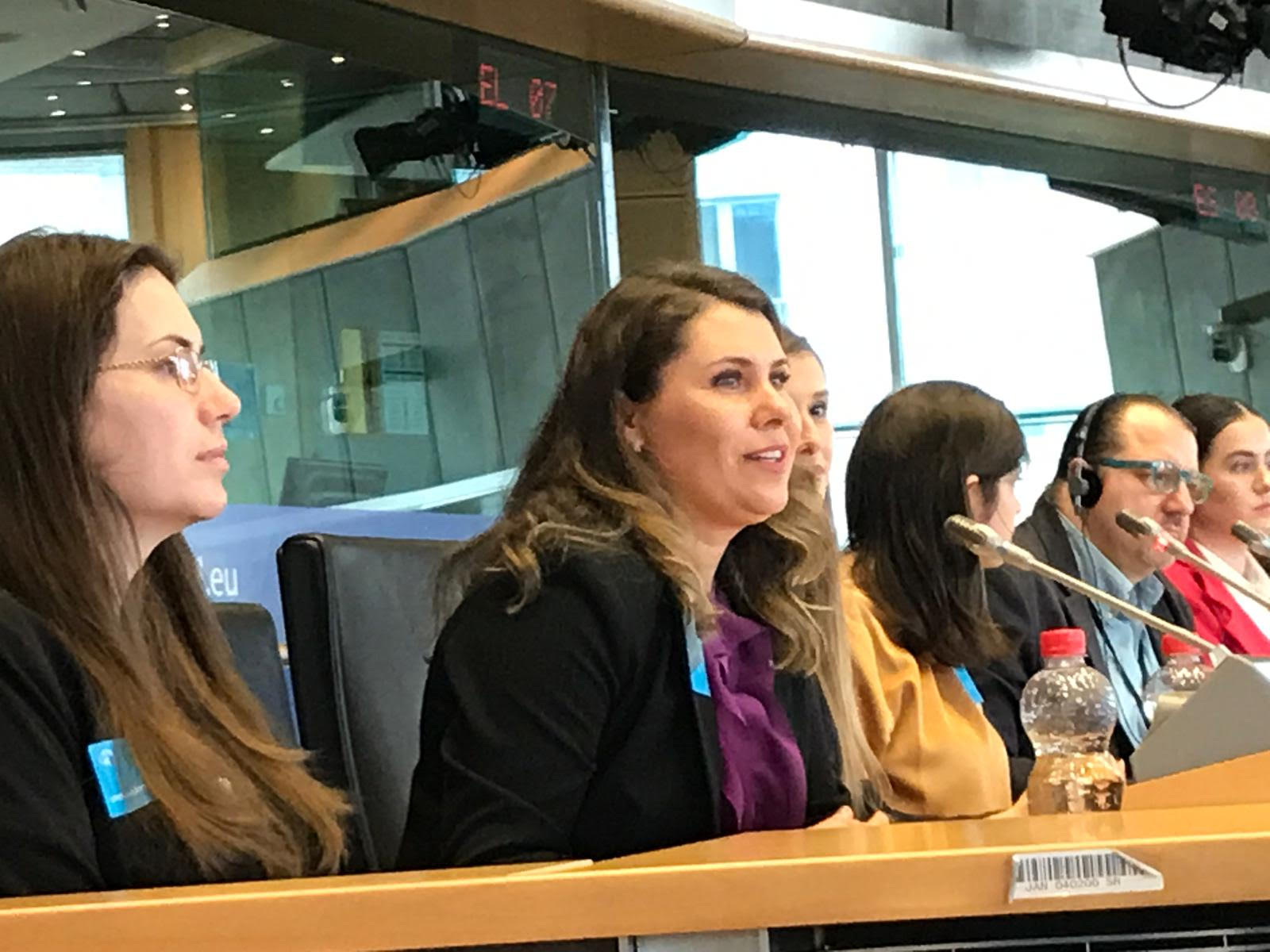 Moms and pregnancy center directors highlighted the pressing need for pregnancy help, based on their own experiences. | Photo Courtesy: Alexandra Nadane

In the discussion that followed the testimonies, MEP Branislav Škripek of Slovakia, President of the European Christian Political Movement, said he was impressed by the women who had navigated such difficulties around an issue which had only come to his attention recently.

Škripek serves as a substitute member on the Committee on Women's Rights and Gender Equality, a group which includes noted pro-family MEP Anna Záborská, who also attended the Babies Go to the European Parliament event.

MEP Cătălin Ivan, whose openness to helping orchestrate the event had originally surprised Nadane, told her that listening politicians were moved to tears by the women’s testimonies.

But engaging lawmakers’ emotions was only the first step. Nadane wanted them to take action.

To that end, her second set of speakers represented varied pro-life organizations with proven success in addressing women’s needs in unexpected pregnancies. Additional speakers spelled out specific policies and activities they hoped to see the European Parliament set in motion:

● Social workers could be trained to address pregnancy-related issues, according to Mirela Andrei, a social worker with Saint Alexandra the Empress Counselling Centre for Parents and Children.

● Fr. Ilarion Mâță, inspector with the Social and Philanthropic Sector of the Archbishopric of Roman and Bacău, underlined the need to develop local networks of support centers.

● Professor Theodora Vild spoke about the importance of increasing education and fostering a mindset that would value pregnant women. 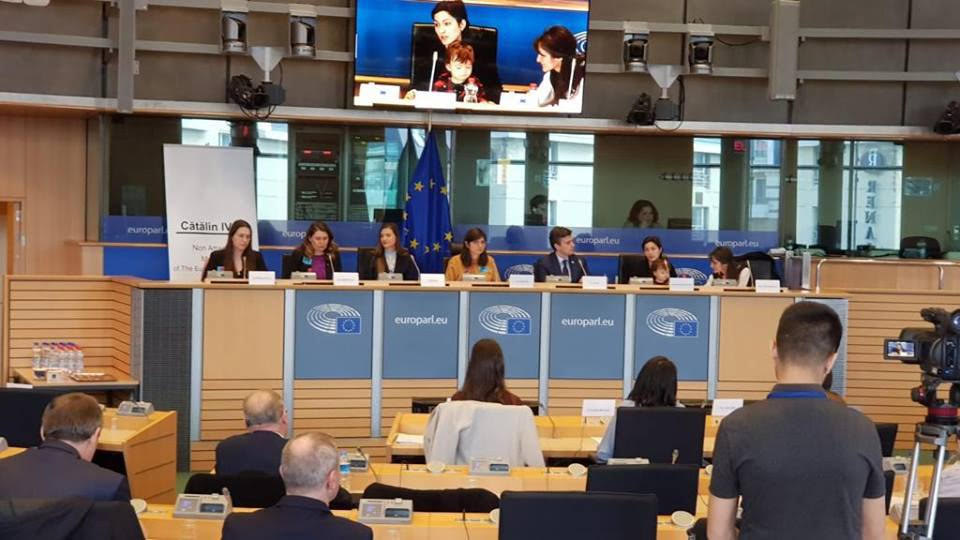 “He spoke about getting counseling centers in as many cities as possible, creating public policy that values the status of pregnant women, and eliminating discrimination in the professional environment and in society,” Nadane said.

While she felt it is too soon to tell what fruit the first Babies Go to European Parliament may bear, Nadane saw the inaugural event as a success.

“This was the result of a long series of events held in Romania and the Republic of Moldova in recent years—in particular, the March for Life, which has been instrumental in bringing the pregnancy crisis phenomenon to the attention of the general public,” she said. Last year, Nadane also initiated a Babies Go to Romanian Parliament event, which was held the day before the event in European Parliament this year.

Next Year in Brussels?

Because Nadane was only given two weeks to pull together the first Babies Go to European Parliament, bringing representatives from multiple countries was difficult this year. The time limit prevented all but one mother from obtaining a visa for her baby, and kept most of the other nations’ representatives from joining in.

However, Nadane said she already has a waiting list of eager participants for next year.

“People from Malta, Italy, Spain, and Austria wrote to me,” she said. “We have good relationships with other pro-life organizations from Europe and with other people who work with the European Parliament, and they have promised to work with their MEPs.”

Nadane added, “Crisis pregnancy is a huge reality and it is impossible to tackle abortion and help women and children if we do not understand this huge and excruciating reality the women go through.”

Tweet This: “It is impossible to tackle #abortion & help women & children if we do not understand this huge & excruciating reality women go through.”