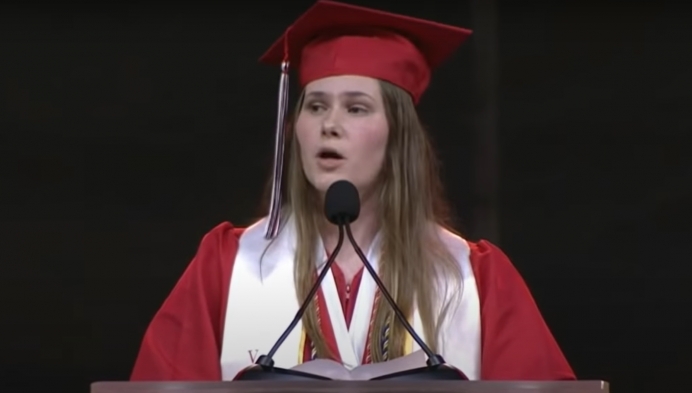 Paxton had a pre-approved speech on media content ready to go. However, as the time for her graduation grew near, “the more she was drawn to the conclusion that there was nothing more important that she could address with her time at the microphone.”

That “important” thing being Texas’ new heartbeat bill which Gov. Greg Abbot signed into law on May 19, 2021, and which goes into effect September 1, 2021. Paxton’s address was pretty short, and you can watch the entire clip or you can read the transcript of it here.

Paxton is undeniably a bright young woman — she is class valedictorian, after all. However, she makes several mistakes in her short speech and actually ends up exposing how society has failed women and mothers by making abortion seem necessary for success and equality.

She starts out by saying the Heartbeat Act will ban abortions “after 6 weeks of pregnancy.”

While this may be true in some instances, this ban is not a 6-weeks-post-LMP ban. It is a ban after detection of a heartbeat. A heartbeat can be detected as early as 6 weeks along — if a “good quality, high frequency transvaginal ultrasound” is used.

Important to note is that the text of the legislation does not require a specific type of diagnostic test to check for an embryonic or fetal heartbeat, which means doctors and abortion providers are not required to use a transvaginal ultrasound in the hopes of detecting a heartbeat as early as possible in pregnancy.

The bill only requires physicians to determine if there is a heartbeat in a manner “(1) consistent with the physician's good faith and reasonable understanding of standard medical practice; and (2) appropriate for the estimated gestational age of the unborn child and the condition of the pregnant woman and her pregnancy.”

If the physician determines a normal transabdominal ultrasound is what is standard medical practice, then a heartbeat may not be found until week 8 or even longer with that method.

Additionally, things like a tipped uterus and the mom’s BMI can affect being able to find the heartbeat. So, calling a heartbeat bill a 6-week ban is not correct.

Paxton also states, “most women don’t even realize they’re pregnant by then.”

Unfortunately, she seems to be parroting pro-choice talking points instead of actually looking into this claim for herself.

One fairly recent paper shows that even with multiple differences in age, ethnicity, education, socioeconomic status, and other factors, the average time women find out they are pregnant is 5.5 weeks. The overall range over all characteristics considered in the pool of women was 4.4 to 10.3 weeks, with the majority of respondents finding out between 5-7 weeks along.

There is really nothing out there supporting the notion that most women do not know they are pregnant by 6 weeks.

Anecdotally, I can attest to the fact that many, many women call Option Line seeking a pregnancy test after only being late for their period by one or two days, even women who have irregular periods or who are on birth control.

But besides the factually incorrect talking points she has probably seen all over pro-choice social media and news outlets, Paxton’s social commentary really got to me.

Paxton claims this bill takes the choice away from women to decide whether they can take on the responsibility of bringing another human into the world, and that it takes away autonomy over her own body.

What she does not seem to comprehend — or what she is conveniently ignoring — is that both men and women have complete and utter control over their reproductive decisions before pregnancy is ever a possibility. She’s a smart girl. I’m sure she understands how babies are made. And if you understand the reasonably foreseeable outcomes (pregnancy) of an action (sex), and you still decide to have sex, then you are making an informed decision (as all decisions you make ideally should be).

However, to then argue that killing a prenatal child via abortion is necessary to take control of your reproductive choices is morally bankrupt. I’d be interested to know if Paxton knows how abortions actually work, or how much she understands fetal development.

She’s absolutely correct in saying that having a child is a huge responsibility and will affect the rest of a woman’s life. However, being able to kill prenatal children to avoid the responsibility of gestation, birth, and/or raising that child is a choice no one should be able to make legally.

A ban on abortion does not in any way mean “control over our futures has been stripped away from us.”

Unwittingly, Paxton reveals abortion is a way for women to be seen as equal to men in our society: without the legal allowance to pay someone to kill our children and to model ourselves after the ideal body — childless (i.e., male) — we somehow become helpless creatures if we become pregnant while in school or working toward a goal.

This is absolutely false.

This societal narrative is degrading to women and to the equality we have long worked for.

In fact, there is more help now for pregnant teens, high school students, and college students than ever before.

Campus student groups and pregnancy help centers are available to help women in all walks of life by connecting them with other resources for support during and after pregnancy.

Tweet This: Pregnancy does not have to mean a stop to achieving your dreams or goals, nor an end to all you’ve looked forward to and worked for.

Framing not having the ability to legally kill our child as some sort of inequality is absolutely ludicrous.

And let’s be honest and not hide behind euphemisms like “women’s rights,” “bodily autonomy,” or “ending a pregnancy.”

Abortion kills a human being, and if we need to kill other humans to have equal rights with another set of humans, something is wrong with our idea of equality.

Tweet This: Let’s not hide behind euphemisms like “women’s rights,” “bodily autonomy,” or “ending a pregnancy.” Abortion kills a human being.

Abortion addresses no root cause of any issue which may be preventing a woman from achieving her goals. It does not solve poverty, it does not put abusers in jail, it does not prevent rape — it is a bad band-aid to a whole host of real issues.

Tweet This: Abortion does not solve poverty, does not put abusers in jail & does not prevent rape — it is a bad band-aid to a whole host of real issues

I am not going to deny that further change is needed in our highly competitive and individualistic American culture to truly bring about a change in how we think about pregnancy, children, and pregnant and parenting women, and how we help support pregnant women.

But allowing the killing of our children is not the way to go about this. It is incredibly sad for me to see fellow women having bought pro-choice lies wholesale and believing abortion is necessary for their equality in our country.