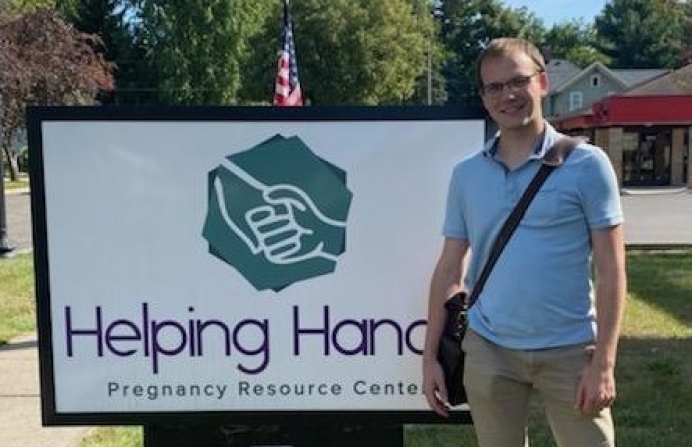 Passion for life, called to lead – Young pregnancy help director eager to inspire others to stand for life

While the financial and business world has a “market watch” website that offers analysis and endeavors to predict trends, one pregnancy help organization has just hired a promising young pro-life leader who just might be the next “Christ follower to watch.”

At 22 years old, Bryce Asberg is likely the youngest executive director of a pregnancy resource center (PRC). Helping Hands PRC of Hillsdale, MI, brought Asberg on board as the new director on September 2 of this year.

But even before Asberg started his higher education at Hillsdale College, his passion for life and willingness to take the lead was already central to his identity. and indeed, God’s call on his life.

Asberg asked his parents at age nine about abortion, and from there he was gripped by the burden he felt to protect the most vulnerable. As a freshman at Wilson High School in Tacoma, WA, Asberg founded Wilson Students for Life (WSFL).

WSFL was in the news going into its second year in February 2014. School administrators were forbidding its posters to be displayed while allowing those of other groups, clearly violating federal law (Equal Access Act).

One poster read, “Since Roe v. Wade 1/3 of our generation has been aborted.” The sign had a photo of a baby on a milk carton with the typical “MISSING” message used when children go missing.

The second poster quoted President Ronald Reagan, “I’ve noticed that everyone who is for abortion is already born.”

The administration was quoted by news sources (Breitbart, Life News, FOX 13 News Seattle and Ben Shapiro) as only allowing posters that, “Do not offend staff or students, put others down if they have a different

belief/opinion, or otherwise cause disruption.”

This was the first of a series of decisions the WHS administrators made including prohibiting WSFL from holding a day of silence (again, another activist club was permitted to do this at the school) calling this “too controversial” to allow.

The Thomas More Society stepped forward to defend WSFL, and Asberg delivering the legal non-profit’s letter to school administration was yet another opportunity for him to stand up for life.

FOX 13 News in Seattle quoted Asberg on the matter:

Asberg served as the policy director for Hillsdale College for Life which enabled him to build relationships with pro-life legislators and included organizing students to canvas in battleground races.

When Helping Hands PRC announced Asberg as the new executive director in September, the center’s statement said, “Bryce comes to the ministry with substantial background in pro-life work and a passion for the Gospel of Jesus Christ.”

“This is a game changer,” commented Asberg. “We have multiple sonographers willing to volunteer in our center.”

Looking forward, Asberg has a vision for Helping Hands to make an impact where his pro-life battles started—in the schools. By next fall he hopes to partner with the local schools in providing preventive sex education for students.

“I firmly believe that men have a part to play in the pro-life movement and ultimately abortion isn’t going to end until men stand up and take responsibility,” Asberg said in an article for Hillsdale College’s Collegian.

This young man who has made this important calling his life’s work looks forward to reaching out to the abortion vulnerable in his community, especially those who do not know about the services available, to get them the help they need.

“We are so eager to help the men and women in those situations,” Asberg said.

Tweet This: “We are so eager to help the men and women in those situations” - 22 yr-old pregnancy help director Bryce Asberg on the abortion vulnerable