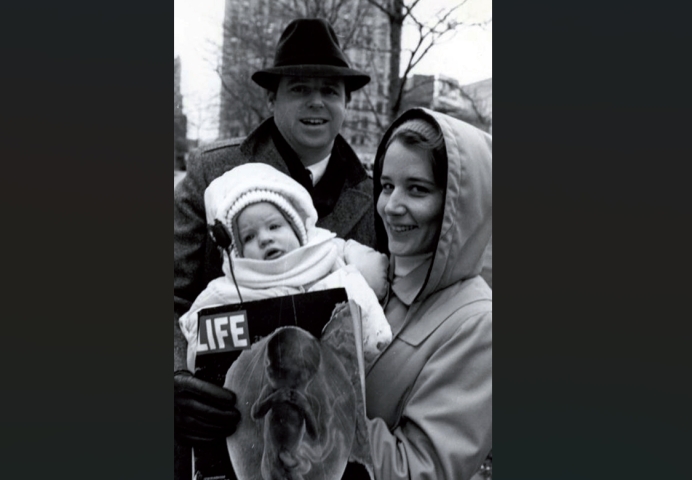 Dr. Peggy Hartshorn with husband Mike and one of the children at an early March for Life Heartbeat International

What does the culmination of a 50-year longing for the wrong of Roe v. Wade to be made right look and feel like?

“I started getting texts from people that I had and still was working with in Heartbeat, that I’ve worked with for years and years,” Hartshorn said. “People that actually worked with me in Right to Life back in the ‘70s, just dear, dear people who were so excited and wanted to say, isn’t it wonderful.”

“I was just overwhelmed with sentiment and emotion,” Hartshorn said. “I just couldn’t stop crying.”

The start of this journey was one of “shock and dismay” as Hartshorn described when she first heard of the Roe v. Wade decision news on January 22, 1973.

The news came over the radio as Hartshorn, then a graduate student, was driving north on High Street in Columbus, Ohio, toward Ohio State University.

“The Supreme Court of the United States, ruling in a case called Roe v. Wade, had declared unconstitutional every one of the existing state laws that restricted abortion,” the newscaster had stated.

“In one fell swoop, they had declared unconstitutional every state law in our country that protected unborn children and their mothers from abortion,” Hartshorn wrote in the memoir The Power of Pregnancy Help, which she co-authored with current Heartbeat International President Jor-El Godsey.

“At first I could not believe my ears,” Hartshorn continued. “Then I thought that as soon as I saw my husband (Mike, an attorney in his first year of practice), I would ask him to go to the library and get a copy of the decision.”

“If this news was correct, I knew I had to do something,” she said. “For me, this was a never-to-be-forgotten day, seared into memory like other days in history when the United States suffered surprise attacks.”

Later that day in January 1973 day she called Columbus Right to Life and said, “What can I do to help?”

Today Hartshorn still carries a deep determination to stay with the battle toward the goal: To make abortion unwanted today and unthinkable for generations.

“Who are some people that you wish could be here to see this decision and overturn of Roe v. Wade?” Hartshorn was in the WOLRD Magazine interview.

Hartshorn acknowledges that she stands on the work of these pro-life warriors, yet many more people have also benefitted from the sacrificial service of her advocacy.

In the late 1970s when Hartshorn and her husband Mike would hear of pregnant women who felt pressured to abort their child because of lack of support from friends and family they opened up their home and housed them.

“In 1975, when Anne, the first of our 12 ‘girls,’ came to live with us in Columbus, little did we know that God was preparing us for a lifetime calling in the other arm of the pro-life movement” Hartshorn wrote, “the service arm, or the ‘alternatives to abortion’ movement.”

At the same time, her involvement with Right to Life opened Hartshorn to encounters with women experiencing post abortion issues. These experiences eventually led her and her husband to start a 24-hour pregnancy help hotline and pregnancy center.

The Pregnancy Distress Center opened its doors officially on January 22, 1981, after months of the Hartshorns operating the hotline from their home.

Today that center has been renamed Pregnancy Decision Health Centers (PDHC) and it has continued to be at the forefront of pregnancy help.

Continuing her reflection on learning about Dobbs, Hartshorn said:

“I shot up a prayer to the Lord, ‘Thank you, Lord. Thank you, Lord. For these people as, not just for the decision, but for these people.’ People that He had called for so many years into this, and even there was one lady that I haven’t seen for years, but the bond was there. The brothers and sisters in Christ that we had worked together for so long and God had called all of us. And we knew it.”

“The overwhelming sense that, although it was 50 years, somehow the time seemed very short,” Hartshorn stated. “It was so strange. So strange that it seemed like a short time.”

Hartshorn further recalled her thoughts, with her husband at her side in that moment, in regard to his support.

“He’s just been invaluable in many ways,” she said, “as a wise advisor, as a board member to our pregnancy center, in Heartbeat, and just my constant support.”

“He’s been there through the years,” Hartshorn said tearfully, her voice breaking. “So, it was neat he was there too.”

Heartbeat International had filed an amicus brief with the Supreme Court in the Dobbs case.

The prevalence of pregnancy help centers demonstrates why women do not need abortion, the brief argued, and services have increased to meet the needs of women in crisis pregnancies including medical, housing, material aid, and more.

Hartshorn pointed to the amicus brief’s statements which were alluded to in the Supreme Court’s Dobbs decision.

“It’s an antiquated dichotomy that you have to choose between children and having a place in society,” she said.

Tweet This: “It’s an antiquated dichotomy that you have to choose between children and having a place in society”

Hartshorn reflected on the need to celebrate the Dobbs victory and continue the work into the next 50 years, saying, “This is the beginning of a new phase of the pro-life movement, obviously, now it’s back to the states where it was before 1973.”

“But the good thing for pregnancy help movement, we stay the same,” she said. “We grow bigger.”

“We do have challenges, absolutely,” said Hartshorn. “The abortion pill being the main one and the fact that there will be people going to the abortion destination states, those are big challenges. How are we going to serve?”

“I have no doubt that we will be there for the next 50 years,” said Hartshorn, “and our centers may look different.”

“God is going to do great things,” she added. “Our ultimate goal is to make abortion unthinkable.”

Tweet This: “God is going to do great things. Heartbeat International has a plan.”