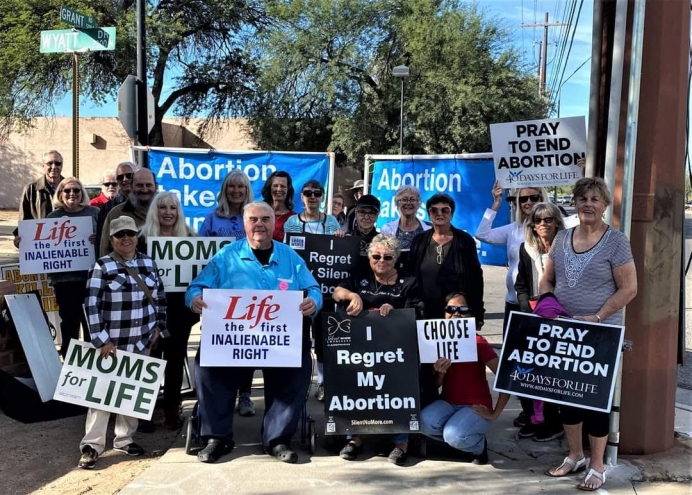 (OverturnRoe) Widespread rallies across America on December 1, 2021, received major attention as the United States Supreme Court heard arguments in Dobbs v. Jackson, a case that holds significant implications for the future of abortion in America. OverturnRoe.org, a national pro-life coalition, hosted rallies and highway overpass banner displays in 124 cities throughout the country, and in front of the United States Supreme Court.

“The Supreme Court is almost certain to uphold Mississippi's 15-week ban,” observed Eric Scheidler, a key coordinator with the OverturnRoe.org coalition and Executive Director of the Pro-Life Action League. “It’s harder to say if they will overturn Roe v Wade. Justices Thomas, Barrett, Alito, and Gorsuch seemed to be leaning that way; Justices Kavanaugh and Roberts are harder to read.”

“The pro-life movement is flush with optimism and energy,” Scheidler noted. “We outnumbered the abortion supporters at least three to one at the Supreme Court. The pro-abortion movement is downcast and desperate. Their mood at the Supreme Court was angry and miserable. They know a big loss is coming their way. They seem more convinced than we are that Roe is doomed.”

Tweet This: The pro-life movement is flush with optimism and energy. We outnumbered the abortion supporters at least three to one at the Supreme Court.

Hundreds of national, regional, and local life-advocacy groups gathered outside of federal courthouses, government buildings, abortion facilities, and other locations in the public square to urge the Supreme Court Justices to overturn Roe v. Wade.

Tweet This: Rallies were held across America as the Supreme Court heard Dobbs v. Jackson arguments, w/significant implications for abortion in America

The Mississippi law at issue in Dobbs v. Jackson bans abortion after the child is at 15-weeks’ gestation. The case has gathered substantial attention from both life advocates and abortion backers because it is the most significant challenge to Roe v. Wade to rise up in the courts in more than a decade.

“It added unique emphasis to be standing in front of the federal building named for Warren Burger, who was Chief Justice of the United States Supreme Court when the Roe v. Wade decision was issued in 1973. Burger selected his boyhood friend and fellow Justice Harry Blackmun to write the decision. Burger and Blackmun both grew up within a few miles of the courthouse that now bears Burger's name.”

In Tucson, Arizona, life advocate Bob Pawson joined a prayer vigil outside of a Planned Parenthood abortion facility as other activists displayed large pro-life banners and signage a block away.

Pawson called the gathering a “smashing, exhilarating success,” and observed that the Planned Parenthood abortion “escorts” seemed “awestruck” by the pro-life turnout.

The high court is expected to issue a final ruling on the case in Spring 2022.

Editor's note: OverturnRoe is a is a coalition of pro-life American devoted to restoring legal protection to unborn human beings. The coalition is led by three organizations: Citizens for a Pro-Life Society, Created Equal, and the Pro-Life Action League. For more information, visit overturnroe.org.