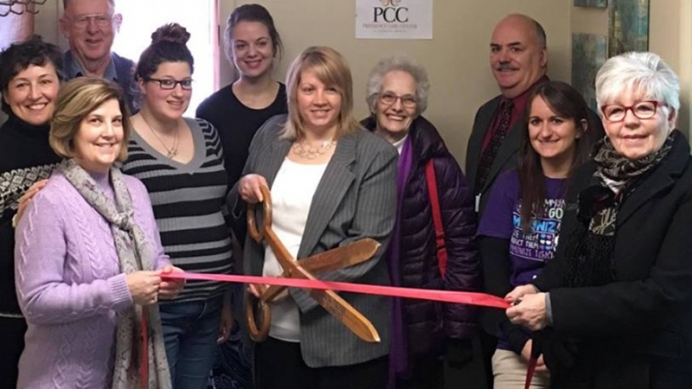 Wilkins and board members at the opening of The Pregnancy Care Center of Oswego County last January Photo Courtesy: Theresa Wilkins

The shame of abortion can leave women in the dark of abortion—especially church-going women. That is a truth that Theresa Wilkins, executive director of The Pregnancy Care Center of Oswego County in New York, knows all too well.

That’s why the The Pregnancy Care Center of Oswego County is starting a monthly anonymous Post-Abortion Counseling Education (P.A.C.E.) conference call on June 9.

Post-abortive clients can fill out a confidential form to have the course book mailed to them and dial in at 10 a.m. on the second Saturday of each month. To grant even more anonymity, a PDF version to download from the website is in the works.

Though the Oswego pregnancy center offers one-on-one counseling using the book “Forgiven and Set Free,”  not many clients have taken advantage of that service. According to Wilkins, many post-abortive women have hardly told anyone about their past—especially not their brothers and sisters in Christ.

“Some of the other centers we’ve talked to have tried to do group settings,” Wilkins said. “Now, if you get a churched woman where nobody in her church or even her best friends know that she’s post-abortive, she doesn’t know who she’s going to walk in and see.”

Wilkins had her own unexpected pregnancy when she was 18. Because the man she was with did not want the baby, she turned to abortion. Her life fell into promiscuity, drugs and alcohol. Wilkins had grown up in a financially comfortable family, but as an adult, her finances declined due to her poor life decisions. Eventually, she ended up living on welfare.

Then, when Wilkins was 32, she knew she needed a change in her life. After a friend invited her to an Easter service, she started attending the church regularly.

One particular Sunday, when a guest pastor spoke, something hit home. Wilkins learned what it meant to have a relationship with Christ rather than just the church. She read the New Testament four to five times in her first year of being a Christian.

“For a lot of years, I really felt guilty about that abortion,” Wilkins said. “I really had to learn that I was forgiven so that I could forgive myself which didn’t really happen until I came to know Jesus as my Lord and Savior.”

A few years after Wilkins devoted her life to Christ, a woman at her church, who was the executive director of what was then the Crisis Pregnancy Center of Oswego County, spoke about the ministry, and Wilkins saw it as an opportunity to redeem her abortion experience. Wilkins got involved volunteering at the center, doing administrative work, delivering gifts to young client families, and eventually, training to become a post-abortion counselor.

However, as time passed, life happened—administrative changes occurred at the center, and Wilkins and her husband gained new responsibilities as grandparents. Wilkins fell away from volunteering at the center.

All the while, the only people who knew about Wilkins’ abortion were her husband and a few close friends. She did not tell anyone else, especially not her Catholic parents, until 2016, when she felt God leading her to pick up work again at The Pregnancy Care Center of Oswego County.

Wilkins was told she would be laid off from her work-from-home position in March 2016, so she immediately began praying and waiting for an open door. In the next week, she applied for and was offered a position as executive director of the center. After a week or two of working for the center, she shared her story publicly for the first time at their annual banquet.

“It was difficult to tell my story,” Wilkins said. “A lot of people don’t understand that journey. More Christians need to understand that you can’t walk in anybody’s shoes.”

God used Wilkins’ work-from-home experience in a unique way, inspiring her to teach via teleconference.

In the teleconference, Wilkins will share her abortion story and have one of the post-abortion counselors share their story to encourage women on the call to share their stories.

“It’s just going to let women know that God loves them and that He forgives them, and because He forgives them, they can forgive themselves,” Wilkins said. “We’re all going to regret the choice that we made forever and ever, but we can be forgiven. We can feel set free.”

Tweet This: “We’re all going to regret the choice that we made forever and ever, but we can be forgiven. We can feel set free.” #prolife