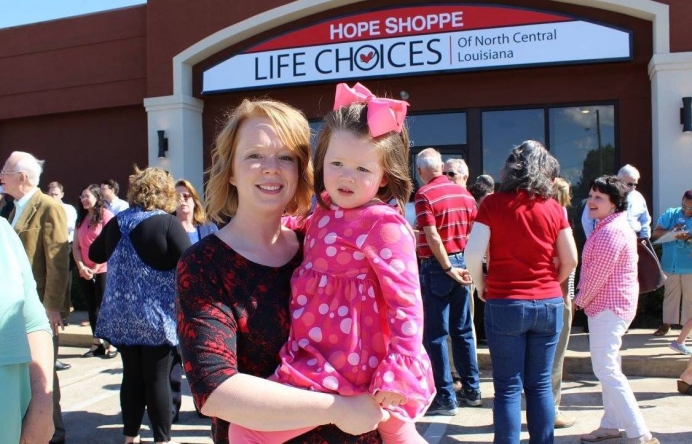 After 21 years serving women in a converted house, Life Choices of North Central Louisiana is meeting needs in a 7,000-square foot medical complex. While the setting has markedly changed, the life-saving mission is carrying on full-steam ahead.

Located in Ruston, a town of about 20,000 people along Interstate 20, Life Choices cut the ribbon on its new location April 6, serving student populations at Louisiana Tech and nearby Grambling State University.

“As a whole, pregnancy centers have to change generationally,” Richard said. “We offer a lot of services to our clients that live in generational poverty and generational single parenting, but we also want to be relevant to our campus millennials who go to a doctor’s office for health care, who are skeptical and have to research everything.”

The center’s new location is a five minute drive from Louisiana Tech and 15 minutes away from Grambling State, but its main benefit has to do with its surroundings as part of a medical complex, with a major hospital nearby and a large clinic across the street.

Richard is looking forward to seeing how the site helps Life Choices reach more clients than ever before.

With three separate suites, all connected but each with its own client entrance, Life Choices has more than enough room to host classes, operate its ultrasound and run its material assistance boutique.

“We have one main hub of health care in our city, and it’s right across the street,” Richard said. “So, we have credibility already for being in that hub. We’ve had to change with the millennial shift if we want to be relevant on our campuses.”

As Life Choices has grown over the past three years, space was running thin in its former location, which had been on loan to the center from a local church for over two decades.

“That house was a gift,” Richard said. “The home was free and it was warm and inviting, but as the staff grew, things started to get tight. And, we weren’t staying connected and relevant to our campuses. I approached the board three or four years ago (about a new site). We started praying and I started looking. This is beyond all of us, and what a journey it has been.

“I went to the Board and said, ‘We need to be keeping our eyes open and diligent about this process.’ The way we were growing, how tight everything was becoming, and the building we were in was showing its age—we needed a larger space.”

After visiting pregnancy centers in different states and looking at various properties to which Life Choices could move, Richard had developed a firm vision of what her center could be and do in a new location.

Then, in March 2016, her husband brought the location’s availability to her attention. By April, Life Choices had closed on the new location and was making plans to start renovation in November, leading up to the ribbon-cutting a year later.

“We’ve never had a note before,” Richard said. “I’d been saving since I became the director eight years ago. We were able to pay a down payment and the renovations. My vision is to pay the note off in five years or so.”

After the reconstruction, Richard and her team acted quickly to complete the move from their former location. The organization’s annual banquet was held March 7. The original location closed on March 9 and services at the new building began March 15.

Donna Hutto Edwards, wife of Louisiana Gov. John Bel Edwards, also made an impromptu visit to the center the week they started serving clients in the new location.

Life Choices’ sprawling new facility gives the organization room to add to its suite of services that already include free pregnancy testing, ultrasound services, parenting—including fatherhood—programs and a materials boutique.

Next up on Richard’s radar is to start offering hands-on training for basics like job skills and cooking to fill gaps in many of her clients’ skill sets. Life Choices, which serves as many as 650 individuals per year, is also looking at tacking on STD/STI testing to better reach the college community.