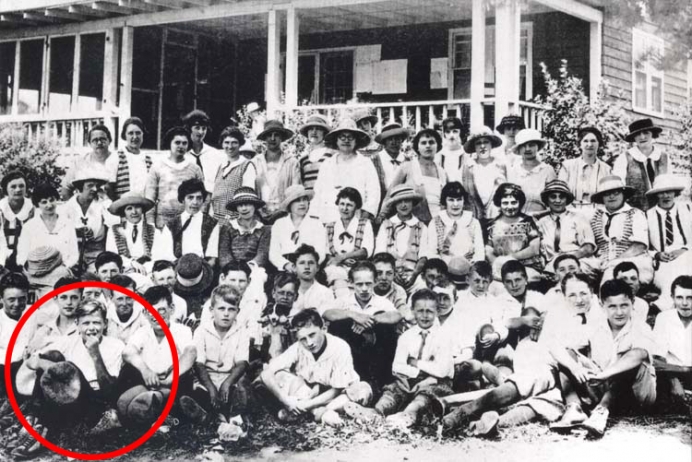 After speaking at an event recently in Dixon, Ill., I was standing in the hallway of a golf course clubhouse, preparing to sign a few books for attendees. As I usually do, I took a look around, and on the walls were photos of days gone by. I could see history in those photos, from the turn of the century (the last century) through the 1920s and 30s.

The photos were all black and white; outlining the story behind the golf course that lay beyond the windows. As one who once attempted to play golf professionally (I failed, but had a blast trying), the stories behind golf courses fascinate me.

One photo however, stood out. Taken in 1923, the photo is of boys in the front (pre-teens and teens), with golfing-attired ladies standing behind them. One young man, noted on a plaque underneath the photo, carries a big smile on his face.

He was an ordinary kid. A caddie, for goodness’ sake. Nobody seemingly special and certainly not perfect. As he would later tell a reporter chronicling his life, he was sent to the principal’s office more than once. At another point in his youth, he was arrested for throwing fireworks in the street (his father paid a fine of $14.85, quite an amount in the 20s).

Tweet This: “We are ordinary people, whom God can use to accomplish the extraordinary.” @KirkWalden

The photo depicts just another happy kid, likely tired after a summer day of carrying someone else’s golf clubs.

Did this boy know he would one day be known as he is today? Did he realize that young “Ron” would later become Ronald Wilson Reagan, 40th President of the United States?

While almost all children have dreams of what they might accomplish one day, he did not “know” who he would become. On that day in 1923, he was just a kid earning a little spending money and getting his picture taken at the end of the day.

One day, he would stand tall and declare those famous words—“Mr. Gorbachev, bring down this wall”-- that would spell the end—at least for a generation—of The Cold War.

But at one time, President Ronald Reagan was just “Ron.”

Because I had some extra time in Dixon, I dropped by Reagan’s boyhood home, open for tours most of the year. It sits on a non-descript street, along with houses still filled with working families. A clothesline hangs outside the home next door; to me, a reminder that those who accomplish extraordinary tasks are never born with “extraordinary” written on their foreheads.

The task before PHOs is beyond extraordinary. We are tasked with saving lives. We are called to be a part of changing lives and giving hurting people new purpose, new hope. Each day in PHOs across America and around the world, we take on this task without any thought of how the world will one day view us.

Tweet This: “The task before PHOs is beyond extraordinary. We are tasked with saving lives.” @KirkWalden

I don’t know what history foretells for us and for what we attempt to accomplish. For all I know, one day tourists will be traipsing through one of our childhood homes, saying, “This is where she (or he) would sit at the dinner table!”

Far-fetched? Probably. Yet, we do not know what the future holds.

In the end however, historians’ view of our work is not important. What is important is that we each remember we are ordinary people, whom God can use to accomplish the extraordinary.

Our mission is not about telling world leaders to tear down walls of oppression, as Reagan’s was. Instead, we are called to break down walls of indifference, of emotional hurt, and of fear in the lives of those we see.

Our reward may not be the restoration of our childhood homes to accommodate tourists. That’s fine with us.

I’ve got a feeling that one day, we are going to meet hundreds, perhaps thousands of people—generations—of those for whom we played a role in bringing into this world.

For a moment, think beyond one child. What about this child’s children? Grandchildren? Great grandchildren? When we think in terms of generations, how many lives are we now connected to?

Tweet This: “When we think in terms of generations, how many lives are we connected to?” @KirkWalden

One of Ronald Reagan’s great accomplishments was to play the key role in bringing down the Soviet Union. Today however, the world wonders whether in many ways, the old USSR is making a comeback. In just over 20 years then, this stellar achievement is in danger.

What we are accomplishing today however, will never be reversed, eroded or undone. Generations will reap the rewards of a life—just one—saved today.

I’m not sure I want tourists going through my boyhood home on Pine Hills Avenue in Auburn, Alabama anyway.  Let’s do something better. Drop by my house in Tennessee today, and let’s talk about how we are creating a new generation of life today, and building a culture of life for tomorrow.