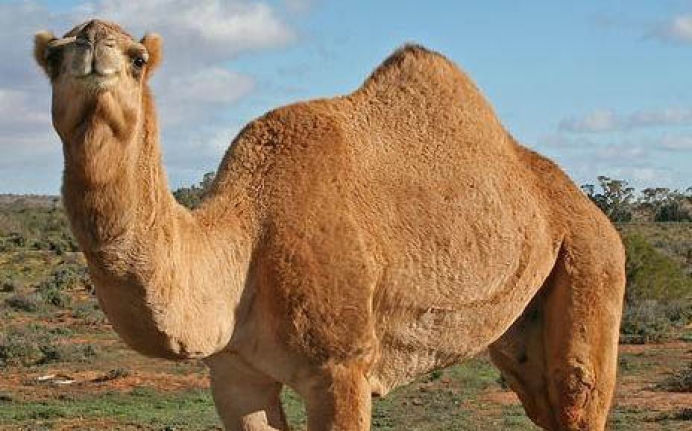 Oh, to be a 'Million Dollar Camel'

The other day my wife Jennifer and I—and our two youngest boys—had the opportunity to visit The Creation Museum outside of Cincinnati. I would be speaking in the museum’s banquet hall for Reach Out Pregnancy Center in Harrison, OH and when offered free tickets, we jumped at the chance.

The museum makes a powerful case for the Bible’s Genesis account of the earth’ beginnings, complete with exhibits, films, a lot of dinosaurs and in July, a life-sized replica of Noah’s Ark will be unveiled, just minutes from the museum.

Many features captured my attention, including the museum’s interest in the sanctity of life. In June, they will host a major symposium on the infamous Roe decision of 1973.

And yet during our visit, a camel—yep, a one-humped mammal—captured my attention. The four of us were wandering through the museum’s petting zoo and saw a couple of children strapped onto a camel, taking a short ride as grandparents snapped photos.

As any good father would, my first thought was, “How much?” The ride, I figured, would take 2-3 minutes.  Was it worth it?

“Five dollars per child,” I was told by a kind gentleman standing next to the camel. I quickly came up with an alternate idea, figuring that I could ride the camel and tell both of my boys what I experienced, thereby saving five dollars. But alas, they wanted first-hand knowledge. I coughed up a picture of Alexander Hamilton and they climbed on.

The camel began its saunter, seeming not to notice his new companions. While they took off to parts unknown (well, a circle covering perhaps 50 yards), I asked the name of the camel. I can’t remember the given name the kind gentleman gave me for our new furry friend, but I do remember him saying, “We call him our ‘Million Dollar Camel.’”

“He’s brought in a million dollars?” I asked.

Tweet This: “He’s brought in a million dollars?” I asked. “Yes, sir. At five dollars per ride.”

As a math whiz, within seconds I whipped out my smart phone, found the calculator function, worked on the problem without asking for (much) help and on my seventh attempt had the answer: 200,000 riders.

If we were to conduct an interview with Mr. Million Dollars, I doubt he would know his value:

Interviewer: Sir Camel, talk to us about this great accomplishment!

Million Dollar Camel: Well, I get up in the morning, then walk around in small circles with children on my back. It’s a living; they feed me well and for the most part, there is not much crying—except little Irving last week, but I digress.

Interviewer: But the results! You’ve generated one million dollars for the museum, opening the door for new exhibits. Thousands and thousands are capturing the message of God’s work in creating the earth—because of you.

Million Dollar Camel: Look pal, I don’t know if you’ve noticed, but I’m a camel. C-A-M-E-L. I walk around. Parents give my handler over there a piece of paper or two, and kids ride. That’s it. This is my world and welcome to it—but I’m not generating anything. I hope the kids are happy, but as for the museum . . . and by the way, what’s a museum?

My boys enjoyed their two-minute excursion. Soon the memory will fade (we’ve got photos, at least), but the dollars we spent will assist in building a museum’s future. The camel knows none of this.

What about those of us in the pregnancy help movement? I wonder if we can even begin to grasp the big picture. Sometimes, we see a child born through our work. We see a parent’s eyes light up in hope.

Tweet This: We see a child born through our work. We see a parent’s eyes light up in hope. #prolife #prolifegeneration

A person helped today may talk to a friend, thousands of miles away, and our impact is felt by those we never know.

In a sense, we are Million Dollar Camels. We feel sometimes as if we are simply walking in circles with a burden on our backs, dropping off one only to pick up another. All we see is the next step, unable to take in the enormity of our accomplishments.

Unlike the Million Dollar Camel however, one day I believe we will understand. We will comprehend . . . everything. Should the Lord tarry in his return, we will know of the children, the grandchildren and great grandchildren of those we’ve served.

We will know of their accomplishments. We will see—with clarity—how we had an opportunity to change the world and seized that opportunity.

Let’s never forget this. In a world where it seems we are sometimes making little or no progress as we trudge through our day, there is another world we cannot necessarily see. And there, events are taking place beyond our ability to comprehend. If we only knew.

One day, we will.

Kirk Walden is a senior writer with Pregnancy Help News, an Advancement Specialist with Heartbeat International and author of The Wall. For banquet speaking engagements, contact Gloria Leyda at Ambassador Speakers Bureau.