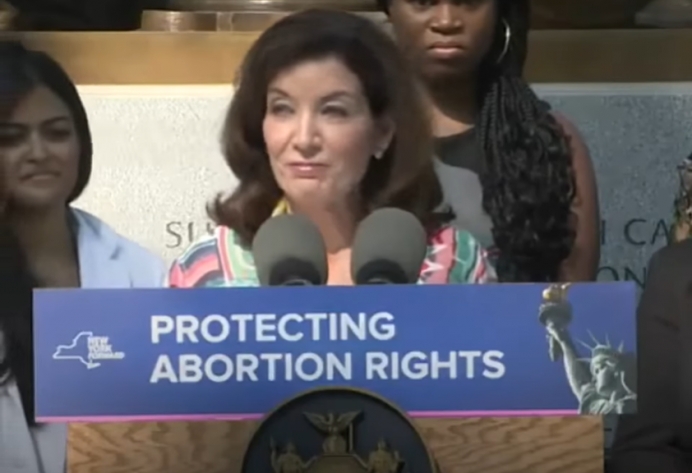 Hochul’s comments come shortly after her announcement on Sept. 13 that she would roll out a new aggressive agenda to maintain abortion in New York state

(CNA) New York Governor Kathy Hochul on Wednesday said that she will help Texas women come to her state for abortions.

A Texas law went into effect on Sept. 1 that prohibited most abortions after the detection of a fetal heartbeat, which can be as early as six weeks into pregnancy. It is enforced through private civil lawsuits.

Hochul — a Catholic who became governor on Aug. 24 following the resignation of Andrew Cuomo — on Thursday said that her state is reviewing options to help Texas women come to to New York for abortions.

“For women in Texas, they need to know: we will help you find a way to New York and we are right now looking intensely to find what resources we can bring to the table to help you have safe transport here and let you know there are providers who will assist you in this time of your need,” Hochul said in a Sept. 15 interview with MSNBC host Lawrence O’Donnell.

“You are not alone,” Hochul said to women in Texas. “Your sisters and brothers, enlightened brothers, in the state of New York will help you in any way we can.”

A spokesperson for Hochul’s office was not immediately available for comment on Thursday on whether public funds would be potentially used for transporting women from Texas to New York for abortions.

Hochul’s comments come shortly after her announcement on Sept. 13 that she would roll out a new aggressive agenda to maintain abortion in New York state.

Her administration plans to create a “Patient Bill of Rights” including information on abortion providers, legal rights, and “abortion care.” In addition, the state’s health department will consult with a group of “experts” from pro-abortion groups to create a “guidance document on the provision of abortion care in New York State.”

The state health department will also work to increase remote access to chemical abortions via telehealth.

“Abortion access is safe in New York - the rights of those who are seeking abortion services will always be protected here,” Hochul said. “To the women of Texas, I want to say I am with you. Lady Liberty is here to welcome you with open arms.”

Hochul also sent a letter to Facebook on Sept. 13 urging it to crack down on abortion “misinformation.”

She requested “information on any and all existing efforts to combat misinformation regarding abortion laws, procedures, and their ability,” and urged Facebook to “take additional action to curb the spread of this misinformation.”

“The truth is that abortion is a safe, common medical procedure,” Hochul’s letter stated. “One in four women will undergo an abortion in her lifetime. I am proud that New York is leading the fight to ensure that every woman and birthing person has access to abortion care.”

Hochul took over as governor of New York after the resignation of Andrew Cuomo, who was repeatedly accused of sexual harassment of current and former employees.

In 2019, Cuomo signed the Reproductive Health Act, that eliminated restrictions on abortion until the moment of birth in cases deemed necessary for the mother’s “life and health.” He ordered New York landmarks to be lit up in pink lights, the official color of Planned Parenthood, to mark the signing.

According to Hochul’s Sept. 13 announcement, the state health department will help clarify “the full scope of individual provider discretion under the Reproductive Health Act, and the definition of the term ‘commencement of pregnancy’ as it relates to abortion care.”