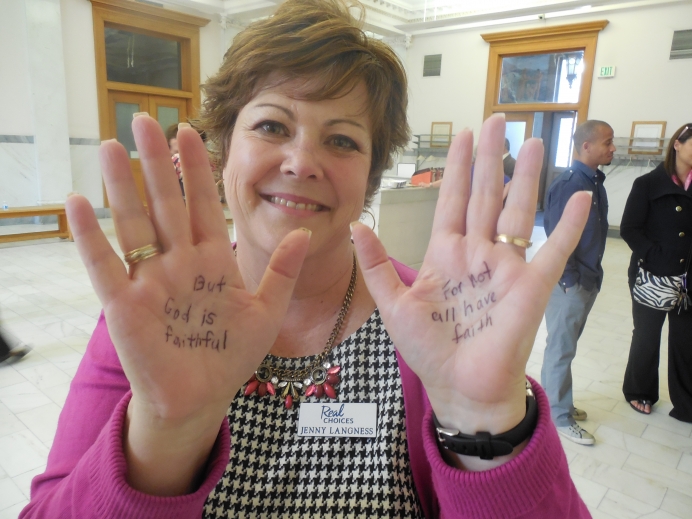 Jenny Langness was on hand for the resolution's adoption.

Jenny Langness walked into Tuesday morning’s session of the Colorado General Assembly Senate with a message written with a permanent marker on each hand.

On her left hand was written the words of 2 Thessalonians 3:2, “For not all have faith.” On her right, the words directly following, in verse 3, “But the Lord is faithful.”

Langness, who serves as Executive Director at Real Choices Pregnancy Care Center in Boulder, Colo., had the opportunity to see the truth of both statements on her way to celebrating her state’s adoption of a resolution supporting the work of pregnancy help organizations.

The bill, based on model legislation from Americans United for Life (AUL), was co-sponsored by the Chair and Co-Chair of the Health & Human Services Committee, Kevin Lundberg and Larry Crowder.

“The senators who supported us were very gracious,” Langness said. “They all made a point of coming over and thanking each one of us personally. In his closing remarks, Kevin Lundberg encouraged anybody who voted ‘No’ to go and visit a pregnancy center for themselves.”

The resolution’s adoption provides a refreshing change of pace in a contentious week, where bills in California and Illinois targeting pregnancy help organizations have made progress in their respective legislatures.

AUL’s model resolution has now been adopted in dozens of states, according the organization’s press release announcing the victory, which could strengthen the position of Colorado’s 90 pregnancy help organizations—according to Heartbeat International’s Worldwide Directory of Pregnancy Help.

“This is an awesome first step in sharing with the state the reality of what we do, and garnering that support in all of our communities,” Tamra Axworthy, Executive Director at A Caring Pregnancy Center in Pueblo, Colo., said. “Pro-life legislation hasn’t had a very good response in Colorado, but we have to start somewhere.

Tweet This: #prolife legislation hasn't had a good response in Colorado. We have to start somewhere." @ACPCPueblo

“If that ‘somewhere’ is just getting people to understand and realize that what we do has value and that the state supports the work of pregnancy centers, then I think that’s a good first step toward getting us to pass some actual pro-life legislation.”

The resolution passes on the eve of the introduction of a fetal homicide bill that has reached the State Senate floor in the wake of a lethal attack on Michelle Wilkins, whose 7-month-old child was cut out of her womb on a March 18 attack.

While the fetal homicide bill itself is being opposed by NARAL Pro-Choice Colorado, the resolution honoring locally funded, grassroots pregnancy help organizations also met with opposition prior to its passage Tuesday.

Irene Aguilar protested the resolution, calling for an amendment to include family planning clinics, according to Langness, who was present on the Senate floor with leaders from over 30 Colorado pregnancy help organizations.

“I haven’t seen a parenting class at Planned Parenthood before,” Langness said.

Tweet This: "I haven't seen a parenting class at Planned Parenthood before." @JennyLangness

Axworthy, whose pregnancy help organization serves within Sen. Crowder's district in Pueblo, thanked state lawmakers for their courage and boldness in standing behind their work.

"We're very glad to have people in our community who are willing to step up and get the ball rolling," she said.