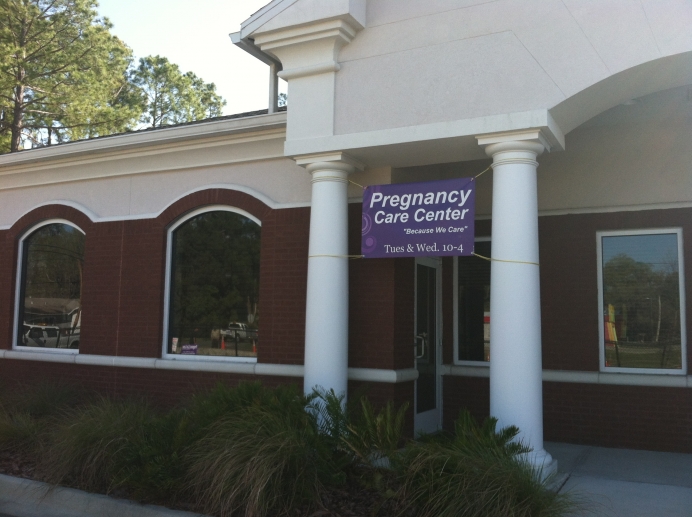 A new Pregnancy Care Center opened in the second most economic challenged area of Florida in February. Photo provided by Donna Sandage

When officials at Pregnancy Care Centers, which serves women and families in two locations in Florida, saw the need for a third location in the second-most economically challenged area in the state, they began a five-year plan to open the doors to location No. 3.

But the Lord had other plans, said Donna Sandage, executive director of Pregnancy Care Center, which has existing locations in Lake City and Live Oak communities. The Christian faith-based, donation-funded, nonprofit organization is dedicated to saving the lives of the unborn and empowering women and men to be informed parents.

“It’s really a cool story,” Sandage explained. “We had it in our vision and God had it in God’s timing to make it happen.”

Tweet This: "We had it in our vision and God had it in God's timing." @KBender_CNH

After identifying the goal of opening a care center in Hamilton County, the nearly 30-year-old organization set their sights on 2016 as a target. But a woman touched by the words and the work of the center had other plans.

The woman is a branch manager of First Federal Bank of Florida, a newer building on West Hatley Street in Jasper which has two suites attached to it, Sandage said. And she offered the Pregnancy Care Center the space in one vacant suite to expand.

“God just brought it together,” Sandage said. “The bank manager offered us the space, and she told us to look and see what we had in the budget for it. Really, we had nothing budgeted. I was almost ashamed to do it, but we emailed them and told them we could do $400. And they replied. ‘All inclusive, you can rent it for a year for $400.’”

The three-room suite is staffed two days a week by one full-time employee, client advocate Rhetha Mickler, and a volunteer. The new Jasper center offers free pregnancy tests, “Earn while you Learn” parenting classes that allow parents to earn credit for donated baby items for attending classes and counseling. Clients can receive ultrasounds at the two other locations.

Pregnancy Care Center opened its new center on Feb. 4, and they had their first client 30 minutes after they opened, Sandage said.

“They’ve been coming ever since,” she said. The new center has 10 distinct clients and 17 visits as of April 15.

“We’ve had people continually walking in and saying they’re glad that we’re there,” Mickler said. “It’s been a great blessing to see people who come in to find out what we do. It’s such a blessing to see these parents-to-be taking these classes. We’re hoping it’ll make a difference forever in their lives.”

Tweet This: The #Jasper location fits a need in a small, rural town. @KBender_CNH

Mickler said they had a couple come in and say they had an appointment, but they had thought they were in a different place.

“The man goes, ‘I’m confused, where are we?’ We showed them around and told them what we offer,” Mickler said. “And they said that’s just what they were wanting to do. God just brought them to us.”

Already looking ahead past the first year, Sandage said she hopes to continue to lease the space until they can expand to a location which will allow for ultrasounds, too.

“God had already placed the vision in us, and He saw the timing and helped us right through it,” Sandage said. “The goal is to grow enough to provide the medical side there, too.”

Long-term, Sandage said her goals are to help the community of Hamilton County see the truth about life and ultimately chose life. There is no abortion clinic in the county, so there are no specific stats available.

“We want to see better parents of those who chose life. If we change this generation, we’re going to change the next one,” Sandage said. We’ve had a lot of community support and a lot of other agencies are coming to see us and unite with us and make a difference.”

Is your pregnancy help organization expanding? Help us tell your story here.