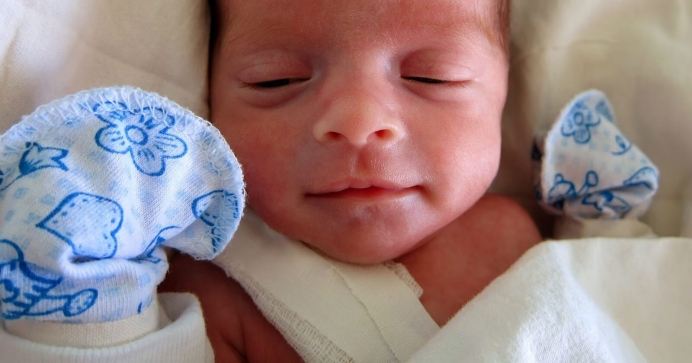 (Right to Life UK) A new study has found that premature babies appear to experience less pain during medical procedures when they are spoken to by their mothers. Premature babies often have to spend time away from their parents in neonatal intensive care units and may require multiple painful clinical procedures.

Dr. Manuela Filippa, of the University of Geneva—the study’s first author—explained that the new research may not only help the infants, but also the parents by showing them how they can play an important role while their baby is in intensive care.

She said: “We are trying to find non-pharmacological ways to lower the pain in these babies”, she said, adding that there was a growing body of evidence that parental contact with preterm babies could be important for a number of reasons, including attachment.

Dr. Filippa said the team focused on voice as it was not always possible for parents to hold their babies, and that voice could be a powerful way of communicating emotion.

Mothers’ voices were studied in particular as infants would already have heard it while in the womb. However, Filippa said that this did not mean a father’s voice would not become as familiar over time, and added that they are currently running a study on fathers’ vocal contacts.

Writing in peer-reviewed journal “Scientific Reports”, Filippa and researchers at the University of Geneva, Parini hospital in Italy and the University of Valle d’Aosta, reported how they monitored the pain responses of 20 premature babies in neonatal intensive care by carrying out a routine procedure in which the child’s foot is pricked and a few drops of blood are collected.

The team recorded three measures to gauge the level of pain experienced by each baby – their facial expressions, heartbeat, and oxygen levels. The facial expressions were subsequently examined by researchers unaware of which condition it was related to.

The results showed that the infants’ pain levels dropped from around 4.5 to 3 on a 21-point scale when their mothers spoke.

Filippa explained: “For this specific age, this is an important change”.

“Oxytocin is known to be involved in the attachment processes and in maternal sensitivity. It can also be protective against the effects of pain”, she went on.

Filippa also explained that pain reduction was less clear when mothers were singing, a finding which may reflect the “constraints of the structure, words, pitch and melody of songs and lullabies”.

One limitation of the study was the small number of babies involved. “Of course we need to have more preterm babies involved and also other measures, neurological measures, for pain perception”, said Filippa.

However, she added that the results were promising, explaining that: “The key message is that it is very important to involve parents in the early care of their preterm infants, also in difficult situations like painful procedures, using their voice… What we know now is that parents can do it and it is beneficial”.

Tweet This: It's important to involve parents in early care of their preterm infants, and in situations like painful procedures, using their voice.

Born before the abortion limit

It is becoming more and more common for babies born before the UK abortion limit to survive. In October 2018 for example, a severely premature baby was born in Scotland almost 2 weeks below the abortion limit. Sofia Viktoria Birina weighed only 500g, but by February last year she was healthy enough to be sent home with her parents.

Baby Sofia is not alone in being born so prematurely and going on to survive. A study, published in the Journal of the American Medical Association in October 2019, followed 2.56 million babies born in Sweden between 1973 and 1997, around six percent of whom were born prematurely.

Additionally, with each passing decade, the odds of survival for a premature baby to adulthood have improved from about 91% of babies born in the 1970s to about 96% of those born in the 1990s.

Right To Life UK spokesperson, Catherine Robinson, said: “Research, such as these recent studies, and advances in medical technology are improving the life-chances and quality of life for premature babies all the time. In particular, severely premature births pose a direct challenge to the abortion law in Britain, which permits abortion up to the 24th week of pregnancy”.