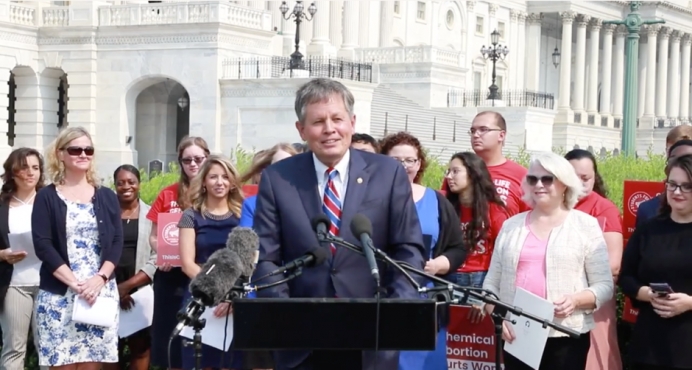 (CNA) Pro-life lawmakers introduced a bill Wednesday to defund public colleges and universities that perform abortions or offer the abortion pill to students or staff.

Sen. Steve Daines (R-Mont.), the founder and chairman of the Senate Pro-Life Caucus, on Wednesday introduced the Protecting Life on College Campus Act of 2021 in the Senate, while Reps. Chip Roy (R-Texas) and Mary Miller (R-Ill.) introduced a version of the bill in the House. The bills would stop federal funding of public colleges and universities that offer abortions or abortion pills at campus health clinics.

The lawmakers said the bill is a response to a new California law requiring campus health clinics at state colleges and universities to make abortion pills available to students on-campus starting in 2023.

Pro-life activists have criticized the California law, arguing that an estimated 7% of women who undergo a chemical abortion experience complications afterward which require surgery.

In remarks to reporters on Wednesday morning, Daines said that chemical abortions “are dangerous, and target vulnerable young women.”

“We can’t let our campus clinics become abortion clinics,” he said, adding that “the craziness in California” shouldn’t become “the mainstream in America.”

“What is on the fringe of a far-left position suddenly can become mainstream in this country and we’ve got to stop it,” he said.

Jeanne Mancini, the president of March for Life, told reporters that “access to abortion does not equate to women’s health.”

“This abortion regime is dangerous for women,” Mancini said, adding there are “psychological ramifications” to “being your own abortionist.”

Tweet This: “This abortion regime is dangerous for women” … there are “psychological ramifications” to “being your own abortionist” - Jeanne Mancini

In 2019 California Gov. Gavin Newsom (D) signed the bill into law requiring 34 state university campuses to provide free access to chemical abortions, as well as abortion counseling services. The law also set up a fund to pay for the cost of chemical abortions at the campus clinics, providing a $200,000 grant to each clinic.

The California Catholic Conference opposed the legislation as “unprecedented and unnecessary,” arguing that it would force state universities into “promoting, facilitating and potentially funding only abortions.” The law’s abortion counseling requirement was written in such a way as to exclude pro-life counseling, the conference added.

On Wednesday, Roy said his bill in the U.S. House “is the next logical step in our quest to protect life.” He noted that the legislation should coincide with a defense of the Hyde Amendment, which bars the use of federal funds for most elective abortions.

“Here today, we are united in standing up to ensure that taxpayer dollars don’t go to institutions, to states, carrying out the horrific practice of chemically induced abortions,” Roy said.