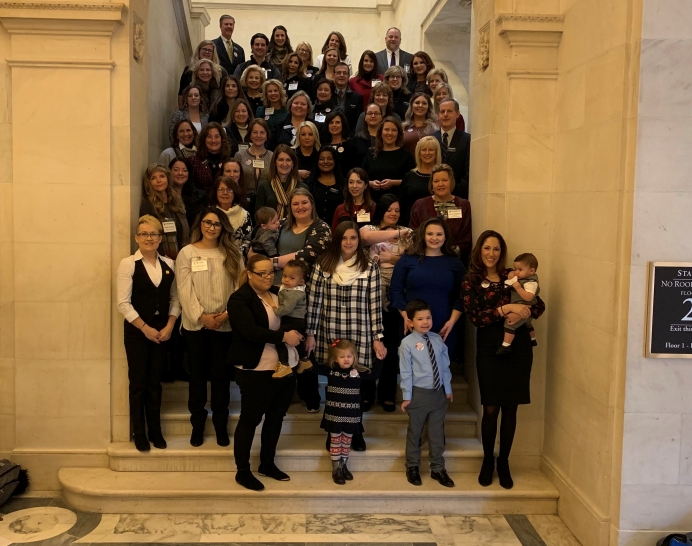 Moms and Babies Go to Congress, share how pregnancy help changed their lives

Six mothers and their precious children gave powerful witness to the gift of life on Capitol Hill this past week with Heartbeat International’s annual Babies Go to Congress campaign.

Heartbeat International has taken centers and clients from across the United States to Washington to meet with their representatives since 2009, making hundreds of office visits on Capitol Hill and representing dozens of pregnancy help centers.

Babies Go to Congress was welcomed in 2019 to a meeting with Vice President Mike Pence, and its participants also appeared with Teresa Tomeo on EWTN’s television coverage of the March for Life last year.

Rebekah Hagan of the San Diego area, and her son Zecheriah, were part of the Babies Go to Congress team.

Hagan took part in the Congressional briefing, sharing her story there, as Zecheriah, now six, was one of the first babies to be saved by APR.

“In a moment of panic and fear and just sheer crisis, I thought abortion looked a whole lot like help, and I thought there was no other way out of my situation than abortion,” Hagan said.

Hagan took the first pill in the two-pill chemical abortion process, but immediately regretted her decision and found help through a healthcare provider who administered the APR protocol, giving birth to Zecheriah in 2013.

She now works with a pregnancy center and performs outreach to raise awareness about APR.

“I’m just so grateful and honored to be a part of Babies Go to Congress,” she stated.

Tweet This: “I’m just so grateful and honored to be a part of Babies Go to Congress”

Mary and Dominic were helped by Hope in Northern Virginia pregnancy center in Falls Church.

“They helped me more than I could have imagined,” she said.

“Today we met some pretty important people,” Mary said about meeting with decision-makers in the Nation’s Capital for Babies Go to Congress. “It’s a memorable experience.”

Her message for other mothers facing an unplanned pregnancy?

Tweet This: “Be brave, you can do it” - Mom helped by a pregnancy center to other moms in unplanned pregnancies

Chelsea said she’d taken many home pregnancy tests when she found out she was expecting her daughter, because of being in disbelief. Chelsea then found Compassion Care Center.

“I ended up going there and it was the best decision I could have ever made,” she said.

Seeing her baby’s heartbeat on an ultrasound made available by the center changed everything, said Chelsea. She finished school and now helps other moms in her same situation at the center.

“We are just so grateful for everything Compassion Care Center has done for us,” she said.

Mackenzie was also part of the Babies Go to Congress team this year.

She said she knew she wouldn’t have help from her baby’s father when she became pregnant while 17 and in high school.

The pregnancy center took her in with open arms, said Mackenzie, helped her with material assistance, and with prenatal education classes she began to build a bond with her baby. Mackenzie still has a close relationship with staff who helped her at Pregnancy Help Center of Artesia, NM.

“So now I have a wonderful son,” she said. Her little boy turned four-years-old during Babies Go to Congress. Mackenzie would later become pregnant after having her son, and the center was there for her again.

“Because of the bond with my son, I did not hesitate about my options when I found out I was pregnant with my daughter, who’s three,” she said.

Autumn and Neveah were helped by The Cottage in Bartlesville, OK.

Autumn was in an abusive relationship, hiding the abuse, and at one point had to have surgery for an injury she sustained from the abuse. Her boss helped her find The Cottage, a maternity home, where she moved with her son, and was able to apply for and attend nursing school while living there.

The Cottage again assisted her with a subsequent pregnancy.

Autumn said if she hadn’t found The Cottage, she would never have gone to nursing school, and would not have her two healthy babies.

“I’m just beyond faithful for The Cottage,” said Autumn.

Brittni and Brantlee received assistance from the Reliance Center in Lewiston, ID, and the 12-week Embrace Grace program offered there. The Reliance Center also helped Brittni with things like her rent and electric bill.

She said she most likely wouldn’t have her son without the Reliance Center. Brantlee is 16 months old, and she is still so moved by the help she received from the center that it brings tears to her eyes.

Now Brittni has a full-time job, a part-time job, she attends school full-time, and is engaged to be married.

“Don’t be afraid to talk to somebody,” she stated, “because there are options for you.”

Tweet This: “Don’t be afraid to talk to somebody, because there are options for you” - Mom supported through a pregnancy help center

Moms, babies and their pregnancy center friends were able to do some sightseeing, take part in other pro-life events and joined Heartbeat International for the national March for Life.

For more information about Babies Go to Congress, Click HERE and HERE.