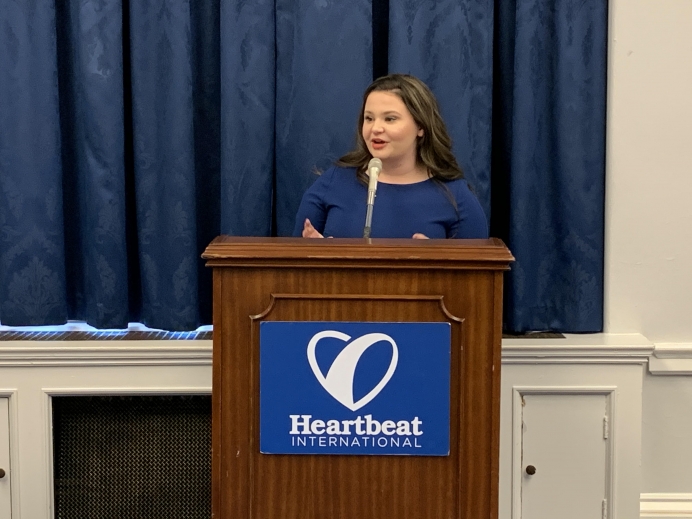 Congressional staffers representing a dozen-plus federal lawmakers received an education on Capitol Hill this week on a medical protocol that has helped save the lives of at least 1,000 unborn children after the babies’ moms changed their mind following the start of the chemical abortion process.

With Heartbeat’s Babies Go to Congress initiative, mothers who have been served by pregnancy help organizations, along with their children, visit with lawmakers on Capitol Hill to tell their stories and illustrate through personal experience that pregnancy centers are good for the country.

Christa Brown, Heartbeat’s Director of Medical Impact, told those attending the briefing that, “To date, nearly 1000 women have successfully stopped their abortions and saved their children through APRN—a hotline and network of physicians, operated by Heartbeat International, which is the world’s largest affiliation of pregnancy help organizations.”

Staffers for 13 members of Congress were on hand to learn specifics about chemical abortion and Abortion Pill Reversal. The abortion industry and its supporters have denigrated APR continually in the media, fought legislation that would ensure women seeking abortion are fully informed about the possibility of abortion pill reversal should they change their mind, and pro-abortion researchers have attempted to debunk the protocol via incomplete and inconclusive study results.

Brown explained how the first abortion drug mifepristone blocks the progesterone receptors in the pregnant woman’s uterus and placenta, and that progesterone is necessary to maintain a pregnancy.

“When this crucial hormone is blocked, the pregnancy is immediately destabilized and the life of the baby is at risk,” she said.

“The providers of chemical abortion have worked hard to create the illusion of a quick and easy solution to an unexpected pregnancy - an abortion that is “less invasive” and “more natural,” Brown said, “an abortion in the privacy of your own home.”

She then added, “This can be appealing until you are having an abortion in the privacy of your own home.

“We hear often from women how terrifying it can be when your own bedroom, dorm room, or bathroom essentially becomes an abortion facility,” she continued. “Women are often shocked by the pain and bleeding they must endure throughout the process as well as seeing and needing to dispose of their own children.”

Brown then quoted a woman who’d been through a chemical abortion.

The woman had stated:

“Nothing prepared me for what happened…it was the worst pain I have EVER felt in my life. And secondly, I SAW my baby. He…looked so human already. I had no idea that my baby was so big after only 2 months. Just because you can’t see or feel it inside you doesn’t mean it’s not alive.

Brown explained that the rates for complications resulting from chemical abortion are four times higher than for a surgical procedure.

“Serious complications of chemical abortion include “ruptured ectopic pregnancies, hemorrhage, infection, and retained pregnancy tissue, which require surgery in as many as one in twenty women,” said Brown.

“It can be the most difficult decision a woman will ever have to make,” she said. “The promise of an easy fix is enticing, and there are often times relational, and financial pressures that move the choice forward quickly.”

The interim time between when a woman takes the two abortion pills can be very stressful as she contemplates if she’s made the best decision, said Brown.

“Women often regret their abortions and often that regret sets in right away,” she told the Congress members’ staffers. “One of Abortion Pill Rescue’s main goals is to help ensure that women have the opportunity to choose life for their children every step of the way.

Brown also let them know the Abortion Pill Rescue Network is ready to assist women who have started the chemical abortion process to reverse the effects of the deadly chemicals in involved with the abortion pill.

“When a woman calls our hotline, we listen to her, answer her questions and explain what reversal is,” she said. The number of women seeking help continues to grow.” 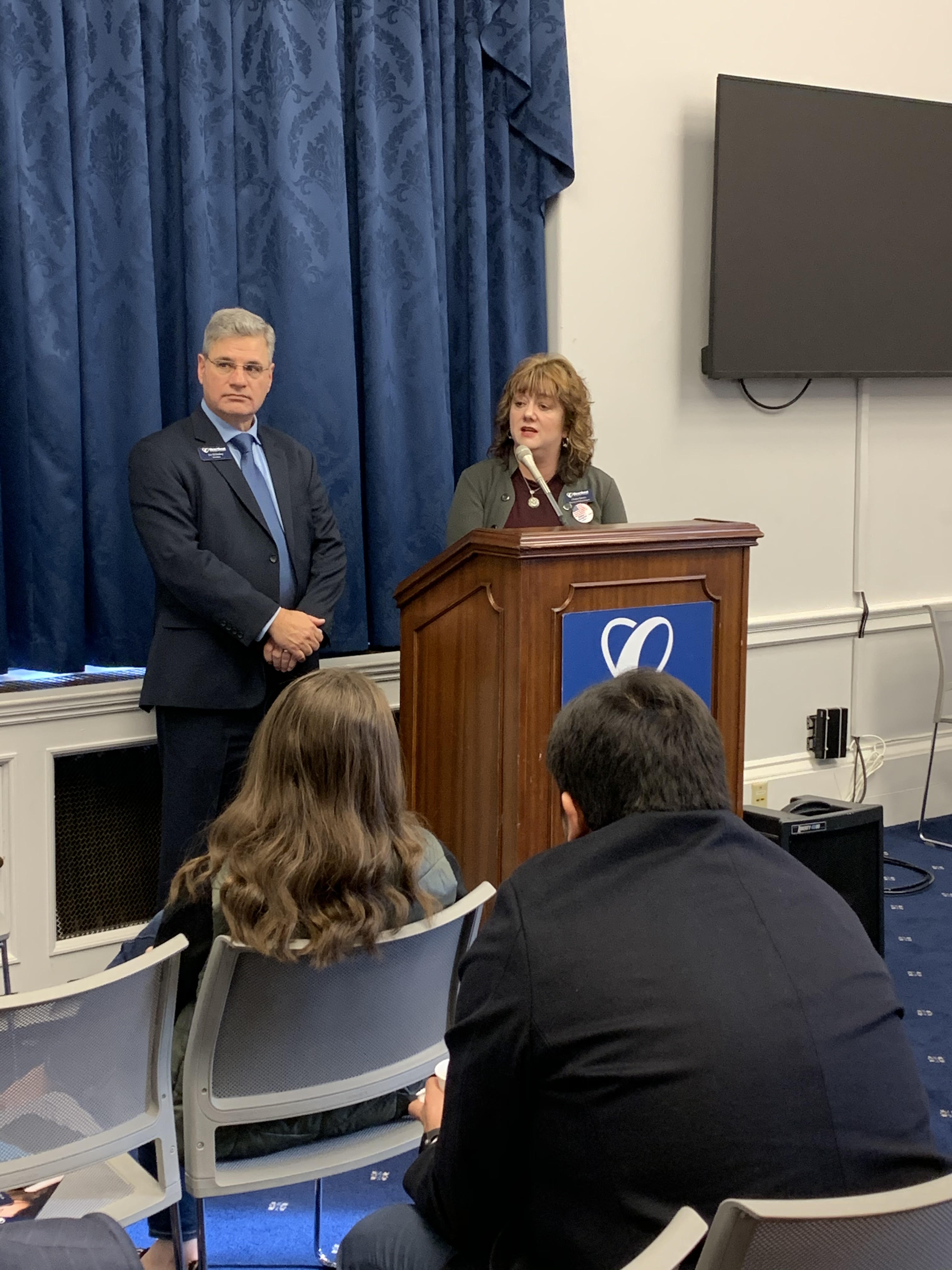 “Women deserve to know the truth,” said Brown, “they don’t give up that right when they seek an abortion.’

Reversal of chemical abortion is a safe and effective choice for women who have taken the first abortion medication and wish to continue their pregnancies, she told those in attendance.

“As we continue to see so many successful reversals, our babies are growing,” Brown said. “We see them reaching milestones, walking, talking, celebrating birthdays … some are already in school.”

Brown then introduced APR mom Rebekah Hagan, present with her son, six-year-old Zechariah. Rebekah was a mom who called the APR hotline back in 2013.

“We are thankful for her bravery and determination to make another choice after starting a chemical abortion,” said Brown. “She would like to share her remarkable story of having regret and receiving a miracle second chance to choose life for her precious son.”

Hagan was pregnant at 18 as a freshman in college, already the mother of a nine-month old baby she’d delivered in high school. She’d left a toxic relationship, to then learn she was again expecting with her partner.

“To say that it was an unexpected, unplanned pregnancy would just be an understatement,” said Hagan. “This was the most shocking, devastating news I could have possibly received.”

Threatened with the possibility of having to quit school and leave her parents’ home, Hagan thought there was no other possible choice than to end her pregnancy.

She went to an abortion facility and took the first pill in the chemical abortion regimen.

“When you’re operating out of fear of crisis, sometimes you don’t make the best choices,” said Hagan. “And I realized that this was not the best choice for me, and I so desperately wanted to take it back.”

“Thankfully I found the reversal network,” she said, talking on the phone to a nurse in the Abortion Pill Rescue Network who put her in touch with a local doctor who administered the APR protocol.

Hagan shared with those at Congressional briefing her experience with Abortion Pill Reversal, that it worked, and her son was born in October 2013.

She had her son, six-year-old Zecheriah join her at the podium for a moment to greet the lawmakers’ staff in the room, the little boy saying, “Hi.”

“And truly, Zecheriah’s life was not just saved by abortion pill reversal” she said. “But I really think that mine was too.”

Tweet This: “And truly, Zecheriah’s life was not just saved by abortion pill reversal. But I really think that mine was too” - Rebekah Hagan

Hagan recounted that she graduated from college in 2018 with both of her babies watching, and that, “Our life has just been better than I ever could have imagined.”

Hagan was one of six moms to take part in Heartbeat International’s Babies Go to Congress campaign.

Heartbeat staff took questions on APR specifics from lawmakers’ aids for some 30 minutes after the presentation.

Following the Babies Go to Congress visits on Capitol Hill Thursday, the moms and babies were slated to take part in the national March for Life along with hundreds of thousands of prolife supporters on Friday.