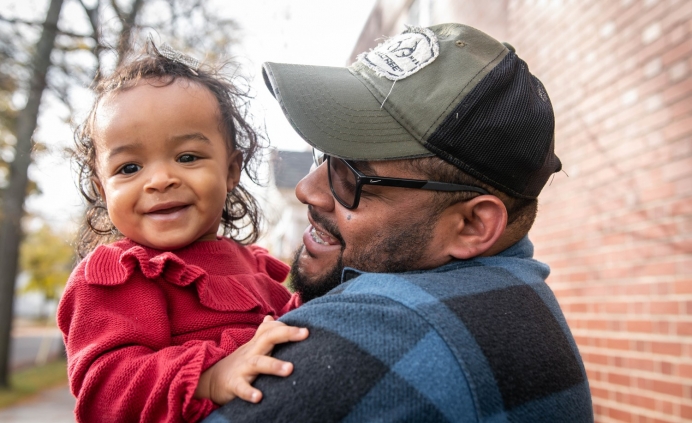 When a pregnancy center in Michigan was presented the opportunity to purchase a building next door, organizational leaders hesitated at first. Now, six years later, what once drew darkness shines a light of love and hope.

Alpha Grand Rapids acquired the property in 2015, and, according to the organization’s website, what has become the ministry’s Men’s Center “is the first standalone building in the United States that provides comprehensive services to fathers in need of education, material resources, and emotional support.”

What was old was made new, but the alteration didn’t happen overnight.

“It was quite sad to see the state of disrepair of that (old) building,” said Alpha Grand Rapids’ President Colleen Geisel.

Geisel said the city approached Alpha about purchasing the building, willing to sell it for $17,000.

“I told the city we didn’t have the money,” she recalled.

Providentially, two churches stepped in with a gift totaling the asking price between the two of them.

“We ended up tearing that old building down and began a major capital campaign,” Geisel said. “It was a very challenging process, but I’m thankful.”

This unique approach – a separate building for a men’s ministry amid a pregnancy resource organization – captured the attention of Heartbeat International Vice President of Ministry Services Betty McDowell when she visited Grand Rapids earlier this year.

“This is the first I’ve ever seen of a dedicated property with men in mind,” McDowell said. “They are in the right neighborhood to have an impact on their community. They are definitely a bright spot in an under-served community.”

The doors to the Alpha Men’s Center opened during the summer next to the existing Women’s Center. Both are now under the brand Alpha Grand Rapids.

The men’s center shares a parking lot with the women’s center. Similar programs are conducted at each location, including pregnancy options discussions and parenting classes. Each center also offers life-skills and GED classes, single parent support groups, materials assistance, and English as a second language classes.

In addition, staff and volunteers of the new men’s center have been conducting outreach and hosting activities, like a barbeque. A basketball court was also created, and men in the community are welcome to use it, Geisel said.

Basketball draws men together and the court has drawn community men to the new facility, she said.

“It’s fun to see,” said Geisel. “We want the young men in this area to know we exist, and we care about them as people.”

Reaching the men, impacting the women, and helping the community

A ribbon-cutting grand opening for the Men’s Center took place in May 2021; doors opened to clients in the next month.

Men play not only a large role in a child’s life but also in a woman’s decision whether to continue her pregnancy. However, Haviland said, “I don’t think a lot of dads realize how important of a role they play in a pregnancy.”

Tweet This: Men play not only a large role in a child’s life but also in a woman’s decision whether to continue her pregnancy.

The Men’s Center helps them in that understanding through options counseling and other discussions.

The facility and the ministry’s staff and volunteers have been effective since the building’s recent opening. About 50 different men participate in the various program offerings, and sometimes five or six new men a day show up, Haviland said. He’s also led a few guys into a relationship with Christ.

Additionally, an outreach through a community early childhood event gave Haviland and three volunteers the opportunity to tell people about the center.

“We were the only vendors with male representatives at that event,” he said.

The center serves “a diverse clientele,” Haviland said. Thirty to 40 percent are Hispanic, another 50 percent are split between Caucasians and African Americans, and other men come from African, Burmese, and East Asian heritage, he said.

This diversity still connects them.

“Men want to do life together, but we are just such wary individuals,” Haviland said. “We don’t exactly walk into a strange place and just open up. We’re trying to create a very healthy, safe, and open culture here in the building.”

The interior helps bridge connections and build rapport. A pool table was installed, high top tables and chairs set up, and the décor created with a masculine appeal.

“To me, it was so welcoming and so male-affirming,” said McDowell, who was given a tour during her visit.

“The interior is a gigantic man cave,” Haviland said.

The welcoming yet manly facility helps break the ice for those walking through the doors of the Men’s Center. Alpha is trying to break generational father-absence and childhood trauma, which most families in the area experience.

“There’s guys that want to be involved – they want to be great dads, but fatherlessness or dysfunctional parenting is so multi-generational,” Haviland said. “We’re two, three generations deep into poor role models.”

He and his team use materials from the National Fatherhood Initiative (NFI), including the Fathering in 15 program, he said. The knowledge garnered can help bring about positive change.

“If you have healthy men, you’ll have healthy sons and daughters,” said Haviland. “When fathers change, communities change.”

According to the NFI, when dads are absent, families suffer.

Alpha Grand Rapids has opportunity to influence those statistics in a positive way, McDowell said.

“They have an opportunity to draw in men who may be marginally involved (with the woman’s pregnancy) with something that’s just for him,” she said. “But they’re also reaching other men in the community as well. They are trying to take these men and move them forward.”

In a short amount of time, positive changes are happening.

Such results can positively impact families and communities.

“We envision a neighborhood where moms and dads are very involved in children’s lives – where there is a culture of life in this community,” said Geisel.

“There remains a culture of death, not just from abortion, but from addiction, drugs, gang violence,” she said. “We really believe that a culture of life can come from these two big, beautiful buildings in this neighborhood. I really see a transformed community.”