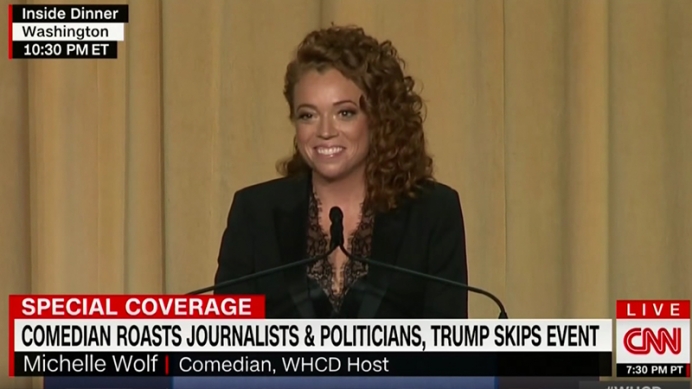 Michelle Wolf, Abortion, and Us

Until Sunday morning—just after the White House Correspondents Dinner—I had never heard of Michelle Wolf.

Ms. Wolf is, to some, a comedian. She’s worked with The Daily Show and apparently has a show of her own coming out (forgive me for not Googling the information). She’s entertained at Planned Parenthood events and is an unabashed abortion proponent. So be it.

On Saturday night at the Correspondents Dinner, she got in hot water for her personal attacks on White House Press Secretary Sarah Huckabee Sanders, but she also received blowback for the following, which was apparently her attempt at a joke:

“Mike Pence is also very anti-choice; he thinks abortion is murder. Which—first of all—don’t knock it until you try it. And when you do try it, really knock it. You know, you gotta get that baby out of there.”

Wolf continued. “And yeah, sure you can groan all you want. I know a lot of you are really anti-abortion, unless it’s the one you got for your secret mistress. It’s fun how values can waver.”

Again, Wolf thought this was funny. Even outgoing Planned Parenthood President Cecile Richards was uncomfortable, telling CNN, “This isn’t a topic I make jokes about . . .” while trying to defend Wolf with, “Well, I mean, she’s a comedian. That was her job.”

Those in the audience weren’t groaning because Wolf was taking a shot at them. Throughout the crowd were media, 90% or more of whom are proponents of abortion. They were groaning because even on a topic where they agree with Wolf, they knew she crossed a line.

Of course, some in attendance laughed and smiled, no doubt enamored with Wolf’s monologue. It’s amazing to me at what passes for comedy these days.

My first response to this was to think, “What would be a mic-dropping response to Michelle Wolf?”

Each day when I scan the web, I see headlines such as “(Fill in any name) destroyed in one tweet!” Or, “This response to (pick a name, any name) left me speechless!” I wanted one of those.

I desperately wanted to create one of those tweets or Facebook posts. After more than 17 years in front of audiences, maybe I’ve learned something about how to make a cool comeback. Certainly, with enough thought, I could craft a few sentences, creating a stir and making a point for “our side.”

Instead, what strikes me about all of this—and about Michelle Wolf--is that she is talented. Don’t get me wrong; most of her “jokes” on Saturday night were nothing but snarky, vicious attacks. But she can stand in front of an audience and command her listeners. On top of that, she is quick-witted.

Does she use these talents well? That’s another question.

Sadly, she fails to use her abilities to provide things such as hope, joy and—as any comedian should—laughter. We all need to laugh, and often. Laughter, they say, is good for the soul.

Before writing this, my ten-year-old son showed me something about good comedy. We had visited McDonald’s and I chose not to buy drinks and fries for me and the boys. Just sandwiches and chicken nuggets; because we were near our home where drinks were available, and they wanted chips anyway. Why bother with caffeine and fries?

Later in the evening, he approached me as I watched a hockey game. Referring to my McDonald’s decision, he had a message. “The family is unhappy with your performance,” he said, stone-faced. “You may have to be swapped out.” Perhaps it was my mood, or maybe his delivery. Whatever it was, I laughed as hard as I have in weeks. To me, this was comedy.

Abortion however, is never a joke. Most comedians understand certain subjects; such as the Holocaust, terrorist acts . . .  and abortion, don’t go into the act. They just don’t.

It’s a shame Ms. Wolf does not understand this. In response, some will attack her on Twitter, blow up Facebook with words of protest and threaten sponsors of her new show. There is something to be said for bringing this episode to light and if those who oppose her comments do so with civility, I get it. I’m writing about her comments, so it’s not for me to say we ought to sweep her words under the rug.

To me though, Wolf’s comments were more than something to protest; they were a reminder. We still have work to do.

Tweet This: Wolf’s comments are more than something to protest; they are a reminder. We still have work to do. #prolife @kirkwalden

Amidst the “jokes” and attacks, we’ve got to stay focused on our mission to reach those facing perhaps the biggest decision of their lives. As more choose life and abortion becomes unthinkable, one day—maybe soon—even the most “edgy” of entertainers won’t even dream of making light of such a serious subject.

And who knows? Perhaps in that day to come, Michelle Wolf will think differently, shifting her brand of comedy toward humor anyone can enjoy, and joining our chorus of those who celebrate life.

It would be great to have her on our team.