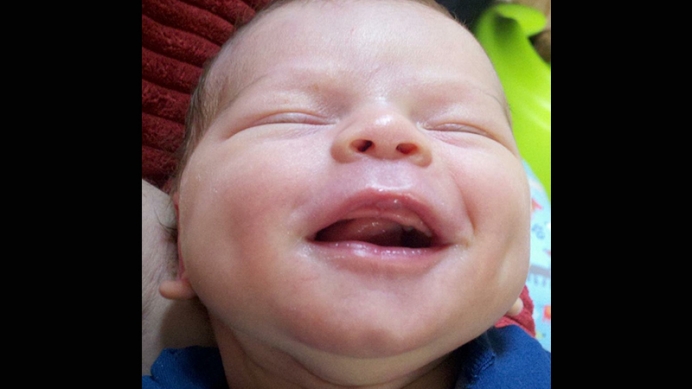 Susanne's grandson Reu reminds her of the sweet fellowship and communion which occurs between image-bearer and Creator long before a human being is born. Photo Courtesy: Amanda Maynes

How Gestation Includes Spiritual Growth (and Why That Matters)

Newborn Reuel was asleep on our bed, where his mommy had carefully swaddled him and laid him on his side. I lay down beside him to gaze at him and admire his perfection, as Nanas are prone to do.

Reu began to stir and make little grunting sounds. Then he quieted. His eyes gradually opened and focused on me, holding my gaze for a long moment. I sensed he was still asleep, though his eyes were open.

What happened next is difficult to describe. It was like the sunrise after a long night, or the best surprise ever.

Still looking right into my eyes, Reu’s expression blossomed into a radiant smile of pure joy and excitement. Eyes sparkling, cheeks dimpled, he lit up brighter than Christmas. His beaming look all but said the words,

Come and play with us!

I could see that my infant grandson was privy to secrets I have largely forgotten, enjoying an innocent pleasure and sheer delight in the presence of his Creator which mostly eludes me now.

Perhaps he was dancing with the angels, or playing hide and seek with the Lord Jesus. I’m not sure, but I laughed and cried all at once.

I longed to share more fully this joy experienced by the son of my son.

Jesus said, “Truly I tell you, unless you change and become like little children, you will never enter the kingdom of heaven.” (Matthew 18:3)

Newborn Reuel had no problem entering and enjoying that kingdom. He was accustomed to it. He’d already been experiencing it for the nine months prior to his birth.

As I beheld evidence of that heavenly interaction in Reu’s countenance, I caught a glimpse of the sweet fellowship and communion which occurs between image-bearer and Creator long before a human being is born.

Especially for those of us involved in the pro-life mission, this profound reality deserves our deepest reflection.

Time in the womb is an important slice of our human lives. Jesus himself only lived some thirty-three years, so his first nine months in utero represents a significant chunk of time when it comes to his earthly life.

Tweet This: Time in the womb is an important slice of our human lives. Here's how we spend it in communion with God. #prolife @susannemaynes

But here’s our challenge: Children in the womb are invisible. We don’t yet see their faces or hear their voices. We know they are there, but we can’t touch them or hold them in our arms.

Yet there’s much going on in the womb. There’s the intricate, complex physical knitting together of which Psalm 139 so eloquently speaks. There’s also an impartation of wisdom.

“Yet you desired faithfulness even in the womb; you taught me wisdom in that secret place.”  (Psalm 51:6)

While a boy or girl is growing in the womb, our Father is teaching him or her wisdom. Relationship is happening. Spiritual growth is going on.

God clearly forbids the destruction of His image-bearers and the interruption of this sacred process.

And this is why pregnancy centers exist.

Consider this for a moment: Every pregnant woman who comes into your center carries an image-bearer of God who is already being taught heavenly wisdom. Something marvelous is beginning – something we hope to nurture any way we can.

Of course, not every human parent walks in godly wisdom or imparts spiritual truth to their child—but that’s irrelevant.

It’s not our job to predict how well a life might be lived. It’s our job to protect every preborn life in light of the redemption possible in Christ.

Further on in Matthew 18, Jesus said, “See that you do not despise one of these little ones. For I tell you that their angels in heaven always see the face of my Father in heaven.” (Matthew 18:10)

Those of us involved in pro-life work refuse to despise, marginalize, or devalue children in the womb. We recognize they are human beings, children who belong to our Father, already communing with Him, personally watched over by His heavenly messengers.

Reuel turned six years old last week. When his great-grandfather passed recently, he prayed that everyone would “not be too sad, because God knows what’s going on and He knows the right time to die.”

My grandson is learning wisdom from his parents, who began speaking blessing over him when he was in the womb.

He also started gaining wisdom from his heavenly Father before he was ever born – just like every one of us.