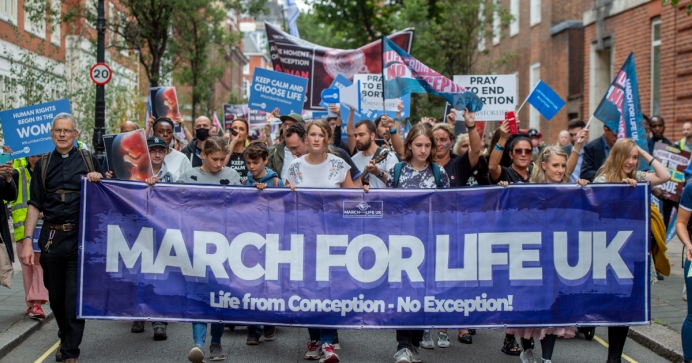 March for Life UK – A resurgence of life

(March for Life UK) It seems a long while since we’ve seen a large crowd of pro-lifers on the streets of London but on Saturday 4th-September, pro-lifers from around the UK were certainly making up for lost time. Many of those present mentioned that it felt like something of a rebirth for public witness in the pro-life movement, or a resurgence of life. Maybe this was because the crowd seemed dominated by young people. Over the last few years the numbers of young people attending March for Life UK have been increasing and this year was the most encouraging yet.

Tweet This: Pro-lifers from around the UK were part of a resurgence of life on Sept 4 as they took to the streets of London for the March for Life UK

In the morning the indoor venue for the pro-life festival, The Emmanuel Centre, was buzzing with young life as students flocked around the many pro-life stalls showcasing the work of pro-life organisations around the UK. Children of all ages from the smallest tots to teenagers joined in sessions of games, quizzes and talks that provided them with a chance to learn about the precious gift of life in an age-appropriate way. The auditorium filled up as more and more people hurried in to be part of the live audience for the pro-life quiz show where teams tried to guess what the general public knew about abortion (won by the pro-life pastor team who narrowly beat the pro-life students and claimed it was evidence of how in touch they were with the public).

The morning session ended with testimonies from various speakers including Barbara, a mum who 16 years ago considered abortion but thanks to help from ‘The Good Counsel Network’, chose life for her son who now stood beside her as a handsome 16 year old and was described by his brave mother as ‘the best thing that ever happened to me’. As Barbara finished sharing her story the young man moved to the microphone to simply say ‘My mum is the greatest and I’m happy to be here’.

Another positive story was shared by Sophie who had also once booked herself for an abortion. It was thanks to the joyful crowd at March for Life, who she happened to see in the city on a previous year, that Sophie decided to choose life nearly 6 years ago. Sophie had brought along her young son Riley, once scheduled to be aborted, and reminded the supporters that it could be their banner or poster that is seen this year by someone struggling in a

crisis pregnancy. ‘There are so many people here who have helped me and my family’ said Sophie, ‘it might be tough but there is hope’.

The audience were then roused by two speakers who were both post-abortive, Amy and Adam. Amy, conceived a child through rape and was then pressured to abort leaving her feeling ‘angry and betrayed’. Amy described how ‘when someone is in a crisis pregnancy it’s like being in the centre of a tornado. That’s why we need to share our message very loud and clear so that those people can hear it!’. She ended by reminding the crowd of the impact abortion can have on women who have conceived through rape. ‘Abortion does not heal rape’ she explained ‘it compounds it’. Adam encouraged the men present to not be afraid to speak up. Letting them know this was something he had once failed to do for his own child leading to his or her abortion. ‘It was men who introduced abortion from a predominantly male parliament’ he said as he prompted the men listening, ‘so don’t be put off by the pro-abortion narrative.’

The pro-lifers then filled the road outside and with banners, flags and home-made posters as they made their way through the busy streets of London accompanied by a very efficient police escort. Traffic had been stopped along some of the route as they moved past Trafalgar Square. Many of the passengers in the cars waiting, far from seeming annoyed at being held up, joined in with the happy mood of the crowd who sang and played music as they marched. Many of the general public could be seen themselves singing along and waved encouragement to the marchers.

A small group of around 20 abortion-supporters stood on the edge of Parliament Square, the final destination for the march, but came across as being a group of hurt and angry individuals who appeared alarmed at the size of the crowd who opposed abortion.

Tweet This: There was a seeming rebirth for public witness in the UK pro-life movement with a large crowd of pro-lifers at the Sept 4 March for Life UK

Live music could be heard playing from the pro-lifers’ stage which was set up in the square and then the final speeches began. ‘As a young woman, Natalia, came up on the stage someone nearby was heard to whisper: ‘London has gone silent’, and indeed, it did seem like that as not a sound was heard from the pro-lifers, the abortion supporters or even the general public. An emotional voice was heard telling the tale of the physical and emotional pain surrounding a DIY/home abortion and the haunting memories it leaves behind. ‘I killed my baby in the “comfort” of my own home’ recounted Natalia through tears ‘Can someone please explain to me how that was comfortable?’ Natalia also spoke of the dangers of home abortion ‘There are people receiving these pills with no face-to-face assessment and no scan’ she stated ‘how is this safe?’

Following stirring speeches from an evangelical pastor, Ebow Essel and March for Life UK co-director, Isabel Vaughan-Spruce, the last words of the day were left to Bishop Paul Swarbrick of Lancaster. He warmed to the crowd, or maybe it would be more correct to say that they warmed to the bishop and were told of a saying he learnt while serving on the African missions, the saying meant ‘the river is filled with little drops of rain’. Bishop Paul then called for prayer and the crowd that packed Parliament Square fell to their knees. As I looked over the thousands of heads bowed in prayer, I couldn’t help but think if the pro-lifers were meant to represent the drops of rain then it seemed fair to say that the river is clearly growing in strength and is a force to be reckoned with.