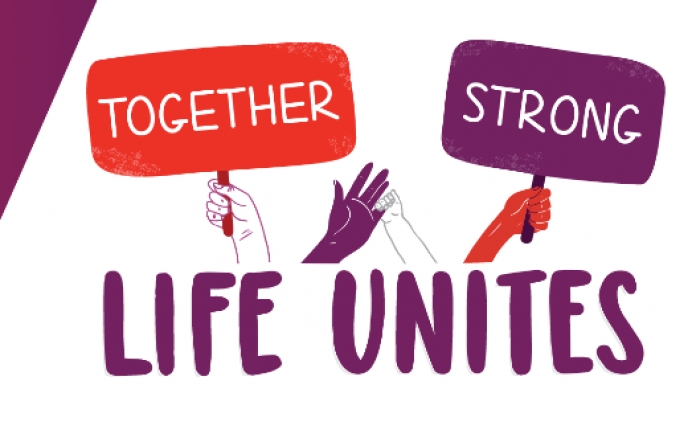 The 2021 March for Life theme was revealed this week during a live virtual launch with more than two dozen pro-life leaders and others taking part.

The theme for this coming year is “Together Strong: Life Unites.”

The March theme is chosen each year to convey a timely message. Given the current division, unrest, and fear, the 2021 theme speaks to the need to come together and be reminded of the pro-life mission and the strength found in truth, March for Life President Jeanne Mancini said.

“Though each of us brings our talents to the life movement, we are far stronger together,” Mancini wrote in a column for the Washington Examiner. “And so, our 2021 theme is, “Together Strong: Life Unites.”

Thousands of pro-life supporters tuned in Thursday night for the live virtual theme reveal, which was co-hosted by speaker, author and former 40 Days for Life CEO David Bereit.

Everyone has “a critical and irreplaceable role to play” in building a culture of life, Mancini said.

“From choosing adoption to joyfully accepting the responsibilities of fatherhood and motherhood, from sidewalk counseling to lobbying, from prenatal care to post-abortion support, from praying for the most vulnerable to voting to protect them, everyone is desperately needed,” said Mancini. “Our gifts and talents, united in the service of one common mission, make us strong.”

Though the 2021 theme gives a platform to show how supporting life is unifying, it also exposes “the divisive and disintegrating reality of abortion,” she continued.

“Abortion divides a mother from her child,” Mancini said. “The abortion industry has deceived many women into believing that pregnancy is a disease, motherhood means giving up one's dreams, and abortion is empowering.”

Tweet This: “The abortion industry has deceived many women into believing that pregnancy is a disease ... and abortion is empowering.”

She went on to detail how abortion divides women from the support and love they need, how it divides a man from his fatherhood and also divides siblings.

“The abortion industry even divides us from reality itself when it denies the scientific fact that human life begins at fertilization,” said Mancini.

The March for Life is the largest annual gathering of pro-life supporters in the world, drawing hundreds of thousands of people to Washington D.C. each year for the March and several days of coinciding events.

The 2020 March was historic in that President Donald Trump attended the pre-March rally in person to address the pro-life crowd.

The previous year pro-life teen Nicholas Sandmann and fellow students attending the March from Covington Catholic High School were accosted after the event by a group of Black Hebrew Israelites, with Sandmann then harried by Native American activist Nathan Phillips in the now infamous encounter near the Lincoln Memorial.

Sandmann was maligned in the press based upon edited footage of the incident, resulting in him and his family becoming the target of intense vitriol and death threats. Sandmann has since settled lawsuits with CNN and the Washington Post over their coverage, while other suits are pending. He was among the speakers at the recent Republican National Convention, emphasizing the importance of freedom of speech and standing up to the cancel culture and media bias, his message rallying pro-life supporters.