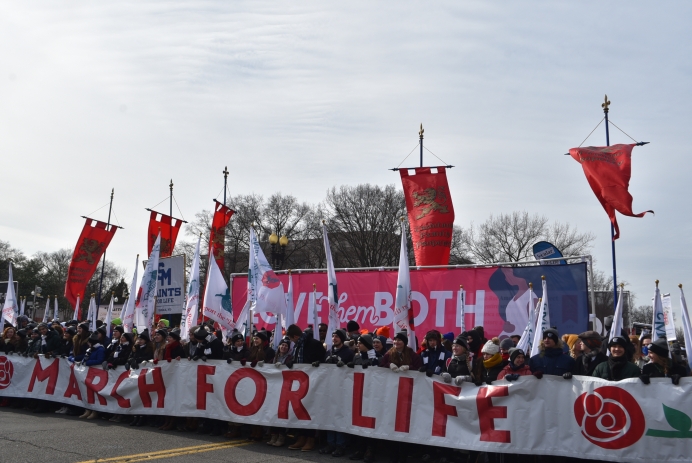 The 2022 March for Life in Washington D.C. Lisa Bourne

With its 2023 theme the national March for Life seeks to put clarity into existing confusion over the dignity of the unborn and life after Roe v. Wade, the March’s president announced Thursday - in particular, the lie that abortion is good for women.

The first March for Life after the Supreme Court Dobbs decision will be a momentous occasion, Jeanne Mancini said as she revealed the 2023 theme.

In announcing the theme, the March for Life would celebrate the overturn of Roe v. Wade with the Dobbs v. Jackson Women’s Health ruling, Mancini said. And it will honor those in the pro-life movement who have gone before, in particular founder Nellie Gray, on whose Jun 24 birthday, she noted, the final Dobbs decision was released. It would present a strategic plan for moving forward in the next phase of building a culture of life as well.

“I think we can all agree that this year it is particularly exciting year,” Mancini said.

The work for life is far from finished, she said, and the need to advocate for federal pro-life policies still exists.

Tweet This: The next phase of building a culture of life in the U.S. involves advocacy at both the state and federal level, the March for Life says.

And importantly, Mancini said that pro-life advocates must continue to support pregnancy resource centers and maternity homes that provide love, compassion, and resources to women, children, and families.

“We must continue to increase the safety net for moms,” she said.

Mancini said that two common questions she hears are whether there is still a need to march and if the March should continue to take place on the anniversary of Roe v. Wade now that it has been struck down.

While this is a moment of change in the culture, she said, it remains crucial to march and to do so commemorating Roe.

“Critical to our strategic plan is continuing to boldly march in Washington D.C. every January,” Mancini said.

However, now the March will not end at the Supreme Court.

“We will now be marching to the Capitol,” she said.

“It doesn’t end there,” said Mancini. “We must also march to our state capitols.”

The March for Life has had a state march initiative over the last five years and Mancini said the goal was to have a march in all U.S. states in the coming years.

Regarding the question of marching on the anniversary of Roe, she explained that moving the event to mark a particular Supreme Court decision would leave it open to complications should, heaven forbid, another decision affect things negatively. And further, with events as historic as the 1973 Roe decision, it is appropriate to continue to mark them as is done with other events, an example being D-Day.

Roberts offered a current overview of the pro-life cause and discussion on how best to approach the next steps in pro-life activism.

Keller spoke of why it is important for the pro-life movement to remain engaged in pro-abortion blue states.

Duane debunked the numerous medical myths and misinformation propagated by the abortion lobby since Dobbs.

Mancini announced as well that former NFL player and coach, and pro-life advocate Tony Dungy would be among the speakers at the March for Life Rally. Popular Christian band We Are Messengers would perform once again at the pre-rally concert.

And The Chosen actor Jonathan Roumie will keynote the 2023 March for Life Rose Dinner Gala.

“Yes, there is still so much work to be done,” Mancini said, “but we are encouraged by the fruits of our labors so far.”

She expressed gratitude for the dedication and passion that the many marchers have shown throughout the years.

And because of this commitment and enthusiasm, she said, “We are emboldened to take these next steps in carrying out our mission to promote the beauty and dignity of every human life by working for an end to abortion.”