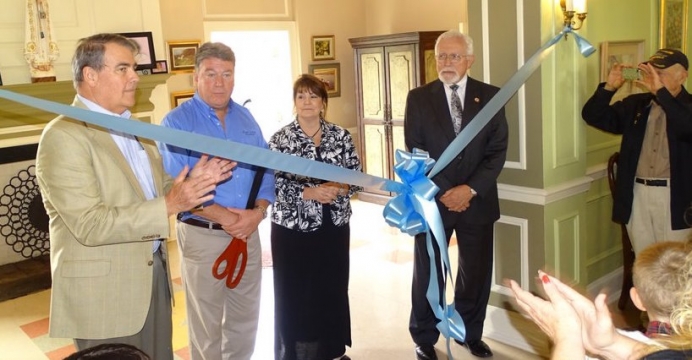 Randy and Evelyn James open up their regional center, which can house up to 30 women and children. Photo Courtesy: Paul Stefan Foundation

When Randy James and his wife, Evelyn, found out they were pregnant with their sixth child, they were thrilled. Their joy at the news was quickly replaced by fear when the first sonogram showed their son suffered from a diaphragmatic hernia—a condition that impedes the growth of the baby’s lungs.

After being sent to four different specialists in Washington D.C., the couple was given the heartbreaking news that there was no hope whatsoever of their son surviving birth.

“The doctor told us that the baby was incompatible to life,” Randy James said. “They recommended late-term abortion.”

The doctor advised them to travel to Kansas for a late-term abortion. As the couple left the office and headed back home to Locust Grove, Va., midway between Washington, D.C. and Richmond, they put aside their grief and vowed that no matter what happened in the life of their son, they would join the fight to stop abortion.

“We got to take pictures with him and forever we have a picture of my baby boy,” James said.

As Randy held his son in his arms, he realized those precious moments had almost been stolen from him by abortive doctors.

“They were stealing our joy from holding him and kissing him,” James said.

Although he survived less than an hour after his birth, the ripple effects of Paul Stefan’s short time on earth continue over a decade later. At his son’s funeral, James was approached by a woman from their parish who was praying for a home for unwed mothers. Both James and his wife felt this was the unmistakable calling of the Lord.

After Fr. Starzynski mentioned the idea during a homily, a local company decided to lease two homes for the ministry for a dollar per year. Another parishioner also donated $100,000 for renovations.

Tweet This: "They were stealing our joy from holding him and kissing him." #abortion #prolife #pregnancyhelp

James, a builder and developer by trade, personally oversaw the renovations.

“We called it Paul Stefan foundation after Paul,” James said. “The death of a baby was the birth of a foundation.”

From the beginning it was clear God had His hand in the matter.

“From the day Paul died to the opening of the first house was just over nine months,” James said. “The first mother to stay at the home gave birth to her child a year to the day Paul was born.”

In the ten years since the loss of their son and the birth of the foundation, the James family has seen 170 women and their babies come through the Paul Stefan homes.

However, their next venture might prove to be the most exciting yet; a regional housing and maternity center repurposed from an old hotel James recently purchased.

“We can have up to 30 women and children,” James said. “We are going to partner with four local colleges and are going to educate them so they can get an IT certificate. We want them off the welfare system so they can have their dignity back and go out and be productive and feel good about raising their children.”

Although he faced many critics in the process, James said he waited on God to open the regional center.

After purchasing the property, the next hurdle was to begin renovations. Deciding to involve the local community in the process, James went to local churches, small groups and even the Chambers of Commerce to ask for volunteers who would be willing to decorate a room.

“Each room is individual to the people that decorated it,” James said. “Each bedroom is unique.”

The ground floor of the regional center will be allocated as a soup kitchen for the community as well as an educational center for the mothers. The second floor will house women and children, and the top floor will be for pregnant women.

Though the regional center may look like a broader ministry, their vision remains the same.

“It’s not a shelter, it’s a program,” James said. “You want to get your life on track, get a safety net and have goals in your life; we’ll help you get there.”

The stories of changed lives are a constant motivation to stay on the path on which God has placed them.

“One girl came here who was actually on the abortion table,” James said. “For some reason, they couldn’t get her blood pressure right so they sent her home. She came back again but they messed up the paperwork and sent her home again. In the meantime she met someone who gave her our number.

“She came here and had the baby. One day she came into my wife’s office sobbing and holding the baby saying, ‘I love her so much and I was going to kill her!’ She realized what she could have done. And that’s the biggest success story right there.”

While hoping to open the top floor of the regional center in August, James is already looking at opening similar centers across the country. The legacy of his baby boy—born without lungs—lives on, breathing hope and life into new communities.