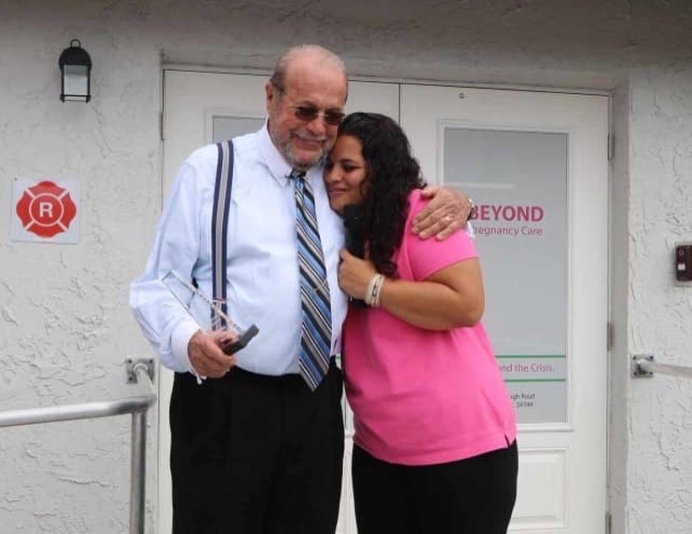 More than four years ago, Ivette Rodriguez dreamed of opening a pregnancy resource center in her Florida community. After sharing her vision with William Kenna, pastor of Faith Harvest Ministries in Kissimmee, her dream became a reality.

Earlier this year, Beyond Pregnancy Care dedicated its building to Pastor Kenna, who died after contracting COVID in October 2020. Kenna had been instrumental in the pregnancy help center finding its brick-and-mortar home and his church paid for the renovations necessary to turn the home into a pregnancy help center.

The dedication took place on Sanctity of Human Life Sunday.

“Pastor Kenna was my spiritual Dad,” Rodriguez said. “He’s the pastor who gave me the center building,”

“He was already battling cancer (but) he was … doing well,” she said. “He went into the hospital for a treatment, and he ended up catching COVID. That was such a devastating blow for us – we were not at all expecting to lose him.”

More than 60 people attended the dedication, Rodriguez added. A plaque adorns a wall of the home he gifted as a pregnancy resource center with his words about Beyond Pregnancy Care: “Through this pregnancy center, a prophet will be born.”

Filling in the gap

Because of Pastor Kenna and many others who helped, Beyond Pregnancy Care opened its doors in 2019.

The center remained open during the 2020 surge of the coronavirus. Some days only three volunteers came to work, but “we stayed open,” said Rodriguez, who in addition to founding the center, serves as director of Operations. She and the rest of volunteer crew even conducted “drive-through” services, providing diapers, baby food, and formula.

“There was such a desperation,” Rodriguez said. “People who had jobs and were well-off were coming to us, many of them crying, because they had lost their jobs.”

Grocery store shelves became bare, and so the need was great. Beyond Pregnancy Care helped fill the gap.

The pregnancy resource center did close for a time after Pastor Kenna’s death.

“It was so shocking for us,” Rodriguez said. “This was the man who invested in me. God carried me through losing him.”

Since opening the doors of this family-style home for pregnancy care services, Beyond Pregnancy Care has grown tremendously, according to Rodriguez.

“We’re seeing so many clients! It’s been super busy, every day,” she said.

Two years ago, the center averaged six clients a day. Recently, that number has more than doubled.

“I’m big about quality service, not necessarily quantity,” Rodriguez said. “I care about investing in these families, really making a difference, seeing growth and change in them.”

Tweet This: “I care about investing in these families, really making a difference, seeing growth and change in them” - Pregnancy help director

Recently, 15 people were served in one day.

“We still give good, quality service,” she said. “I really want these families to feel like families – that’s why we have a house, a home atmosphere.”

Rodriguez, who said she has a passion for interior design, describes the house as “bright” with “a lot of feminine touches.” There are two client advocate rooms, one which doubles as an ultrasound room; a prayer room; a reception and lobby area; a kids’ play area; and a baby boutique.

“Clients say they are surprised as to how much we’ve invested into the center to make it so beautiful. Even abortion-minded clients are overwhelmed,” Rodriguez said.

The outdoor space is also special, for it too provides a touch from Pastor Kenna in the form of a memorial garden.

“It was given to us by one of Pastor Kenna’s minister friends who owns a landscaping business,” Rodriguez said.

The garden is dedicated to people who “have lost a baby through abortion, miscarriage, or stillborn,” she said.

To further its outreach, Beyond Pregnancy Care has partnered with local businesses that provide medical care, including ultrasounds.

On Tuesdays, a midwife brings her bus and parks it behind the center. She offers prenatal and postpartum care and well-woman care.

Additionally, on Wednesdays and Thursdays, a local ultrasound company comes to the center to provide clients with ultrasounds. Rodriguez said she had a difficult time finding volunteer ultrasound technicians until a woman who owns a local business stepped in to provide that service.

Staffing has been the greatest challenge, she added. No one who serves at Beyond Pregnancy Care is paid - including Rodriguez.

“That’s our biggest hinderance, not having paid staff,” she said.

To answer that challenge, she, and the center’s executive director, Amy Van Riper, have created a year-long fundraising campaign called “Love Life Every Day.” They are looking for 365 donors, one for each day, who will give $40 a month.

“That will take care of all of our expenses, like insurance, utilities, and all that stuff to run the center,” Rodriguez said.

Such an amount would also provide a small salary for five people.

“That would be life-changing for us!” she said. “People need to take care of their families.”

In addition to the growth in client numbers, the center has also experienced expansion of their services. Currently, Beyond Pregnancy Care offers a fatherhood program.

“We call it ‘Go Beyond.’ We speak it into existence, like ‘Go Beyond – Don’t Get Stuck,’” Rodriguez said.

However, she wants to expand to a mentoring program.

She learned about a missionary in the United Kingdom who offers a program called Epic Dad. Rodriguez plans to launch that program at Beyond Pregnancy Care in June, coinciding with Father’s Day.

“We’re going to call it ‘Epic Dads at Beyond,’” she said.

Male volunteers from local churches are needed to begin the training.

“We want men to volunteer from any church they go to because they will be the bridge to their church. Any men willing to be a mentor is welcome to take the training,” she said.

Despite the staffing and funding challenges, Rodriguez’s vision for growth doesn’t end this summer. STD testing is another program planned for later this year, and she envisions opening additional pregnancy centers in the Kissimmee area as well as one in Puerto Rico. She would also like to open “at least one” maternity home.

Although Pastor Kenna has passed away, Rodriguez still has many people surrounding her to move her forward and to speak life into her vision for growth. That includes Van Riper.

“She has been with me from the beginning, and she is my right-hand person,” Rodriguez said. “I am so grateful for her! She’s indescribable. She is dedicated and focused – she does everything with excellence.”

Rodriguez, who became a single mom at age 15, is determined that Beyond Pregnancy Care will be a center that serves with excellence, from programs to the baby boutique.

“We want to show them (clients) that God gives them the best,” she said. “We spend time with clients, really listening to them, and sharing God’s love with them... Everything (done) is a representation of God.”