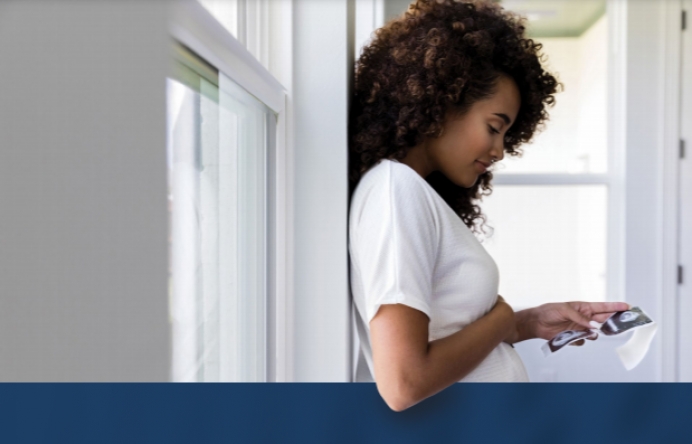 Recently, Heartbeat International released Life Trends 2020 Report, indicators of the trends in the pro-life and abortion worlds. Several statistics stand out in this new document, primarily in the areas of the abortion pill.

Increase in chemical abortions and percentage of APR starts

Where just a year ago RU486 made up nearly 40 percent of abortions, last year’s COVID-19 pandemic appeared to create a significant increase in that type of abortion. According to the Life Trends 2020 Report, last year nearly half of abortions were chemical.

The United Kingdom allowed for abortion pills by mail, often referred to as “Pills by Post.” Additionally, websites cropped up that directed women to order the drugs online, a measure considered illegal in the United States; however, earlier this year, the Biden Administration relaxed such rules and safeguards. Also, Planned Parenthood and Gynuity Health Projects received the green light in 2016 to conduct a ‘study’ of telehealth abortion in 17 states, including Montana, Colorado, Virginia, Washington DC, Washington state, and Oregon. Therefore, it follows that more abortions are done by chemical means, using the oral drugs mifepristone and misoprostol. 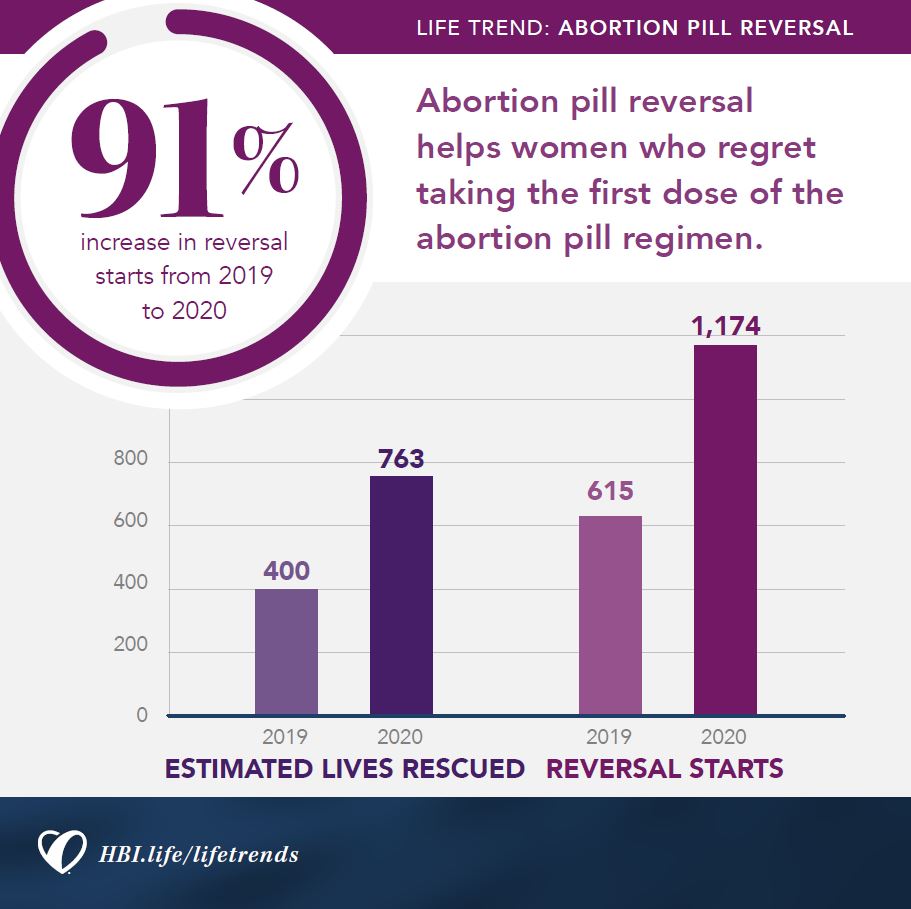 In a possible correlation, statistics in the Life Trends 2020 report show a huge increase in the percentage of abortion pill reversal starts during 2020, from 615 in 2019 to more than 1,170 last year, which represents a 91 percent increase from 2019 to 2020. A reversal ‘start’ means a woman receives a referral to a medical provider, and that health care provider determines she is a candidate for the reversal, and the woman has received a prescription for progesterone. The number of unborn lives rescued through the reversal protocol in 2019 was 400; in 2020, the number climbed to 763, according to the report.

Additionally, more than 1,000 medical professionals are part of Heartbeat’s Abortion Pill Rescue Network® (APRN), an increase from 750 in 2019. The report says that women from all 50 states in the U.S. and 46 countries contacted the APRN during 2020.

“Chemical abortion has made such a dramatic impact on what we’re doing,” McDowell said. “Because of the increase in chemical abortions, that has put Heartbeat in a place where we need to respond so that we’re reaching that particular client who is contacting us and then also equipping the pregnancy help community with the knowledge, the understanding, and building that network so that we have places to connect that particular woman. I think that’s been the most dramatic change.”

“The number of chemical abortions being over 50 percent really surprised me,” said Kirk Walden, who has been part of the pregnancy help community for more than 30 years, including seven years as an advancement specialist for Heartbeat International.

“That shocked me,” Walden said, “but it’s also amazing to see that we have an answer for that. Our challenge now is (to see) that there’s not a woman out there who goes for a chemical abortion who doesn’t know about reversal and abortion pill rescue. We’ve got to make sure every center in America knows about this and has a way of connecting a client to reversal. God has put this in our lap (and) that’s not optional for us anymore.” 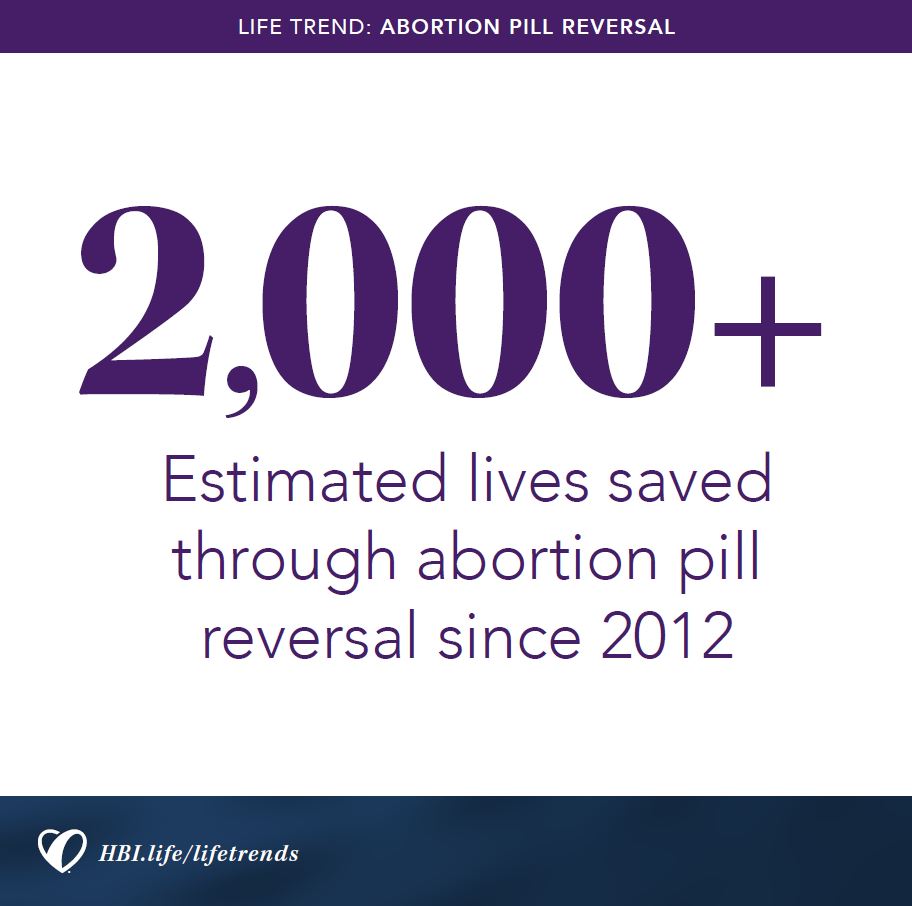 Tweet This: Our challenge is to see that there’s not a woman who goes for a chemical abortion who doesn’t know about reversal & abortion pill rescue.

The so-called ‘quick fix’ of a chemical abortion also relates to pregnancy loss, McDowell said. She participates in a group called the Abortion Recovery Coalition, a group of leaders that meets monthly and focuses discussion on abortion healing.

“In the past, it would take six to seven years, maybe eight, and then they’d see a woman who was now ready to receive healing from a past abortion,” explained McDowell. “Now with chemical abortion and women having such a horrific experience at home, the abortion recovery programs are getting calls sometimes 24 hours after a woman has an abortion.”

That includes women who have attempted to save their pregnancy through abortion pill reversal (APR) but were not successful, she said.

Other notable statistics from Heartbeat’s 2020 report include:

• There are more than 1,700 Heartbeat affiliate pregnancy help organizations in the United States, with more than 1,000 serving as medical clinics.

• 12 new centers were accepted into the Life Launch grant program in 2020, including organizations in Napa, California and Scottsbluff, Nebraska.

• Heartbeat affiliates are found in 68 countries and two territories throughout the globe.

Something else Walden noted involved the annual budget for pregnancy centers, which increases each year. Despite COVID, many centers experienced significant increases in donations, he said.

“I have seen people really step up,” Walden said. “Some centers have struggled through COVID financially, no question, but the stories I’ve heard more are the donors who have stepped up in extraordinary ways.”

For example, a donor for one center covered three months of that organization’s budget last year, and in some cases where a banquet was held with just half the usual number of attendees, “they kept up with their budget from the year before anyway or went well above,” he said.

“The commitment of people – that really struck me,” Walden said. “I think they said, ‘We’re either in or we’re not,’ and they jumped in. A lot of supporters gave more – a lot more.” 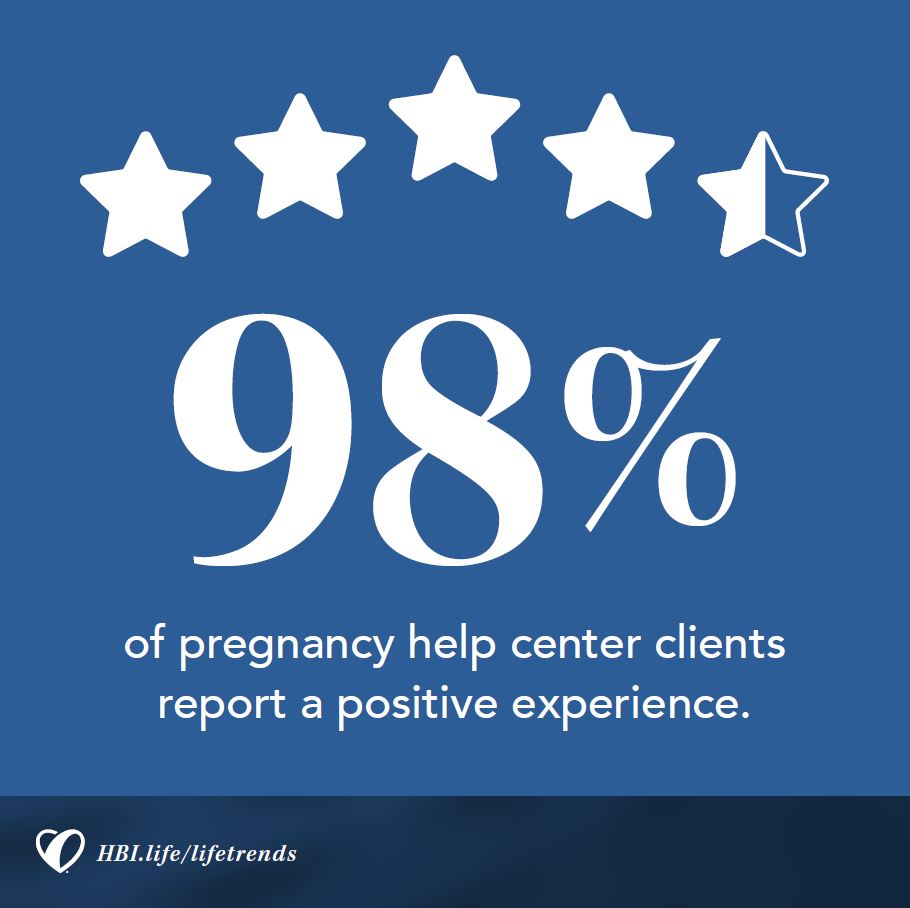 With 2021 nearly half-over, new trends will likely become apparent, such as greater enlightenment about human trafficking, and those paths are good for the pregnancy help movement, according to McDowell and Walden.

“Women’s issues are so complex – think about human trafficking and domestic violence; we in the pregnancy help movement need to continue to grow,” McDowell said. “There’s so much opportunity to learn and grow. We have a challenging atmosphere … but (we’re) Spirit-led. We have the knowledge of where to grow, and we are led by God.”

“We need to stay connected to each other, stay informed because things are changing, and stay relevant to our clients,” he said. “We need to listen to their needs – that’s what Jesus did – and we have the capacity to discern their needs … and meet them.”