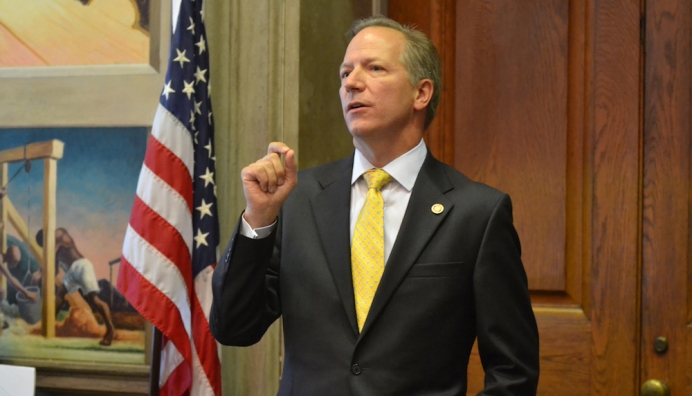 A pro-life state senator in Missouri is calling for a special legislative session to strike down a St. Louis city ordinance that prompted a nonprofit maternity home and two other organizations to file a lawsuit earlier this week.

Writing an op-ed in Thursday’s edition of the St. Louis Post-Dispatch, state senator Bob Onder urged his fellow senators to return to the state capitol in Jefferson City and complete a legislative override of St. Louis Ordinance 70459, which the ordinance’s pro-life opponents say creates an “Abortion Sanctuary City.”

The ordinance prohibits any organization, church or business from hiring or firing employees—even excluding from membership in the case of churches—on the bases of what the code refers to as, “reproductive health decisions or pregnancy status.”

That requirement, says Onder and others, amounts to forcing pro-life entities to support and even fund abortions of their own employees.

“These cases demand an immediate response to clarify state law, to protect the health and safety of women,” Onder, a physician by trade, wrote. “This is not an issue that can wait until January 2018, but demands a special session of the Legislature.”

After the state’s lower house passed a bill that would nullify St. Louis’ new city code this spring, the senate’s effort to adopt the same measure stalled as the season came to a close. That left in the lurch groups like Our Lady’s Inn, a pro-life maternity home that has been serving women for over 35 years.

Filing a lawsuit May 22, Our Lady’s Inn challenged the code alongside a Catholic grade school and a local businessman through the non-profit Thomas More Society. In the lawsuit, Thomas More Society pointed out five ways the code violates the U.S. Constitution’s guarantees under the First and Fourteenth Amendments, as well as three more ways it runs counter to existing state laws.

“The city has taken the protections typically granted to prevent discrimination for ‘race, age, religion, sex or disability’ and applied them to those who have made or expect to make ‘reproductive health decisions,’ where ‘reproductive health decisions’ is so overbroad as to include any decision that is any way related to contraceptive use or abortion.” Sarah Pitlyk of Thomas More Society said in a press release Monday.

“The law would therefore force nonprofit organizations like Our Lady’s Inn, whose mission is to promote and facilitate abortion alternatives, to hire abortion advocates, despite their opposition to the ministry’s reason for existence.”

One woman housed by Our Lady’s Inn, Andrea, was homeless five weeks before she gave birth to her first baby. With the help of Our Lady’s Inn, she welcomed her child and went back to school to become a Licensed Practical Nurse (LPN).

Now married and working as an LPN, Andrea is one of over 6,000 women Our Lady’s Inn has served since opening its doors in 1982.

St. Louis’ new ordinance would force Our Lady’s Inn—along with 17 fellow pro-life nonprofits—to choose between defying the law and paying staff members who do not support their own life-affirming mission.

“The law would therefore force nonprofit organizations like Our Lady’s Inn, whose mission is to promote and facilitate abortion alternatives, to hire abortion advocates, despite their opposition to the ministry’s reason for existence,” Pitlyk said.