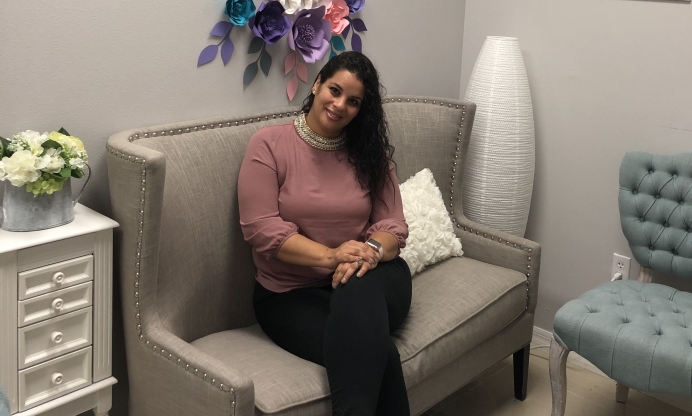 Every day, as she drove north from her home on the southern edge of Kissimmee, Fla., to serve as center director at the main office of JMJ Pregnancy Centers in Orlando, Puerto Rican-born Ivette Rodriguez wondered what God was going to do for pregnant women in her own neighborhood.

Rodriguez knew from her years as a volunteer with Osceola Pregnancy Center in downtown Kissimmee, that staff there were serving to their limit. The same was true at JMJ’s Kissimmee office farther southeast. But women in her own neighborhood were falling through the cracks.

Then in spring of 2014, Planned Parenthood invaded that neighborhood.

By that time, Rodriguez knew what she had to do.

“God had been waking me up at three in the morning every day for a whole month,” Rodriguez said. “The doorbell would ring and there would be no one there. Or my dog would run in and awaken me. ” Some days she just woke up and started praying automatically.

From those early-morning prayer times emerged a journal full of new approaches to ministering deeply to women through a new pregnancy center where she would spend the majority of her time working one-on-one with clients. But those ideas and burgeoning plans—including her own flavor of spiritual emphasis in serving clients—didn’t seem to fit her work at JMJ in Orlando.

“I was confused,” Rodriguez said. “I told God, ‘It doesn't make sense! This is crazy.’ He said, ‘I never told you it was for JMJ; it was for your pregnancy center.’"

Though rich in skills gained from working as a medical assistant to a pro-life doctor as well as her service with Osceola Pregnancy Center and as center director at JMJ, Rodriguez hesitated to leave her paying job to create a new pregnancy center from scratch.

“I kept saying, ‘No, let me stay a little longer; I want to save more money, pay a few bills,’” Rodriguez said. “God kept telling me, ‘It's time now. It's time now.’ Little did I know why there was the urgency to leave: Planned Parenthood had invaded my community.”

Discovering that, Rodriguez resigned from her job, committing her family to living off her husband’s income alone until her center was up and running.

Her passion for serving Kissimmee women in crisis caught the attention of several pastors who led Breach Ministries, a broad community service organization. They helped her file a “doing business as” arrangement under their organization’s umbrella. Rodriguez’s dream, Beyond Pregnancy Care Center, was now an entity, with its name listed on Breach Ministries’ website.

Rodriguez’s next challenge:  to educate her community about what, exactly, a pregnancy center does. Both Osceola Pregnancy Center and JMJ are supported by a handful of active churches, while many churches in the area have remained uninvolved and in the dark about the nature of pregnancy help ministry.

As Rodriguez has introduced her vision to the community, more churches are catching on. “They're learning as they're helping,” Rodriguez said. "They're extending themselves little by little.”

But while the community slowly learned the value of supporting her center, Rodriguez’s family struggled to make ends meet. When many months passed with no building and no funding, her husband at last suggested that she go back to work.

The very next day, Rodriguez spotted a “space for rent” sign at a plaza near her son’s school. She asked the landlord if he had 2,000 square feet available. He didn’t, but he showed her a small office with a shared public bathroom. Then he threw in a conference room.

“When he showed me the conference room, I could see breastfeeding classes, parenting classes, marriage groups, Christian counseling—all these programs coming into place,” Rodriguez said. Not wanting to wait any longer to save babies from abortion and share God’s hope with women in crisis, she told the landlord, “Okay, I’ll take it.”

Still she had no idea how she would pay for it.

Only days later, while touring the rooms with her pastor friends, Rodriguez received a text from her aunt: “Ivette, I'm depositing money into your account.” That gift would cover the first, last, and next month’s rent, plus enough to pay for her business license.

As of May of 2017, Beyond Pregnancy Care Center had a home. All that was left to do was fill it with staff, volunteers, supplies, materials and—of course—clients.

In the midst of getting her center up and running, Rodriguez realized she could use time away from her ongoing efforts to invest in her own leadership skills, so she applied for a training for new directors at Heartbeat International’s Pregnancy Help Institute. But getting to the training at Heartbeat International’s headquarters in Columbus, Ohio, would require a scholarship. And that, she thought, would take a miracle.

That miracle occurred three weeks later. While driving, she glanced over when her cell phone lit up, announcing that the scholarship was hers.

At the Institute in early August, Rodriguez posted frequent Facebook messages celebrating how valuable the in-depth training was to her. Two Florida pastors noticed the posts and contacted her, impressed with her professional approach to her new role.

One pastor’s message began, “Morning, Life Fighter!” and then invited her to share her center’s mission at a pair of concerts in the area this winter. The second pastor asked her to present her ministry at his church, in advance of a concert to be held benefiting Beyond Pregnancy Care Center.

By the end of her training, Rodriguez felt equipped to launch that center. She had fundraising events on her calendar, and her center’s first major gift in hand: $5,000 from the same anonymous donor who funded her scholarship.

“My goal was to incorporate on my own, but I never had the money to do that,” she said, noting that her DBA designation had put off some potential donors. “The remainder will go to other operational costs.”

With these victories in place, Rodriguez was closer than ever to opening in Kissimmee, and was beginning to dream of starting another center near her hometown in Manatí, Puerto Rico.

Then Came Hurricanes Irma and Maria

Blasting Rodriguez’s dreams, Hurricane Irma swept through Kissimmee in early September. Her center’s rented spaces were safe, but her personal resources stretched to breaking as she sheltered and fed her own family, other relatives, and a menagerie of pets during that storm.

Then, she watched as Hurricane Maria endangered other family members still living in Puerto Rico, in the impoverished area of Palo Alto in Manatí.

“I have an elderly grandfather with dementia,” Rodriguez said. “And my father is diabetic. His tin roof blew off and he had to run to my cousin’s house. My sister was six months pregnant after several miscarriages. I worried that she might lose this baby, too, from the stress.”

In another Puerto Rican town, Rodriguez’ husband’s family was trapped when Maria took out their only bridge.

Rodriguez had to wait a week and a half to find out her loved ones had all survived. Some were nearly out of food. All had lost most of their meager possessions. And her father needed wound care, which the hospital couldn’t provide without water, lights, and medicine. While managing care for family near and far, Rodriguez went through two weeks of crippling sciatic nerve pain. Bedridden, she could do no work toward her center’s opening.

“I am not a sick person,” she said. “When these physical problems came out of left field, I prayed, "Lord, what lives are we going to touch? What is this pregnancy center going to be, that I'm getting so attacked?"

Meanwhile, she grieved for Puerto Ricans being preyed upon by abortion businesses in the wake of the disaster. “

Abortion rates are very high there,” Rodriguez said. “Now the excuse is going to be, ‘Look at the devastation. You can't take care of a child here. How are you going to provide for your baby?’ I've actually been praying, ‘Lord help me find property over there, now the property rates are going to go down. Lord, open a door!’ We can't have babies aborted because of a hurricane. A hurricane is not stronger than my God.”

The two hurricanes have, however, diverted fundraising efforts by the churches that contacted her back in August. Beyond Pregnancy Care Center’s official grand opening—originally scheduled for October of this year—will have to wait.

“I know my God is always on time,” Rodriguez said. “The day I officially open my doors will be the day He has ordained.”

Even without a grand opening, Beyond Pregnancy Care has already begun steering women clear of Planned Parenthood, offering them a better way forward in an unexpected pregnancy. “Right now, I am seeing clients privately,” Rodriguez said. “Every person who comes my way—I don't want to say no. I want to have my doors open for that.”

At a recent community-wide event, Rodriguez’s booth drew more traffic than the one right next to hers: Planned Parenthood’s.

“They were giving condoms to 12- and 13-year-old girls,” Rodriguez said. “So I made sure I got to share the truth with them, and shared a fetal model I had so that they knew what a baby really looks like instead of hearing it was a blob or clump of cells."

This competition for the hearts of young women is why Rodriguez and her friends at Osceola Pregnancy Center plan to tag-team client referrals.  Roughly six miles apart, each on opposite sides of Planned Parenthood’s clinic, the two pregnancy centers will coordinate their schedules to accommodate women from both communities.

“The need here is tremendously great, so we’re going to work together,” Rodriguez said. “The days they’re closed, I'll be open so we know they're coming to us, not Planned Parenthood.”