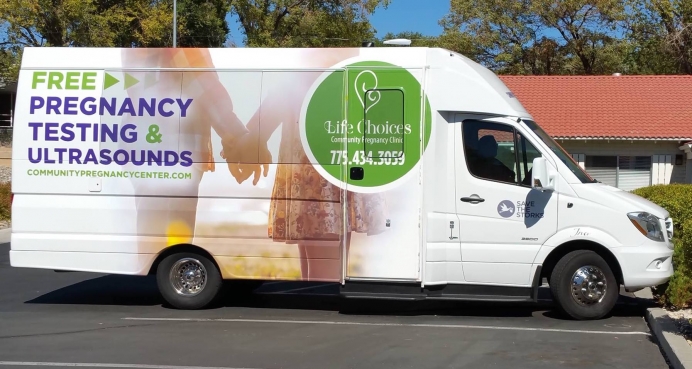 Key Changes on the Horizon for Nevada Pregnancy Center

As the New Year dawns, a pregnancy center in Carson City, Nevada, is preparing itself for new season that will include a new outreach to fathers and a change in leadership.

After 10 years at the helm of Life Choices Community Pregnancy Clinic where she’s overseen key areas of growth at the center, including a dramatically increased ability to offer clients a look at their babies via ultrasound, as well making inroads to the community’s public schools, executive director Kimberly Burchiel is set to pass the baton to Nick Emery in mid-January.

Burchiel’s tenure was also marked by a significant victory for pro-lifers in Nevada’s capital city. In 2013, Life Choices moved next door to a Planned Parenthood —sharing an internal wall with the abortion chain—then watched as it went out of business the next year.

“Our plan was to be kind to their employees and clients—never combative in any way,” Burchiel said. “The result was that unborn babies were saved. We can look at certain children and know that their life is a result of the Lord using us and our willingness to be obedient.

“When they closed down six months after we moved in we were surprised, but we praised God for moving them out of our town.”

With Planned Parenthood closed down and gone from town, Life Choices moved ahead with another significant goal to reach abortion-vulnerable women in late 2016, adding a mobile ultrasound unit to serve the rural areas in and around the city limits.

The unit, purchased through Save the Storks, hit the road in the spring of 2017, with Life Choices reaching to Lake Tahoe, as well as small towns near Carson City. Next up for the mobile unit, Burchiel hopes, is the campus of University of Nevada at Reno and its campus community of 20,000-plus students.

“We’re really just getting the mobile component of the ministry off the ground,” Burchiel said. “We’re hoping to reach the rural communities that aren’t currently being served. We also feel that being on the college campus would be significant. And though we were denied access to the UNR campus, we are still praying the Lord would open up an opportunity to park very near the campus. Though the campus is in Reno, we know the only influence on campus for pregnant students is pro-choice, encouraging abortion.

“We’d like to have the opportunity to bring the loving, compassionate, pro-life approach of a pregnancy center to the campus and are trusting the Lord for the timing.”

With Emery serving as executive director beginning next month, Life Choices is seizing the opportunity to invest in the lives of the young men involved in unexpected pregnancies. At the top of his to-do list, Emery plans to gather men to volunteer as part of the first wave of an ongoing fatherhood program, using curriculum developed by the National Fatherhood Initiative.

A recent study shows that as many as 74 percent of women who resort to abortion feel pressured to do so—with pressure to abort most often coming from the father of the child. Life Choices is seeing the same truth at play in the women it serves every day.

“There is a great need for this program,” Emery said. “We want to be able to equip men to not only be good dads, but also to live with respect and integrity, providing for and protecting the mothers of their children, and breaking the cycle of absent fathers. We recognize that many  fatherless children are abused. We want to speak to where they (the men) are and give them knowledge. The program gives us opportunity to create our own verbiage, similar to Earn While You Learn.”

Goals for the New Year don’t stop there for Life Choices. Seventeen years into offering free ultrasounds—and just a year into taking those services mobile—the center is planning to strengthen its marketing strategy and partnerships with local churches.

With the center seeing a noticeable increase in women who see abortion as their best or only choice over the past year, Burchiel said the team at Life Choices is more aware now than ever of the spiritual dynamics at work behind the scenes.

“We thank God for the opportunity to be here at this very pivotal time in history,” Burchiel said. “We must always remember that we don’t fight against flesh and blood and the weapons of our warfare are not carnal but mighty in God for pulling down strongholds. These are the women, men, and families that Life Choices exists to reach with love, compassion, truth, and the good news of Jesus Christ.”