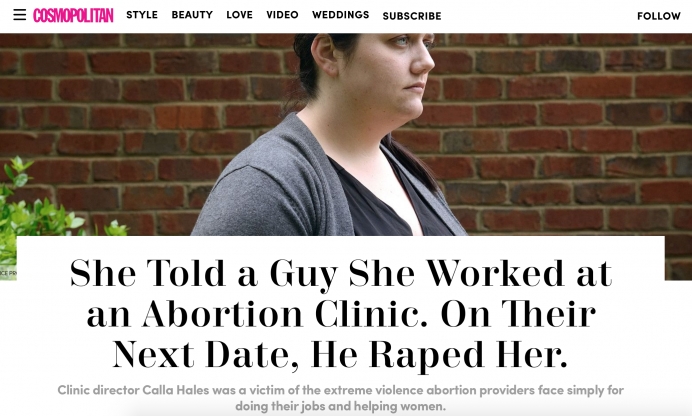 Rather than seeking justice for a rape victim, Cosmopolitan is exploiting her story to prop up a false narrative against pro-lifers.

In Haste to Condemn Pro-Lifers, Cosmopolitan Allows a Rapist to Walk Free

Reaching what can only be described as a new, heartbreaking low, Cosmopolitan ran an article Monday arguing that opposition to abortion leads not just to “extreme violence,” but—at least in one case—to rape.

In doing so, the so-called “women’s” magazine is likely allowing a North Carolina rapist to stay free and unaccountable.

The goal of the piece, written by Rebecca Grant, was made plain by its headline: “She Told a Guy She Worked at an Abortion Clinic. On Their Next Date, He Raped Her: Clinic director Calla Hales was a victim of the extreme violence abortion providers face simply for doing their jobs and helping women.”

Leveraging a rape Hales suffered in late 2015, Grant alleges that not only her perpetrator motivated by pro-life convictions, but that the attack itself was indicative of swelling anti-abortion extremism.

While Hales said she refused to press charges against her attacker out of concerns that he might seek “retribution,” Grant lays the blame on abortion opponents such as those peacefully protesting the deadly practice at the Charlotte and Raleigh locations of A Preferred Women’s Health Center (APWHC), where Hales serves as director.

After opening the article with the story of Hales’ sexual assault, Grant backtracks to tell readers that Hales’ parents purchased APWHC when she was 8 years old, so she grew up learning to live in a contentious environment as a result.

Curiously, Grant then goes on to cite a 2016 National Abortion Federation report that actually shows incidences of violence against abortion businesses on a steep downturn over the past seven years. By NAF’s count, even non-violent crimes such as trespassing fell by more than 53 percent from 2010 to 2016 as compared to 2000-09.

Nevertheless, Grant attempts to prove that a rise in reported picketing in front of abortion clinics is tied to Hales’ rape:

In its 2016 report, the National Abortion Federation (NAF), which monitors clinic harassment and violence, found that picketing, vandalism, obstruction, invasion, trespassing, burglary, stalking, assault and battery, and bomb threats are all on the rise. Clinics reported 60,000 incidents of picketing that year, an all-time high since the NAF began tracking these statistics in 1977. The report also documented a five-fold increase in hate speech and internet harassment, which escalated after the election. The 2016 National Clinic Violence Survey, published by the Feminist Majority Foundation, found that the percentage of clinics reporting the most severe types of anti-abortion violence and threats of violence has dramatically increased from the first six months of 2014 to the first six months of 2016 — from 19.7 percent to 34.2 percent. Hales was raped in November 2015.

Now abortion rights advocates fear the violence and harassment may get even worse. The Freedom of Access to Clinic Entrances (FACE) Act, passed in 1994, made it a federal crime to use force, threat of force, or physical obstruction to interfere with a person’s right to obtain or provide reproductive health services, but it’s only effective if enforced.

Following Hales’ rape in late 2015, Grant writes, she declined to name her attacker or press charges against him—even when he continued harassing her, going as far as to join other pro-life abortion opponents at the clinic on a regular basis.

Grant then uses Hales’ victimization as a springboard to attack not only peaceful pro-life protesters, but unsurprisingly, President Donald Trump and his administration for an uptick in violence that—again, even according to the abortion industry’s own reporting—is not actually occurring.

Tweet This: In its haste to condemn #prolife ppl, @Cosmoplitan is allowing a rapist to walk free.

Quoting NAF president and CEO Vicki Saporta—who has blamed the Center for Medical Progress and its undercover work exposing the abortion industry’s side-business of selling body parts harvested from the babies it aborts for a “flood of hate speech, threats and violence”—Grant argues that “extreme violence” is the unavoidable outcome of opposing abortion.

“Trump has encouraged people to express their basest emotions and to threaten people — he has given the anti-abortion movement license to increase their vitriol, if not their criminal activities,” Saporta said. “We've seen time and time again that if anti-abortion extremists are allowed to get away with lower-level criminal activities, those escalate into [extreme violence].”

While Grant and Cosmopolitan blame pro-life opposition to abortion for violent attacks like the one Hales suffered, their own reporting—if true—is allowing a violent sexual predator to remain free and unaccountable for his crime.

Rather than seeking justice for rape victims like Hales, Cosmopolitan blames those opposed to an industry that not only takes a million human lives every year in the U.S. alone, but that routinely covers for rapists and other sexual predators in order to keep up its profit margin.

Calla Hales and other rape victims deserve far better than this. Rather than exploitation as a pro-abortion mascot, she deserves help and healing from an attack that is in no way her fault.

Meanwhile, her attacker deserves to be brought to justice and his future victims deserve protection. Shame on Cosmopolitan for denying both.