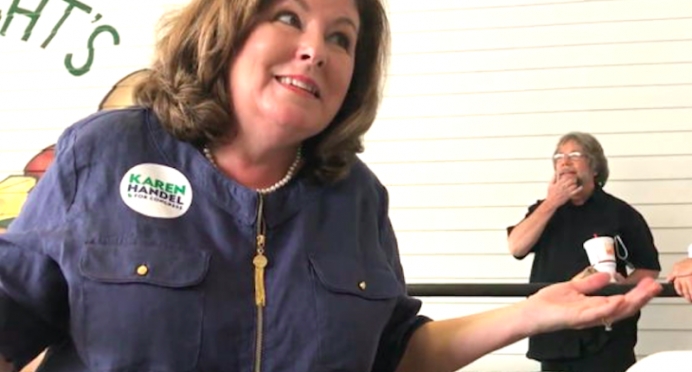 Karen Handel was out-spent 7 to 1, yet took home Georgia's 6th district in a special election June 20.

Talking heads and online pundits are fretting, wondering how in the world the Democratic Party could pour tens of millions of dollars into the Jon Ossoff campaign in Georgia’s 6th Congressional District, only to come up empty in the June 19 special election.

For those not following this race, Karen Handel (R-GA) overcame a double-digit polling deficit to win, and will replace Tom Price, who left his post to join the Trump administration as Secretary of Health and Human Services. Handel will be up for election again in 2018 but for now, the seat remains in the hands of Republicans.

To political pundits, this campaign was to be a referendum on President Trump’s policies and Democrats saw an opening. In November, Trump won the district by two points. Democrats believed they could outspend and outwork Republicans, flip the district and declare Trump’s presidency effectively over, even before the 2018 off-year elections.

In the April two-party primary, things looked good for Democrats. It was Ossoff who led the 18-candidate field, winning 48.1 percent of the vote and nearly ending the election. Handel led the other 17 hopefuls, garnering just 19.8 percent.

Democrats had victory in sight and pumped millions of dollars into the race, making this election the most expensive congressional campaign in history. While numbers are still sketchy, most estimates indicate more than $57 million was spent by the two candidates. Who spent the most? Ossoff, by far.

As of the most recent FEC filing on May 31, Ossoff had blown through $21,977,310 while Handel spent just over $3.1 million. In the last few weeks, both parties emptied their coffers as Handel pulled closer to Ossoff.

What’s intriguing is Planned Parenthood’s possible motivation for going all-in for Ossoff. Back in 2012, Handel was a key leader at the Susan G. Komen Foundation, the nationally recognized organization dedicated to eliminating breast cancer.

But Handel, then VP of public policy for Komen, pointed out an inconvenient truth: The Komen Foundation was giving a lot of money to Planned Parenthood, an entity which does not own one mammogram machine and was doing little or nothing to stop breast cancer. Handel attempted to derail Planned Parenthood’s money train.

A firestorm erupted and Handel stepped down.

On Tuesday night however, Handel soared above the spending and won by nearly four percentage points, besting President Trump’s showing in GA-06 in November by two points. The referendum on Trump failed.

While Democrats try to put a positive spin on the crushing defeat by saying Handel’s margin pales in comparison to the 23-point margin Price won by in November, there’s something they don’t say. Price’s opponent spent less than $1,000 in his campaign while Ossoff is trying to figure out how $30 million can buy so little, other than a few percentage points.

To help us understand how much this is, if Planned Parenthood pumped this kind of money (per voter) into a presidential candidate, they would have spent $387 million dollars for Hillary Clinton’s 2016 campaign and her 65 million votes.

Planned Parenthood bet the house on Jon Ossoff, its chosen candidate. And took a political whipping as a result.

Today across the country, Pregnancy Help Ministries are reaching hearts. We’re not pouring our money into the next election, we’re doing our job and advancing our mission.

At Planned Parenthood however, there is angst and hand-wringing. Another house member is headed to Washington, ready to take away its $500 million. And it can’t come too soon for me.