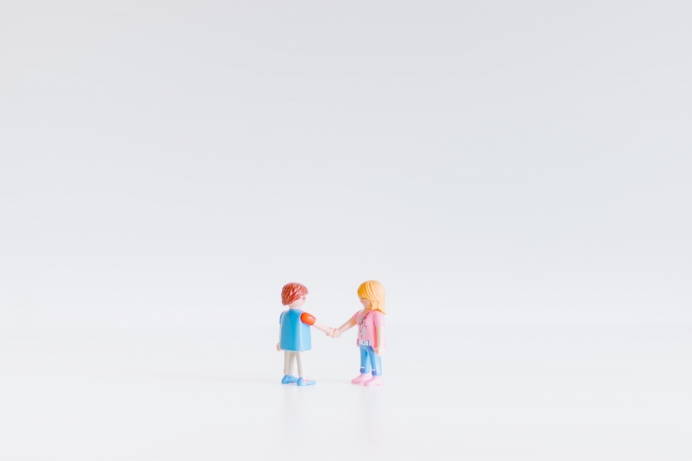 Following the numbered diagram, I find the table and canopy which serves as our pregnancy help clinic’s booth at our local state college’s fall Welcome Fair.

I set out fetal models, candy, books, and free gifts, then glance across the way—and freeze.

Are you kidding me? I think. They set us up right across from Planned Parenthood??

Student traffic begins flowing along the walkway. After a while, I get thirsty and decide to get a water bottle from a booth where they are giving them out.

Go to the Planned Parenthood booth and offer some water.

I know that voice. For me, obeying God feels a lot like jumping off the high dive during my childhood swim lessons. If I don’t do it quickly, I just might back out.

So I go straight to the Planned Parenthood booth, introduce myself, and ask the lady if she would like some water. She says yes, so I fetch us both water bottles and return.

We chat a bit and I find out “Sarah” has three children. We talk about our mom concerns and joys a bit before I return to join my helper at our booth.

The following year, Sarah is at the Planned Parenthood booth again. We visit some more.

Years later, I still think of Sarah and pray for her. She seems like a sweet person.

No doubt there’s a story behind why she works for Planned Parenthood—a story I haven’t had a chance to learn.

What I have learned, though, is that people are worth loving even if their values don’t match mine.

Working in the life-affirming mission, we can be tempted to take a defensive posture, thinking of the cause of life as a war to fight.

What if, instead of fighting a war, we focus on planting seeds? Jesus talked about tiny mustard seeds that grow into huge trees, and tiny bits of leaven raising whole loaves (Matt. 13:31-33).

I think of the film “Unplanned”—how it was love that changed Abby Johnson’s heart about abortion. The folks at 40 Days for Life befriended her. They didn’t argue with her or tell her she was evil.

They simply prayed for her and loved her.

That’s how she knew she could trust them when the revelation about what abortion really is nearly crushed her.

As Christians, we don’t have to agree with people, but we do have to care about them.

Love of neighbor can’t be an abstract, generalized love for humanity divorced from how we treat individuals.

If we claim that we love our neighbors by working to save endangered preborn children, yet turn around and mock and malign abortion advocates, we end up missing the point entirely.

This applies to how we treat folks who favor abortion in general—but it also applies to our attitudes toward political leaders who support abortion.

A pro-life friend of mine was complaining about his ungodly governor recently when the Holy Spirit interrupted him.

You care more about his politics than you do his soul.

My friend repented and began praying for his governor.

In the devotional Salt and Light by Chris Tiegreen, the piece called “Making Friends of Enemies,” which he wrote for August 19, 2019, reads:

“Far more lives have been changed by demonstrations of good will than by unmovable attitudes. People like Daniel and his friends, and Joseph before them, served ungodly kings and softened hearts in the process.

They were put in a position of honoring selfish royal agendas while maintaining their integrity and doing good for kingdoms that often exploited their people.

They understood a vital truth: Befriending adversaries is far more fruitful in the long run than overpowering them.

If you seek to influence your world, remember that. Seek the welfare even of the people you disagree with and don’t like.

Love changes corrupt societies and even the most hardened hearts.”

A couple of years ago, a preacher at our church camp described how the Lord had prompted her to walk the halls of power in Washington to pray for the nation’s leaders.

She and a worship leader found themselves in the office of a political leader who was not exactly a champion of the pro-life cause, nor was his take on other issues necessarily Christian. Yet they offered to pray for him.

This man carried a tremendous load of stress, including illness and loss in his family along with the heavy responsibilities of his job.

As the Christians in his office worshiped and prayed for him, such peace overcame this politician that he said gratefully, “You are welcome to come back anytime.”

That’s how the Kingdom of God comes to earth—by planting seeds in hearts.

The gospel is far more powerful than earthly political victories.

Love is stronger than hate.

As we do this great work, let’s make friends of our enemies. Let’s honor our fellow image-bearers.

It’s the pro-life way to live.

Tweet This: As we do this great work, let’s make friends of our enemies. Let’s honor our fellow image-bearers. It’s the pro-life way to live.