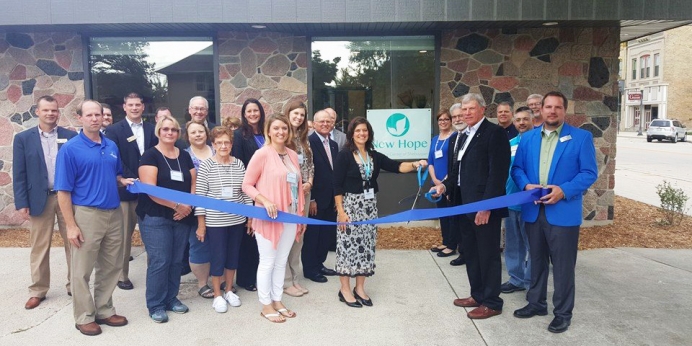 Hope Springing in Bratwurst Capitol of the World

Sheboygan County, Wisconsin has long been home to an active pro-life contingent. From baby bottle campaigns, to 40 Days for Life vigils in front of the local Planned Parenthood, the people have not been silent about their pro-life beliefs.

A long-held dream of Sheboygan’s pro-life community was realized Aug. 26, with a ribbon cutting at New Hope Pregnancy Center, hosted by the Chamber of Commerce for the “Bratwurst Capitol of the World.”

In 2012, the Knights of Columbus of Sheboygan held a fundraiser to buy an ultrasound machine for the neighboring pregnancy center of Manitowoc. Much to their surprise, they raised enough to fund not one, but two machines. Could it be that God was opening a door for their own pregnancy center?

By 2013, a board made up of leaders from various pro-life groups in the area came together with that objective in mind. Within a year, the funds that were raised beyond the cost of one ultrasound machine were repurposed to help purchase a building for the future center.

“We started demolition early in the year,” said Jacky Drewry, New Hope’s executive director. “We’ve had so many people donate time and materials. Our building budget came in considerably less than what we expected.”

Drewry knows first-hand the struggles of unexpected pregnancy. Her voice softened as she described her fear as a young woman desperate and unsure of her options. After she had confided her dilemma in a trusted professor, she chose to keep her child.

“During that period of my life, God placed some very pro-life people around me,” Drewry said. “My son is now 26 and I look at him and think I could have made a different choice. I want to give back.”

Tweet This: "They were sold a baggage of lies about #abortion. It breaks your heart." #PPAct

Realizing that her story could have turned out much differently, Drewry says she approaches post-abortive women with an attitude of “there but for the grace of God, go I.”

Besides Drewry, other volunteers at New Hope have walked similar paths and chosen abortion.

“Abortion has had such a negative impact on their hearts,” Drewry said. “They felt when they made that choice they were poorly informed about long-term affects. They were sold a baggage of lies. It breaks your heart and you grieve. You walk in truth and try to take others by the hand.”

The impact the center will have on the community is already coming to realization. Within hours of opening their doors, a young woman chose life for her child. She herself had been adopted and now she is giving her unborn child the same chance at life.

The vision for New Hope might include a mobile medical unit. Another long-term dream is to begin a safe home for victims of sex trafficking, an atrocity that is becoming widespread in the state of Wisconsin.

In the near future, New Hope plans to use the funds the Knights of Columbus raised to purchase an ultrasound machine. With a medical director already waiting in the wings, the center hopes to be a fully operating medical facility within the next 6-12 months.

Tweet This: "The beauty lies in following God's leading and not being afraid." #prolife

To further these dreams, New Hope held an open house Sept. 10-11, allowing 300 community members a chance to see the building and meet the staff.  “We have been so incredibly blessed since the inception of the board and since the center has been going. God asked us to believe for the $89,000 mortgage.”  One donor has already agreed to match up to $25,000.

“When I look 10, 15, 30 years down the road, I don’t know what that looks like,” Drewry said. “The beauty lies in following God’s leading and not being afraid to make choices that are big!”

NOTE: This article has been edited for accuracy from its original version.

Is a new pregnancy help organization opening (or an established one relocating) near you? We'd love to know about it and tell your story! Leave us a tip and we'll help you tell your story!