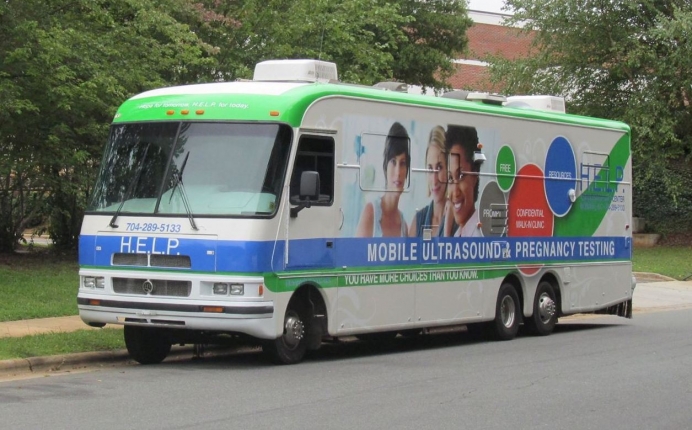 HOPE PRC's new mobile ultrasound unit, given as a gift from a nearby sister organization in rural North Carolina. Photo Courtesy: HOPE PRC

Soon, women in Anson County, N.C., will find HOPE Pregnancy Resource Center on the road once more, thanks to a donated RV from another center in nearby Monroe.

With the new wheels, HOPE has moved a major step closer to executive director Kathy Landon’s goal to, “get out in the middle of everybody.”

Landon and her team at HOPE wanted to serve an even greater number of women than they have already. Those under 18 have been the hardest to reach in the rural area, so she and her board began praying for a more effective way to connect with women across their sprawling county.

“We have a lot of young moms here in Anson County,” Landon said. “I know they’re there and we’re not reaching them.” “We felt like God was saying, ‘You need to go to them.’”

As Landon, her board and supporters prayed and considered options to reach more women, a board member brought up an interesting opportunity. H.E.L.P. Crisis Pregnancy Center in Monroe—believed to be the first pregnancy center in the state to add a mobile ultrasound unit—was getting a new window into the womb on wheels.

So, Landon reached out to her long-time mentor and friend at H.E.L.P., executive director Tara Quinn. Quinn and her board responded by offering to donate their used RV to HOPE. Not only that, Quinn’s board also agreed to pay to have the engine rebuilt as the RV changes hands.

“We are gifting them the unit because we feel that it has a greater value to continue being used for the kingdom of God for ministry than to sell it and just take the proceeds,” Quinn said. “We want to help Hope Pregnancy Center be able to make a difference in their community, and we are thankful that God is allowing us to do this.”

On the Road Again

Teamwork between the two centers runs throughout HOPE’s history. Back in 2014, HOPE’s only “office” consisted of a mobile unit borrowed two days a month from H.E.L.P. Parked outside the local Wal-Mart, HOPE held a strategic position directly opposite an area high school.

This arrangement began as Quinn frequently drove past the high school to visit family and caught herself wondering who—if anyone—was there to help the girls at the school.

“I began to be challenged, and our ministry began to pray about Anson County, and if we were supposed to assist in starting a pregnancy center,” Quinn said.

Quinn eventually connected with two Anson County pastors, George Hunnicutt and James Parks, to spearhead the project. With Quinn’s encouragement, Landon came on board as executive director. Ultimately, HOPE opened an office, which allowed them to continue providing ultrasounds—with a machine donated by H.E.L.P.—even after the center could no longer loan HOPE its mobile unit.

“We take our unit to one of the largest abortion clinics and the busiest in North Carolina, in Charlotte,” Quinn said. “We see babies saved weekly as a result of this unit and the power of ultrasound.”

H.E.L.P.’s work has been critical throughout their region of the state, Landon said.

For three years, HOPE has provided Earn While You Learn prenatal classes, as well as parenting classes using Essentials of Discipline with Dr. James Dobson. Recently, the center brought in a registered doula to start teaching childbirth classes. Clients who take any of the classes can receive necessities such as a layette, diapers, baby clothes, bassinettes and cribs.

“We also have the HOPE Chest, which is our clothing ministry,” Landon said. “We allow anyone to come in four times a year, basically once every 13 weeks, to get clothes for kids up to size 4-T. And we have diapers and maternity clothes as well. We just let them come in.”

Taking it to the Streets

In one of North Carolina’s poorest counties, Landon is fighting an uphill battle to bring clients into HOPE’s brick-and-mortar location, underscoring the value of reaching young women where they are.

“If we can get closer to them, they will have better access,” Landon said. “But we also want them to know we exist. Having a mobile RV parked at Wal-Mart with a sign that says, ‘Free pregnancy tests and ultrasounds’—the publicity from that is incredible.”

Tales of saved lives from HOPE’s early days with mobile ultrasound still tug on Landon’s heart, and she’s eager to tell about the women, children and families her center has impacted.

“A young woman who worked in a local store came up and knocked on our door,” Landon said. “She said, ‘Can I get an ultrasound?’ We said, ‘Yeah, sure, come on in.’”

Her paperwork indicated that she was considering abortion. Following her positive pregnancy test, the woman watched her baby on the ultrasound.

“She started crying; tears were just streaming down her face,” Landon said. “When we were finished with the ultrasound, she said, ‘I have an abortion scheduled for tomorrow morning. . . But I’m not going to go.’”

The young woman followed through on her new resolve.

“Seven or eight months later, we gave her a baby shower,” Landon said. “We sent something out to different churches to which our board members belong, and we got her a crib and pretty clothes. Later, she brought the baby back. And we love that, right?”

With the newly donated RV from H.E.L.P. and plans underway to purchase a portable laptop ultrasound unit to equip it, HOPE will soon have more stories to share. And Anson County women and their families facing unexpected pregnancies will have HOPE on their streets once again.