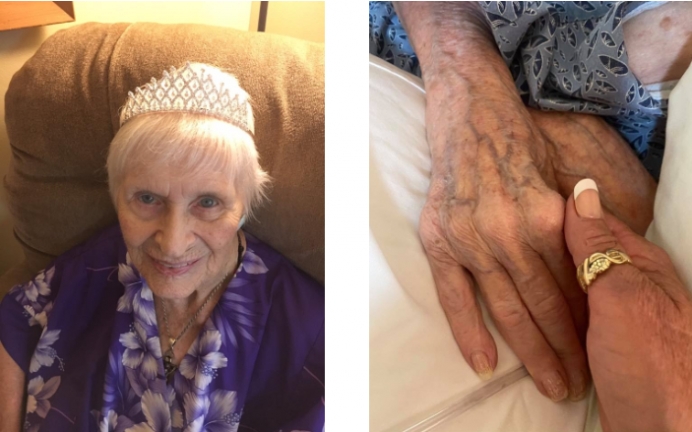 Her hands are stilled, her legacy lives on

Editor's note: Below we publish with permission a reflection by Dinah Monahan, the daughter of renown pro-life advocate Virginia Evers, on her mother's recent passing. Following Monhan's reflection is the story of the Precious Feet, written by Evers.

These hands are still now. No more picking the blankets or struggling to grasp. They are relaxed. They are beautiful. Let me tell you about these hands.

These hands embraced life for nearly one hundred years. (On Sept. 16th she would have been 100!) Most of those years, they never stopped doing. After she married our dad, they held six new babies, caressing our foreheads and tracing our cheeks. As we grew older, her hands swatted our butts, but never hard enough for us to cry. They washed countless diapers, made a mountain of meals, did endless piles of dishes. I can’t say she didn’t complain, it was a lot of work! But she also sang constantly during these tasks and her laughter came easy and often.

These hands also held many Pro-Life signs at rally’s and protests. They warmly greeted  Pro-Life friends, like Fr.Marx, Dr. Jack Wilke, Dr. Mildred Jefferson among others, who joined hands with her as the first generation of activists against abortion. Her fingers traced the photo of Dr. Sacco’s ten week feet of an unborn baby and her heart was moved. But she didn’t stop there. She created “The Precious Feet Pin” in memory of those ten week baby feet. As the International Pro-Life symbol, tens of millions have been distributed around the world. Each pin visually displays the humanity of the unborn infant and countless numbers of pre-born babies have been saved from abortion because of this little pin.  She and Ellis started The Heritage House which, under the guidance of their grandson, Brandon Monahan, has become the largest Pro-Life distributor in the world.

These hands graduated from hugging and comforting her six children to caressing and loving her 28 grandchildren and then her 70 great grandchildren. Her arms were always open wide and her heart was big enough to offer love to one more grandchild, one more stranger, one more single mother, one more baby.

Her hand shook those of President Reagan, Senators Barry Goldwater, Jon Kyle and John McCain to name a few, and these great people came to call her “friend.” Her hands were always offering small gifts of encouragement. Cory TenBoom met her once. When Mike and I visited the TenBoom house in Holland, we noticed a familiar small, distinctive card that said “God Bless You” tucked into the corner of Cory TenBoom’s last portrait photo. When I asked the woman there where it came from she said, “I don’t know her name, but a lovely lady gave it to Cory and she carried it with her always in her bible.” Mom’s smile, warmth and generosity left an impact on everyone she met.

Her hand held my dad's through 49 years of marriage. He was the steady one, her rock. She was the slightly crazy, fun and joyful one whom my dad adored.

On July 17, 2020, our mom, Virginia Evers, went to heaven. I am sure the first thing she did was grabbed our daddy’s hands, threw back her head and laughed with joy at the reunion.

In the words of a life-long friend: “Ginny woman (as the teens always called her) is a legend from my childhood, on so many levels. I will be sorry for your loss but so happy for her gain to be in heaven with your dad and family and to see Jesus face to face...oh what an event that will be!  I can almost see her walking and talking again with all her enthusiasm”

Virginia lived a full, productive and meaningful life. So many other lives are changed for the good because they knew her. We celebrate her passing and thank God for the many years she was with us. If you would like to make donation in memory of Virginia Evers, you may send it to Hope House Maternity Home, 1901 E. Deuce of Clubs, Show Low, AZ 85901

Tweet This: "Virginia Evers lived a full, productive and meaningful life. So many other lives are changed for the good because they knew her."

The Story of the Precious Feet

Every achievement, great and small has originated with an idea. Very often one good idea leads to still another, thus compounding the impact of the original idea. Such is the story of our Precious Feet lapel pin, identical in size and shape to the feet of a ten week old unborn baby.

It was God’s “idea” that you and I should be created in His image and likeness. He declared us His very own children from the moment of fertilization. This is verified in Holy Scripture: “Before I formed you in the womb I knew you, Before you came to birth, I consecrated you.” Jeremiah 1:5. Our body, God revealed, is a temple of the Holy Spirit.

On January 22, 1974 in San Diego, California, preparing for the March for Life on the first anniversary of Roe vs. Wade, prolifers placed a full page ad in the San Diego Union. Prominent in the ad was a picture of the tiny feet of a ten week old unborn baby. The picture haunted me. Dr. Russell Sacco had a remarkable idea back in 1970. The pathologist who shared his lab with Dr. Sacco kept unborn babies (fetuses) in formaldehyde lined up on a shelf. Dr. Sacco, father of four, had become acutely aware of the highly developed state of the very tiniest of these unborn babies. As a photographer, he envisioned the power of a dramatic picture: the tiny feet. Through the years his remarkable photograph of the perfect precious feet held between the thumb and forefinger has become synonymous with pro-life action throughout the world. I expressed my immediate reaction to Dr. Sacco’s classic photograph to my husband Ellis: “These precious little feet should be the pro-life movement’s official symbol”.

Dr. Sacco confided, “It has been difficult for me to comprehend the enormous impact my picture has had on the pro-life movement”. Our Precious Feet are the direct result of this great photograph. The impact is being felt around the world. The Precious Feet were designated as the “International Pro-Life Symbol” at a world-wide symposium in Dublin, Ireland in 1979. At this writing nearly 18 million have been distributed in 30 countries and 6 continents.

Ellis and I directed the Heritage House ‘76 from our home in Taylor, AZ. What started with the Precious Feet became a source for Pro-Life literature, bumper stickers, videos, and just about anything a Pro-Life group would need. For six years the proceeds of the Heritage House supported a home for unwed mothers, run by our daughter and her husband, Mike and Dinah Monahan. We also supported a local crisis pregnancy service known as “We Care.” In 1992 Ellis and I retired and Mike and Dinah took over. Two years later Ellis went to be with the Lord. No doubt he was ushered into heaven by countless babies whose lives he worked tirelessly to save. Mike and Dinah continued the work until Mike passed in 2016 the work today is continued by my grandson and his wife, Brandon and Dawn Monahan. After 45 years, Heritage House has expanded into one-of the largest providers of Pro-Life material in the country.

The greatest reward for our labor is the fact that the Precious Feet save babies' lives. We have received numerous testimonials attesting to this fact. From Atlanta, Georgia: a Birthright volunteer visited a pregnant teenager contemplating abortion in a juvenile facility. The volunteer gave her literature and the Precious feet pin from her lapel, explaining their significance (the girl was exactly 10 weeks pregnant). In the course of their conversation she learned that the girl’s roommate was pregnant and definitely planning on an abortion. We were later informed by letter “the Precious Feet pin did its work--we were able to save not one but two babies”.

Tweet This: "The greatest reward for our labor is the fact that the Precious Feet save babies' lives" - Virginia Evers

We are of the conviction that God performs His wonders through His children. It is to Him that we give our daily praises and thanksgiving for the creation of the Precious Feet.