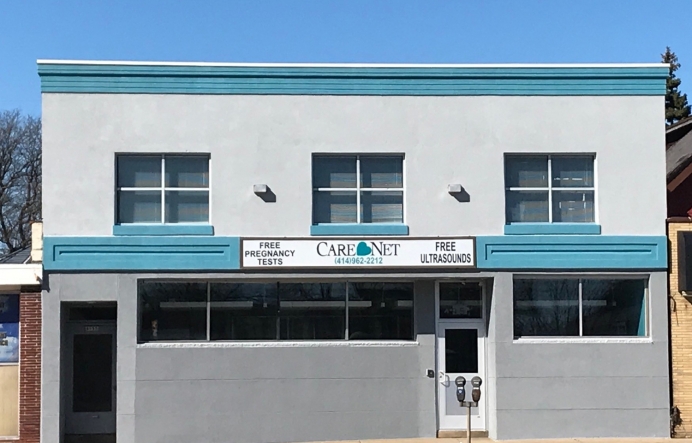 “Melinda” came to Care Net Pregnancy Center of Milwaukee in early 2020 with an intention to abort.

“She was early in her pregnancy,” said Rachel Schepp, executive director of the center. “We met with her, gave her options counseling and an ultrasound, encouraged her, and did anything we could to support her.”

However, she left, her intention remaining the same.

After several attempts to follow up, a center staff member finally connected with Melinda and learned she’d had an abortion.

“We told her we were still here if she needed us,” said Schepp. “We texted her a few months later to see how she was doing. She called us about two weeks after that text and said, ‘The abortion didn’t work. I can tell I’m still pregnant – something isn’t right.’”

Melinda, who had taken the abortion pill, went on to say she had contacted the abortion clinic but had difficulty getting answers and help. Care Net staff encouraged her to come in.

“We gave her another pregnancy test and ultrasound. She was nearly 30 weeks along,” Schepp said.

Melinda continued her pregnancy and her baby was born in late summer of this year.

“I asked her how she felt,” Schepp said. “She told me, ‘You know, I’m actually thankful I get a second chance. I knew it was a mistake and wrong in the first place.’”

“She’s come in twice, and she definitely sees her baby as a miracle,” said Schepp.

Chemical abortion numbers on the rise

Researchers estimate between 40 and 50 percent of early pregnancy abortions (10 weeks gestation and under) are done using the abortion pill, a combination of two drugs, mifepristone and misoprostol. The first pill is taken at an abortion clinic, however, many groups are pushing for abortion pills to be sent to women by mail, allowing them to take the drugs without a doctor’s supervision. This concept has taken deeper roots since the coronavirus outbreak.

However, these drugs are not without risk. The federal Food & Drug Administration (FDA) last year reported 24 deaths attributed to the abortion pill and more that 1,400 “adverse effects,” including nearly 275 hospitalizations from those drugs between 2012 and 2018.

Failure rates of the abortion pill range from two to nine percent, which could mean about 30,000 American women every year experience failure in the abortion pills they take. This often means they go through a surgical abortion.

Or, as in “Melinda’s” case, finding help through a local pregnancy center to continue her pregnancy.

Melinda believed she received a second chance and now has a beautiful baby.

Help after taking the abortion pill

Heartbeat International’s Abortion Pill Rescue Network (APRN) maintains a 24-hour-hotline. The internet presence of the APRN has assisted many women during the past few years, connecting those wanting to stop their chemical abortion with pregnancy centers and physicians who are willing to help those women. To date more than 1,000 lives have been saved thanks to Abortion Pill Rescue®.

Tweet This: Women receive care and compassion at pregnancy centers that can help them and save their babies.

Whether through regular services, from pregnancy testing and ultrasounds to options counseling and materials assistance, APR, or listening ears, pregnancy centers throughout the country offer compassionate care to women experiencing unplanned pregnancies.

Schepp and her team served more than 980 women last year, and this year they are on track to serve even more – from January and the end of August 2020, they have already seen more than 830 women walk through their doors. In addition to the medical services and pregnancy options education they provide, they also offer materials assistance to their clients and to the community.

“We give out gift bags and give away diapers and wipes,” Schepp said.

She has been director of Care Net of Milwaukee for five years. She summed up the work of all pregnancy center staff and volunteers.

“We love you regardless of what you choose,” Schepp said.

Being able to help “Melinda” and provide her that second chance gave Schepp great joy, she said, again summarizing how center staff and volunteers feel knowing they have helped a woman save her baby from abortion.

“I feel blessed to be part of her story,” said Schepp.