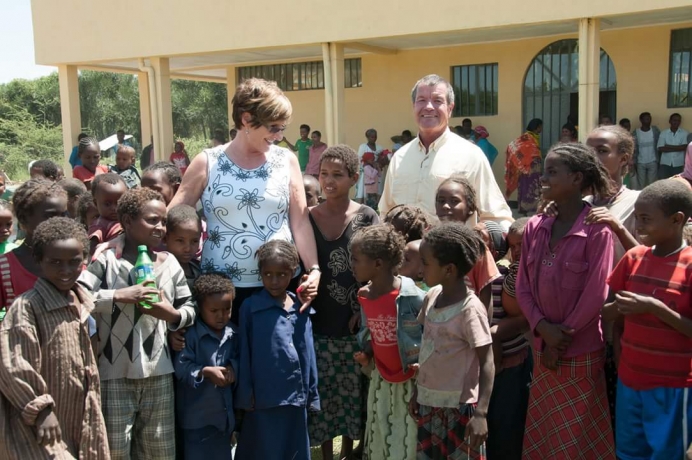 The pregnancy help community lost a key friend when Mike Monahan died in an ATV accident in the Arizona desert March 17, leaving behind his wife, Dinah, five children and 26 grandchildren.

Monahan, 65, was known locally for his work as a captain with the Navajo County Sheriff’s Search and Rescue Team, but he was also a long-time driving force in the pro-life community at the local, national and international levels.

“Mike Monahan was a constant and firm presence for all who knew him, a strong harbor of peace for troubled lives, a guide and continuous help for his children, a loving and kind grandfather to his grandchildren, and, above all, a pillar of support for his wife,” the family wrote at a GoFundMe.com page established to raise funds for Living Hope Women’s Center. “He will be dearly missed by his surviving wife, 5 children and spouses, 26 grandchildren, his brother Billy and his sister Katherine and by his community of thousands.”

Starting in 1991, the Monahans became owners-operators of Heritage House ’76, the world’s leading producer of pro-life merchandise with proceeds going to fund the work of pregnancy centers, a venture they had inherited from Dinah’s parents, Virginia and Ellis Evers.

Through Heritage House ’76, the Monahan family has introduced concepts to the pregnancy help community that include local fundraiser campaigns, Earn While You Learn curriculum that pairs material aid with educational empowerment for pregnancy center clients, and fetal models to help educate pregnant clients on their preborn baby’s stage of development.

Virginia Evers’ creation of the “Precious Feet” lapel pin was named the “International Pro-Life Symbol” in 1979, and since then, more than 11 million of the pins have been distributed globally.

Mike and Dinah’s son, Brandon, now heads the organization, which is headquartered in Snowflake, Ariz.

“We will miss him deeply and I am the most sad that the good he would have done is now missing along with him,” Brandon Monahan said. “But, he has made a difference in the lives of thousands in the time he had, and we were blessed to have him lead our family.

“He was always ready to help with any need and yet didn’t miss a chance to lay on the floor to play with the youngest of his grandchildren. At work he helped to save thousands of babies by designing educational items that showed the humanity of the unborn.”

Tweet This: Mike Monahan made a difference in thousands of lives, leaves behind a legacy of #prolife action.

The Monahans’ pro-life story dates back to the mid-1970s, when the couple took in a family of refugees from Vietnam. Over the years, they sheltered homeless families, “wayward teens, foster children widowed friends and young men in crisis who crossed the Monahan threshold,” the family said in a statement.

The organization’s locations in Show Low and Whiteriver are believed to be the only such outreaches on U.S. Indian reservations. One former client at the maternity home, Marcella Coto-Leon, shared her story before her U.S. congressmen in 2015 as part of Heartbeat International’s Babies Go to Congress.

Additionally, Mike and Dinah’s ministry has extended overseas to Ethiopia, where the couple founded a maternity home in the city of Adama.

“When I had the blessing of being welcomed by Mike and Dinah into their home and family in the White Mountains of Arizona a few years ago, I marveled at their 100 percent loving engagement with their children and grandchildren, including one of their "adopted" daughters from their many years of housing ministry,” Peggy Hartshorn, Ph.D., Chairman of the Board for Heartbeat International, said.  “I felt Mike's quiet but solid and strong presence, his Godly and manly leadership, both in their home and also in their business, Heritage House '76.

“He will continue to be a model as husband, father, and leader for the Lord not only for his family but for all those touched by life and example, from Arizona to Africa."

A memorial for Mike Monahan is scheduled for April 2. In lieu of flowers, the family asks that donations be given to Living Hope at the following link: https://www.gofundme.com/michaelmonahan.