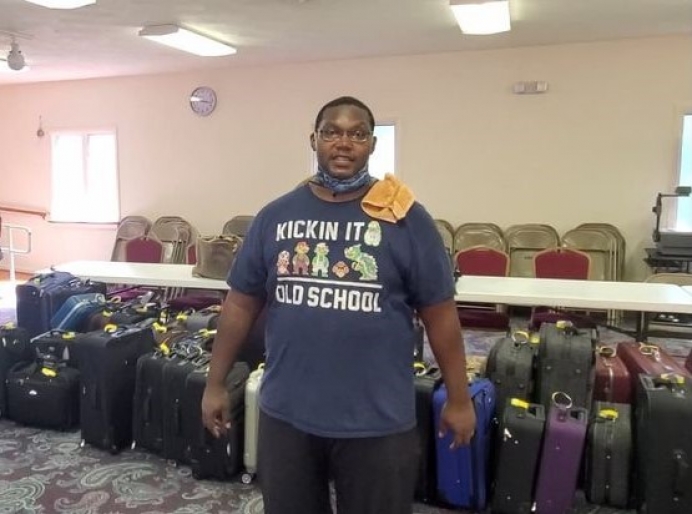 Foster children have unseen needs—love requires seeing and meeting them

Pastor Sean Burch was abandoned by his birth parents on a hotel balcony along with his two younger brothers. He was placed in an orphanage at the age of three and became a ward of the district (District of Columbia) until he was 21 years old.

This is the backdrop of Burch’s vision to help children in the foster care system.

“I remember someone gave me a suitcase,” Burch said. “One of the first things I could say that I owned was a suitcase. To walk around with a trash bag, some people say that makes me feel like I’m trash.”

Unfortunately, it is common for children in foster care to live out of a trash bag. This is why Burch, pastor for Spirit of Unity Baptist Church in Roanoke, VA, founded Suitcases with Hope  which collected suitcases on Saturdays throughout the month of September.

Burch said on a local Roanoke television news station the hope for the initiative goal was that, “It would give that child some hope.”

“For me, it gave me hope” he said of being given the suitcase, “and sometimes it doesn’t take a lot of hope, it was just that one small gesture, that meaningful gift that made a difference for me to say, ‘you know, the world is not all that bad and I’m not all that broken as other people or the statistics may suggest that I am.”

In discussing societal attitudes toward children in the foster system, Burch stated, “It is noteworthy, I had this experience where someone made a Facebook comment where they referenced foster children, and they said, ‘Who wants someone else’s broken child?’ There is a misconception that they are broken children.”

“If you approach it (foster children) that way, all people see is kids with problems,” Burch said. “They just need love and good attention instead of the bad or negative attention they receive in their young lives. Give them a chance, you’ll be surprised.”

Tweet This: "Foster kids just need love and good attention .. Give them a chance, you’ll be surprised.”

Burch is especially concerned about teenagers. He sees a great need for good foster parents or a foster mentor in their lives. Having personally traveled a long road through the foster care system, Burch’s own life has become a testimony to overcoming the challenges.

Burch attended college and holds a Master of Divinity degree. He is married with two daughters and pastors his church.

As the weekend of the last Saturday for the drive approached, Burch expressed plans for doing this annually. News of this drive has gone beyond the state of Virginia. In October Burch plans to expand Suitcases with Hope in other states.

“We have about 400 suitcases—we need just 200 to hit the goal of 600,” said Burch. “These suitcases will be donated to local foster care agencies. Two agencies so far, will receive them and we are reaching out to social services locally for additional needs.”

Initially Burch made a proposal to the diaconate leadership of his congregation. They were eager to partner with this effort, but it has become clear, support in the community will extend this new ministry well beyond a single church.

Regarding the greatest needs of foster children, Burch said, “I have an understanding that foster children need foster families. Not all listed in the system have a foster home already, so you are placed in an orphanage (today they are usually called group homes).”

“Most people may feel like they aren’t in the position to be able to foster a child. There are many other ways to help. Mentorship programs enable you to be involved in a child’s life and get to see to other needs.”

“Churches can be creative in building ministry around a variety needs such as toiletries, clothing, offering scholarships to help foster children have opportunities for college or in a trade school,” he said.

“Achievable programing, to help out foster children from a financial standpoint,” he continued. “This includes investments directly to the kids and their families, helping them gain access to the internet to open up additional career and educational opportunities.”

“I know there are foster care agencies that will receive actual monetary donations,” added Burch. “Others are restricted. If not money, then clothes, shoes, toiletries, and certainly suitcases.”

A bigger concern in the foster system—kids aging out at 18 who are not fully functioning adults.

“It is too early, and a detriment,” said Burch. “I was going to school until 21 so I was still able to stay in the system. I was so fortunate—they taught me how to balance a check book and other life skills I would not have had if released three years earlier.”

Knowing more about these needs enables individuals and ministries to create avenues to reach out to children in the foster system. Burch challenges people to get really creative in providing skill sets to foster children in their local community.

“A lot of people are unaware of the biological situations kids come from—because kids navigate through a lot of foster home situations (good and bad), the vetting requirement could be improved greatly,” Burch stated, noting it is sometimes unfortunately just another paycheck to foster parents.

“Make sure you are doing it for the right reason,” he said with great concern. “You need to match up kids with possible homes, but don’t lower standards, they need good homes. Foster homes that are abusive become a double-edged sword.”

“It takes everybody working together,” he said. “It takes a village to ensure there is safety and dignity. People just don’t know the need.”

“Somebody wanted me to succeed and they went out of their way to ensure it, so who am I to not pick up the torch and be able to help out the next foster child,” said Burch. “As one member of our church said to me, ‘Pastor Burch, you have uncovered a need that no one knew existed.’”

For more information on Suitcases With Hope, contact the church at (540) 992-2201or This email address is being protected from spambots. You need JavaScript enabled to view it..