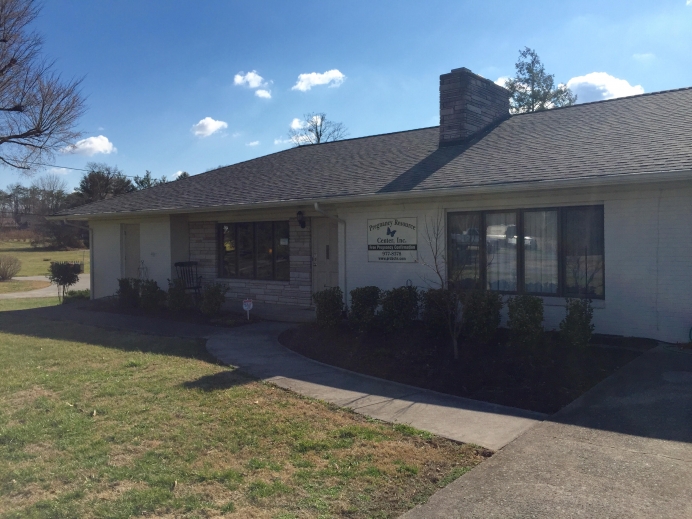 When Valerie Millsapps discovered she was pregnant at age 18, she said she felt alone and scared.

“The guy wanted me to have an abortion. I was adopted, and I knew that my mom chose life for me, so I knew it wasn’t an option,” Millsapps said. “When I got to see her face, it was all worth it. But it was hard. If there had been pregnancy center, it could have helped me through the struggles.

“You don’t have to be in this alone.”

Millsapps, the executive director of Pregnancy Resource Center of Blount County, Tenn., draws on her own experiences and a personal connection to the families they serve.

“Being a teen mom, myself, I have a heart for them, too. If we can change one person’s mind and show them hope; we’ve done our job. I didn’t have that hope when I found out I was pregnant,” Millsapps said.

Millsapps’ oldest daughter is now 16 and has a passion for missions. Her husband adopted her before they got married, and they have another daughter who is 8.

“A woman can become a strong mom; a strong family. No matter what obstacle, it’s just a bump in the road and together, we can overcome.”

The staff at the Pregnancy Resource Center basically “takes you in,” Millsapps said, even though the families they serve don’t actually stay there. The center performs free ultrasounds, pregnancy tests, adoption referrals, counseling, hosts life skill classes and helps the families obtain the items they need to raise their children. The center also has an abortion recovery program.

The Pregnancy Resource Center is celebrating its 30th anniversary of serving the community, with plans to expand its services through a Save the Stork mobile ultrasound unit.

They serve a large, rural community, Millsapps said, and this bus will allows them to provide services to those without a way to get to their center.

“A lot of our clients either have to get a ride, or don’t have a way to drive here,” she said. “This will be a way bring ultrasounds, pregnancy testing to them as well we educate them about where the center is and talk about the other programs.”

The goal would be to routinely drive the bus to specific areas to increases presence and awareness in the communities. So far, they’ve raised $16,000 of the $110,000 needed.

Millsapps has served as executive director for the last two years.

“I’m blessed just to be able to serve the community with life-affirming programs,” she said. “I’m blessed to serve God’s call.”

When she first started at the center, Millsapps said they didn’t see many abortion-minded clients, maybe one a month.

Tweet This: "A woman can become a strong mom. No matter what obstacle, we can overcome." #prolife #pregnancyhelp/span>

“My thinking was ‘maybe it’s not bad in our area,’” she said. “So I went out with a group that sidewalks counsels at the two [abortion] clinics within 20 minutes of our center.

One clinic near the heart of the university area reports performing 35 abortions a week on average, and there were 25 cars that pulled in that morning.

“They tell them we’re protestors and not to take information from us,” she said. “I really got to see the obstacles in sharing the truth with these women about other options. When I got to experience that, I got frustrated about what am I doing wrong? Why aren’t they coming to us? God really convicted me.”

She said she started doing prayer walks around the center, asking God to send these women there.

“No matter the choice they choose, we’re still here—even if they go through with the abortion,” she said. “They may not need us now, but they may in the future for support.”

They changed their outreach approach, Millsapps said, from advertising in the phonebook to more online outreach to those looking for abortion or pregnancy help.

Now, Millsapps said they see about five to 10 abortion-minded women a month.

“To me, that’s still small compared to how many women the clinics are seeing each day,” Millsapps said. “We’ve been here 30 years, we just want to go out in the community to educate and let others know we exist. I think it’s just an ongoing struggle to let people know.”

Since she started at the center, they’ve also added men’s community outreach.

“We are proud of the men who step up in an important role,” Millsapps said. “Some have never had people speak encouragement to them or tell them, ‘We’re proud of you.’ We’re excited to build them up and be there every step as they learn to be fathers.”

“I think of the bigger picture,” Millsapps said. “The ripple effect of the family we touched, that’s thousands of people and it trickles down to generations.”

Another goal for their 30th year is the hope to retire their mortgage, Millsapps said. Since she started, they’ve dropped the mortgage from about $90,000 to $50,000, with the hope that once its payed off, they have $13,000 more a year to be able to put back into outreach.

The center primarily runs on donations from individuals, businesses and churches in the community. It is not state or federally funded, but it does receive some grant money.

“We’re supported well in the community, but there’s still a lot of people who don’t know what we do or that we’re even here,” she said.