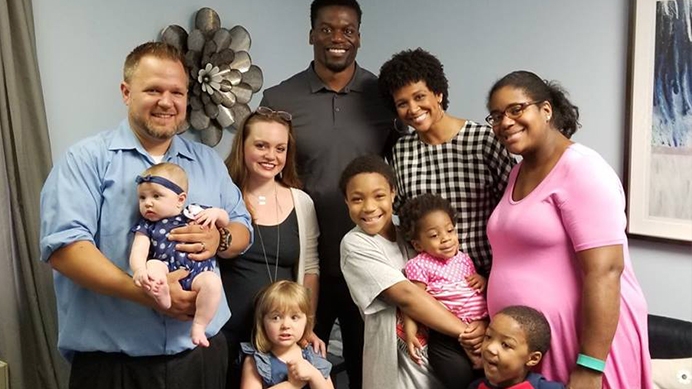 If not for then-Baltimore Ravens tight end Benjamin Watson and his wife Kirsten, Maryland’s Severna Park Pregnancy Clinic staff might today be defending life without their strongest weapon.

The clinic’s long-lived ultrasound machine lingered just one mechanical failure away from its demise.

But because of the Watsons’ generosity, a new, state-of-the-art 3D/4D ultrasound machine took pride of place in the Severna Park clinic on June 1.

To celebrate this gift—which he made through the Ethics and Religious Liberties Commission and Focus on the Family’s Option Ultrasound Program—the staff, board, and two client families granted their benefactors’ wish to tour a pregnancy clinic serving primarily women at risk for abortion from the Baltimore area.

Pregnancy Clinic Ministries’ CEO Pamela Palumbo led the tour, explaining how her three clinics, including one in Bowie and another in Annapolis, defend life against Maryland’s completely unrestricted abortion industry.

Via ultrasound, they let women see what’s happening inside their bodies early in pregnancy—vital knowledge for the 7,000 women who call them each year, most of whom start out asking, “How much are your abortions?”

That question is not at all surprising in the Severna Park clinic. That clinic occupies part of a three-story commercial building that once belonged to Gynecare Center, an abortion clinic.

“When we walked into the place, we found they had left overnight,” Palumbo said. “There were still bloody sponges on the floor, blood stains on the floor, client files they had left behind. They didn't close; they simply moved to a very discreet location where they wouldn't have people out front protesting and holding signs and praying.”

Severna Park Pregnancy Clinic opened there in 2005. Even seven years later, Palumbo discovered, the abortion clinic had never changed the address on its website, leading women to find the life-affirming clinic welcoming them in its place.

By the time the Watsons came for their tour, they found all the rooms decorated and completely repainted—with one exception. After praying over the new ultrasound machine with the clinic board and staff, the Watsons were invited through wide accordion doors into the “prayer room,” once the scene of unreported numbers of late-term abortions.

There they found walls now covered with Scripture verses handwritten by previous pro-life visitors. And on the floor lay a throw rug which Palumbo lifted to reveal the last blood stain testifying to the room’s history.

“I have been in this room a half a dozen times and it is emotional for me each time,” Pregnancy Clinic’s accountant Jim Anderson said. “I will never be comfortable standing in this room. When Mrs. Watson took off her shoes and got as low to the ground as she could to write on the wall—it was very powerful.” Mr. Watson, making the most of his height, left a message near the ceiling. 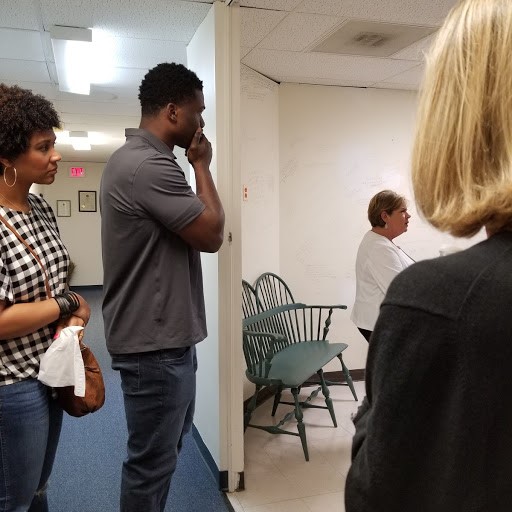 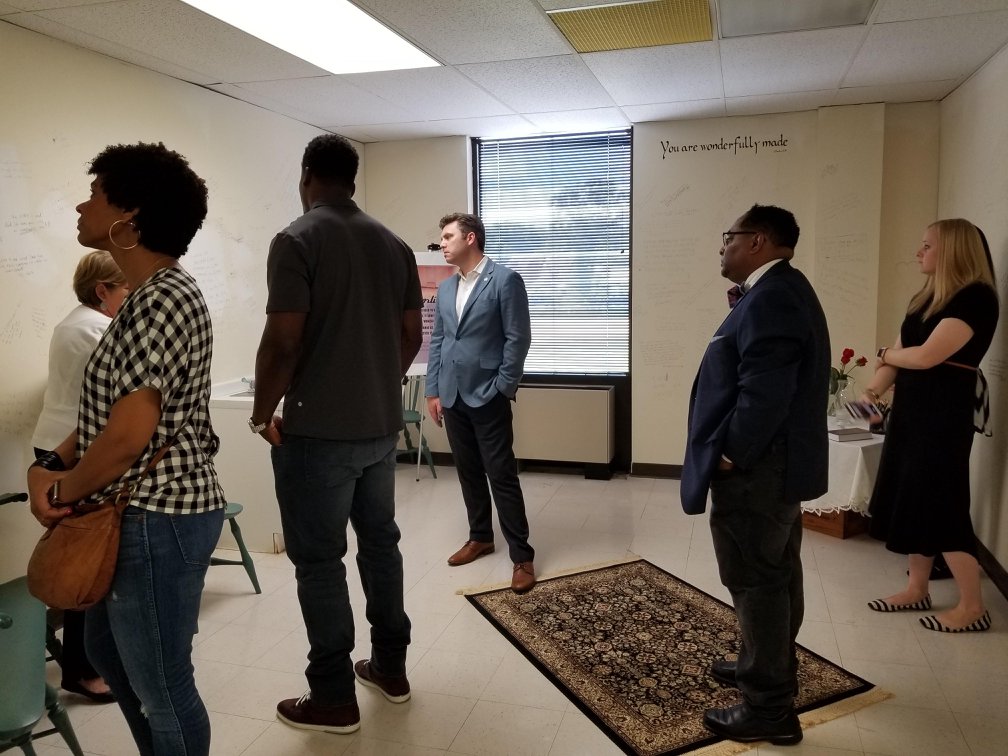 During the tour, Watson and the Pregnancy Clinic staff also discussed their shared desire to empower fathers. Watson, father of five and author of The New Dad’s Play Book, spent part of his time at the clinic talking one-on-one with a ten-year-old boy named Julius about what it means to be a Christian man.

Julius’s mother, Talana Hamilton, told Watson she chose to give birth to her son after an ultrasound at the clinic. Because of that choice, Julius was alive to receive manhood tips and an autographed football from Watson, his Ravens hero.

Another client, a dad named Dave Norman, told the Watsons an ultrasound saved his whole family. Norman and his now-wife Justine were on a self-destructive path of addiction until they saw their pre-born daughter on the screen. Both parents decided to “get clean and stay clean” for the sake of their child.

Part of the clinic’s strong connection to fathers like Dave is due to their “MVPs,” Palumbo said. MVPs, or Male Volunteer Presence, are men equipped to talk with the fathers who accompany their partners to their appointments.

“Our MVPs have been trained to give dads education on abortion, to talk to them about what's going on and about what it means to be a father—which means to step up and protect—and also what the woman could potentially be going through,” she said. “We want to give the men information to empower them in ways no one has ever encouraged them before.”

Hearing that, Watson not only signed Palumbo’s copy of his book, but also went on to mail her a case of them for the new dads.

Benjamin Watson signs the football of ten-year-old Julius, a Maryland boy whose life was saved thanks to an ultrasound at the Pregnancy Clinic. | Photo Courtesy: Pregnancy Clinic 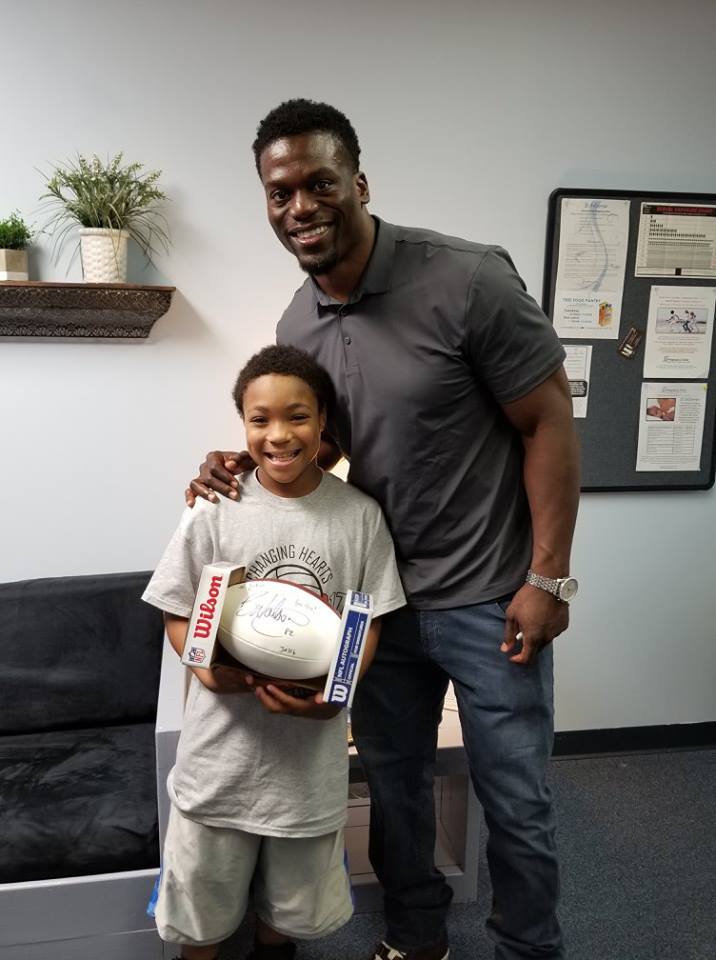 Why the Gift of Ultrasound?

In a recent Facebook post, Benjamin Watson explained what drove his donation: “Years ago, after a 3D/4D ultrasound for our first child, we envisioned the day when we would be able to give other families this gift… For me, as I yawned after seeing my daughter yawn in utero, the pregnancy became real in a much more tangible way.”

Tweet This: Thank you, @BenjaminSWatson and Kirsten, for being a voice for the unborn and their mothers! #prolife @kinglewrites

For Palumbo and her team, every day that their clinics can provide 3D/4D ultrasound means fewer women will believe the lie that “it’s not a baby.”

“This is an instant-gratification society,” she said, noting how today’s women may come to a center as soon as they miss a period. “With the transvaginal internal Doppler, even when the baby is too small to be visually clear, we can pick up the heartbeat at six weeks and three days. That's really important for this generation.”

Watson, who recently left Baltimore to play for the New Orleans Saints, highlighted the value of ultrasound on his Facebook post, saying, “Seeing life inside the womb not only affirms its beauty and dignity but encourages the mother and father that their child is worth fighting for.”

But the battle for the lives of babies and their parents is far from over. 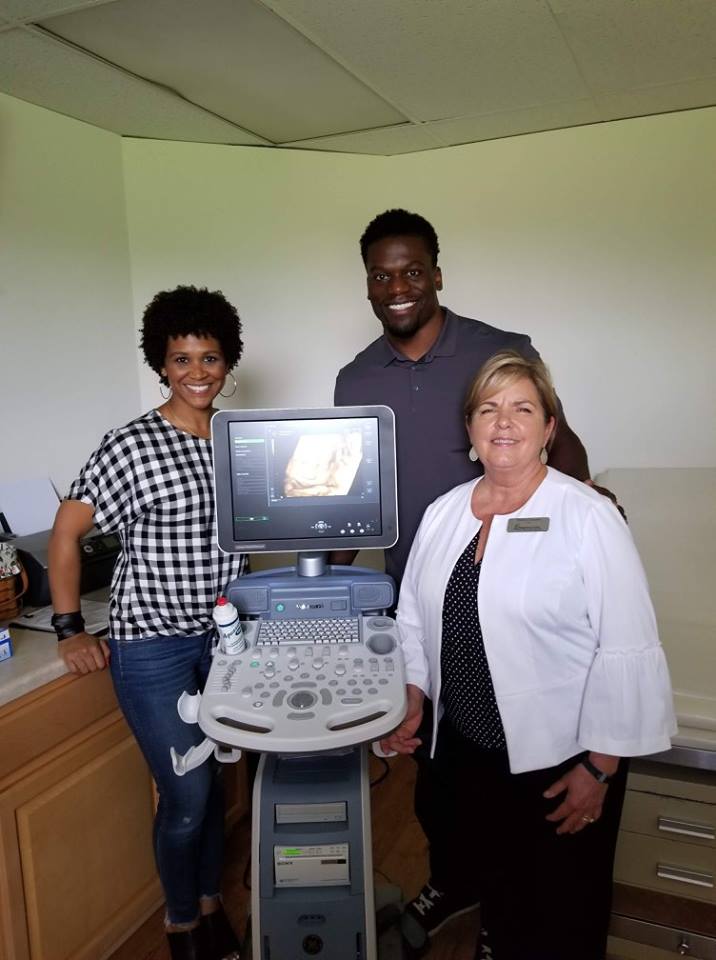