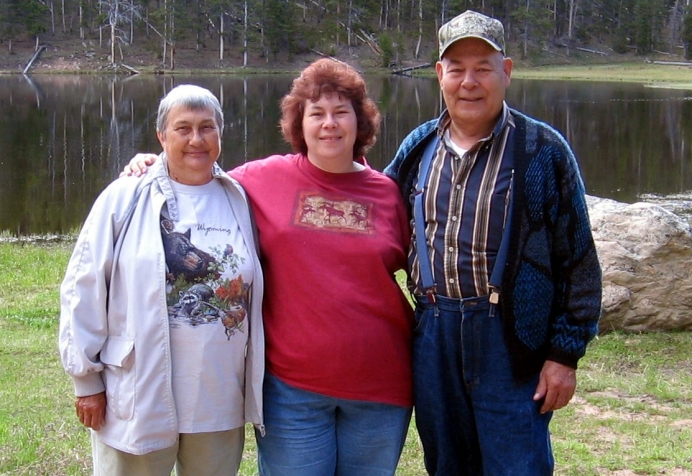 Five lessons from an imperfect father

Recently, I spent time with my parents who live in another state, celebrating their 60th wedding anniversary.

I am a rarity – a person whose parents have stayed together for six decades.

Statistics show about 45 percent of U.S. marriages end in divorce, and that one in four children are raised in single-parent homes.

I am also blessed to still have both parents living – they are in their eighties, and with COVID-19 continuing across our nation, threatening people’s lives, especially the elderly with health issues, I count myself fortunate to have both parents on this earth right now.

As I enjoyed time with them and we shared laughter and memories, I reflected on their 60 years together, on the upcoming Father’s Day, and upon my dad’s forthcoming birthday.

With only an eighth-grade education, my dad didn’t have a lot of options regarding employment. He worked in factories in Iowa, the state where I was raised. Yet, he pursued better jobs to raise his small family (I’m an only child).

He persevered in jobs he didn’t necessarily like, and he worked hard. His endeavors helped him move up, especially with the last two companies for which he worked, becoming a supervisor and earning more money.

He persevered and was able to achieve respectable positions despite his lack of schooling. Because of perseverance, despite lack of financial help from my parents, I became the first college graduate on either side of my family.

I distinctly remember the pride my dad showed and the warm, encouraging smile from my mother as I crossed that stage to receive my bachelor’s degree. Perseverance is a critical key to life, according to the Apostle Paul.

Living with imperfect people requires a lot of forgiveness.

Sadly, both dad and I can hold grudges; my mother is the more forgiving, grace-filled one. However, Dad has sought forgiveness for past wrongs, especially recently, and I’ve accepted his apologies more as he’s gotten older, recognizing none of us know how much time we have on this earth.

Forgiveness doesn’t come easily; hurts can, and do, run deep. God commands us to forgive, both those we love and those who are our enemies, and with His help, we can do so.

My parents did an amazing thing nearly 40 years ago – they bought property in western Montana with no electricity and no running water. They retired early and became what I term ‘modern pioneers.’

Prior to all of that, when he was 18 years old, my dad moved from his home-state of Louisiana to Iowa, knowing only one family. He made his life there for more than 20 years, and then he and I and mom relocated to the western states, barely knowing anyone.

As an adult, I’ve moved several times, too, often to places where I either didn’t know anyone or had just a friend or two in the area.

Those times remind me of Abraham who followed where God led. Life takes courage, whether that’s a move, a new job, college, marriage, house-buying, or other ventures.

Perhaps an uncertain health diagnosis, financial stress, or marriage issues. My parents have endured all three, but they’ve held onto their faith, believing God would provide for and help them through the situation.

Oftentimes, faith is the only thing we have, and we hold tightly to it, praying fervently and trusting God to guide us through the darkness with His loving light.

I’ve faced crises many times, including both parents hospitalized at the same time and financial setbacks and uncertainties.

Prayer and faith in God have helped me though, and I continue to trust in Him for guidance and protection. Jesus constantly prayed, and He taught His disciples to pray and to have faith.

My parents grew up with minimal material things. Both came from farming families, one in the deep South, the other in the Midwest. With dad’s lack of education, he worked minimum-wage jobs. My mother stayed home.

Therefore, our financial situation, though not dire, was not one of the upper class.

However, we always had a roof over our heads, food on our table, and opportunities to take short, and sometimes long-distance, trips.

Coveting what others have is highly discouraged in God’s word, and though at times both dad and I envied our friends’ wealth, we put ourselves back on track, being mindful of the blessings God gives.

I’m like my dad in many ways, sometimes to my chagrin.

However, one way we are alike for which I’m grateful is our appreciation of God’s creation. My dad remains a major outdoorsman – fishing, hunting, camping, and taking pictures of nature. He also sets out bird feeders and has built shelters, including bird boxes and brush piles for rabbits and other small animals.

He passed the enjoyment of the outdoors to me, although I’m more of a photographer than a hunter or fisherperson. I bask in the beauty of sunrises and sunsets, of hearing elk bugle in September or birds twitter from trees, of seeing eagles soar, and experiencing the snuggles of my dogs and cats.

My father turns 84 in July; he’s been part of my life for nearly 60 of those years. Lessons learned from life with an imperfect father allow me to deeply seek and know my perfect Heavenly Father, and I look forward to eternal life with Him.

Every good and perfect gift is from above, coming down from the Father of the heavenly lights, who does not change like shifting shadows. – James 1:17

Gayle M. Irwin is an award-winning author and freelance writer living in Wyoming. She’s been recognized by Wyoming Writers, Inc. and the Wyoming Press Association for several of her works. She’s contributed short stories to seven Chicken Soup for the Soul books as well. For nearly 13 years, Gayle worked as Patient Resources Director at True Care Women’s Resource Center, a pro-life pregnancy medical resource center in Casper, Wyoming. She will retire in December 2022 to focus on her writing career. Gayle is the author of many inspirational pet books for children and adults, including devotions such as Walking in Trust: Lessons Learned With My Blind Dog and the upcoming Seasons of Life Seasons of Nature. She considers herself a human and pet life advocate and finds creativity and connection in God’s creation. Learn more about Gayle on her website: gaylemirwin.com