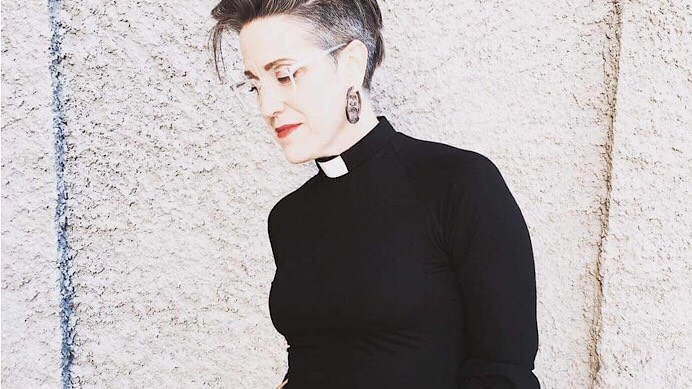 Feminist Pastor to Melt Purity Rings in Rejection of Church Teaching...But What Is Her Real Impact?

Bolz-Weber is an icon for the feminist left. She’s now making the rounds on TV and radio, especially after asking young people to reject their purity rings in exchange for her promise to send them a “Certificate of Impurity” so the recipient can live a “shameless, open and free life...” Let’s not get into what she plans to do with the rings. Check the link if you want to know. It’s not good.

What’s fascinating is that Bolz-Weber is known as a “religious leader.” She is the founder of Denver’s House for All Sinners and Saints Church, a member of the Evangelical Lutheran Church in America. Interesting, to say the least.

If you’re reading this column and expecting me to “destroy” Ms. Bolz-Weber for what she does in the name of faith, it’s not going to happen.

Do I agree with her? No. But I’ve seen many distortions of Christianity and realize I’m probably not the best person to take on the role of Heresy Detector. After all, I’ve only got 800 or so followers on Twitter and just 400 on Instagram. Who would notice?

My fifteen minutes of research into Ms. Bolz-Weber, however, taught me a valuable lesson: Check out the fruit.

With all the media buzz surrounding her (she has a New York Times best-seller, too!) and the fact that her “Shameless” purity certificate is getting free publicity everywhere from The Huffington Post to conservative sites, this supposedly famous religious icon can’t get an audience in the church she founded.

According to the church’s website, it meets in the building of another “progressive” church on Sundays at 5 PM, with only 100 to 200 in attendance in the middle of downtown Denver, with likely thousands upon thousands living within one mile.

Don’t get me wrong. A church with 100 to 200 in attendance is not to be laughed at. Most churches are in this size range. But, Home for All Saints and Sinners Church was founded by someone lauded by many on the left as one of today’s great theologians. It stands to reason that many out-of-towners would take the opportunity to visit HFASS, which the church touts on its website.

Still, with visitors and regular attendees, we’re talking 100-200 people, if the church isn’t fudging its numbers.

It’s true that Bolz-Weber is no longer the senior pastor. She is part-time at best as she travels the country. Yet the church she founded with eight others (so it says on the site) in 2008 is not connecting with the community in what anyone would call a “progressive” city. Her grand experiment in reforming the church is failing.

Evidently, people are reading her books. And I’m sure she has some great quotes for radio and TV. But when it comes to real-life people wanting to live the life of faith she touts—there’s no fruit.

Tweet This: "When it comes to real-life people wanting to live the life of faith she touts—there’s no fruit." - @KirkWalden

Just 1.2 miles from my home is what began as a neighborhood church well outside of Nashville. We’ve got some growing neighborhoods, but the biggest traffic hazard on our roads are deer caught in headlights at night.

This church’s pastor has written a few books, none as popular as Nadia Bolz-Weber’s missives. But on Sunday morning, anyone driving by the church will likely negotiate three traffic policemen, shuttle buses and thousands heading inside for one of its three services. While my family is not connected with this church, we’ve visited on several occasions and each time it is packed.

And when the pastor asks those attending to consider a “next step” of faith, there are always a lot of takers.

When I first read about Nadia Bolz-Weber’s “project,” I was angry. How could someone do something this outrageous? Furthering my anger, the media lapped it up.

On the other side of this divide are many of us in the pregnancy help community, reaching young people and offering clarity in a mixed-up, conflicted world. Our books rarely make the best-seller lists. CNN, The New York Times, and The Huffington Post have no interest in our message, except to mock the idea of waiting until marriage.

Those who stay the course and wait for marriage (or make a new decision to wait) will be laughed at by the elite among us. According to Ms. Bolz-Weber and others, they will have no freedom, no openness in their lives.

But those who wait also won’t have unplanned pregnancies outside of marriage, where relationships are pushed to the brink. And they won’t have abortion/life decisions to make, or constant worries about whether a partner carries an infection which could be life-threatening. I’ll take this over any definition of “freedom” one might find from a progressive theologian.

No, we may not be touted by the media as a breath of fresh air in a stuffy, archaic culture. That’s okay.

For us, it’s enough to know that many teenagers—as a result of decisions made through our outreach—will go to sleep tonight at peace, knowing the decisions they make today will pay off tomorrow.

Others can have the tens of thousands of social media followers. We’ll take the fruit, thank you very much.