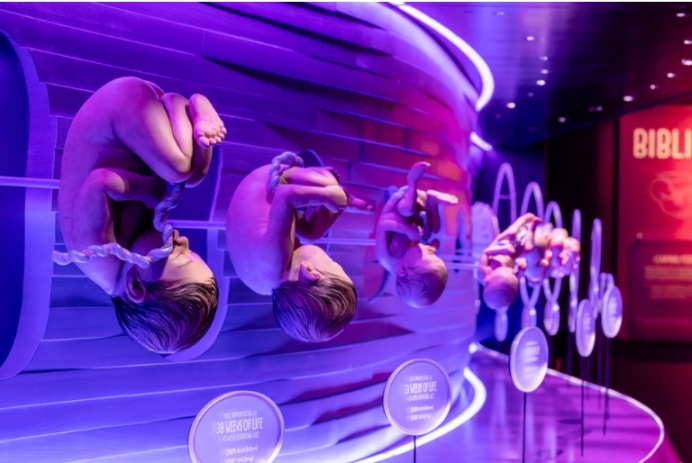 Fearfully and Wonderfully Made: Exhibit shows up-close look at the miracle of life

The new exhibit at the Creation Museum entitled, "Fearfully and Wonderfully Made," shows an up-close and personal view of the miracle of life in the womb. The exhibit covers a baby’s life cycle from fertilization of the egg through birth. The goal is to solidify the sanctity of life by showing the miracle of life beginning at the moment the egg is fertilized.

The "Fearfully and Wonderfully Made" exhibit opened last September and is designed to counter the cultural rhetoric that abortion is justifiable because babies are not human beings. This exhibit proves otherwise by answering the question, “When does human life begin?”

The Creation Museum is located in Petersburg, Kentucky. It’s a 75,000 square-foot facility that tells the history of the Earth from the biblical worldview. The only museum of its kind thus far, it has been widely criticized for its supposed misrepresentation of science.

As someone who has visited this museum multiple times, I can attest that it shows that science and Creationism are compatible in an educated, well-researched and kind way. For those who are exhausted from being told they are ignorant for believing in the biblical worldview of Creation, the museum is a breath of fresh air; every visit there renews my strength and encourages me in the faith.

Ken Ham is CEO and founder of Answers in Genesis (AiG), which owns and operates the Creation Museum and the Ark Encounter in nearby Williamstown, KY. Ham is a popular Christian speaker who many know for the notorious 2014 Creationism vs. evolution debate with Bill Nye, which garnered three million viewers for the live event and millions more views since.

The incredible exhibits at the Creation Museum, such as Creation and Science and Bible History, stem from the emphasis and importance of the book of Genesis to the Christian. Without the foundational biblical authority of Genesis, the world’s view and the church’s view on the authenticity of Genesis is called into question. By default, the sanctity of human life and the hot button debate of murdering babies has now risen into question. All of these things are covered and explained in an incredibly interactive way in the new “Fearfully and Wonderfully Made” exhibit.

By enabling the public to observe the miracle of life growing in the womb, the exhibit shows premeditated, intelligent design, that we are each individually handcrafted purposefully by a loving God. The exhibit’s title is pulled from the Bible verse found in the book of Psalms chapter 139 verses 13-14: “I praise you, for I am fearfully and wonderfully made. Wonderful are your works; my soul knows it very well.”

Through this exhibit Ham counters the backward thinking that abortion is not murder, that we are the same as animals and babies are merely blobs of soulless tissue.

“The Bible informs us that every human being, both male and female and from the moment of fertilization, is made in God’s image,” the exhibit information declares. “This is true regardless of one’s level of development, physical or mental ability, ethnicity, or age. Although issues regarding life in the womb are hotly contested in our world, the matter is settled by the ultimate authority, the very words of our Creator.”

By displaying the incredible spiritual and biblical beauty of the growing human life in the womb of a mother, we can get an up close and personal view of the creativity and intentionality of an all-powerful Creator, from the very moment of conception. It shows onlookers how we are not merely accidents or coincidences. Rather, we are here for a very specific purpose on purpose, of immeasurable value.

Tweet This: W/the incredible spiritual & biblical beauty of the growing human life in the womb we see the creativity & intentionality of our Creator

Similarly, with the intent of pre-meditated creation from a loving Creator, hope and healing are also presented for all, including those who have had abortions, gently guiding people to hope and forgiveness amidst the wreckage and aftermath abortion leaves in its wake.

Along with the models of fertilization through birth, some even translucent to show the growth of vital organs as the baby matures, there’s also 4D ultrasound video footage of babies in the womb.

In an effort to humanize lives in a culture where they’ve been brutally dehumanized, the "Fearfully and Wonderfully Made" exhibit stands to reach numerous people in hopes to aid in the restoration of the sanctity of human life for all by showing the miracle of life stemming from a loving Creator.