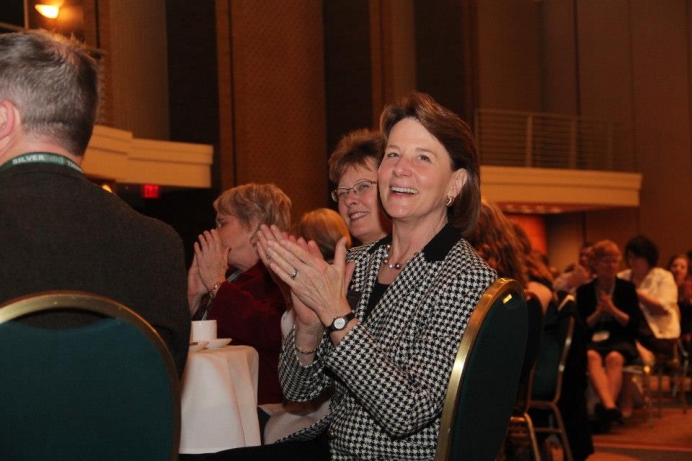 'Defender of Life' Hartshorn Honored by Students for Life

Imagine answering the call to serve women and families in a pregnancy help setting 40-plus years ago. No how-to manuals. No tried and true practices. Nothing.

Today, we have statistics at our fingertips. Knowledge is just a Google search away. Social media connects us with people around the world in seconds. New resources and organizations committed to defending and commending life are literally an email away.

One of those leaders, Heartbeat International President Peggy Hartshorn, Ph.D., is herself a major reason such resources exist. Hartshorn was honored by Students for Life of America as a “Defender of Life” at the SFLA West Conference Jan. 25 in San Francisco.

“It is truly an honor to be recognized by an excellent pro-life organization like Students for Life," Hartshorn said. "The work they are doing among high school and college students around the country is remarkable, and I am so thankful to commend with them the great work that pregnancy help organizations are doing every day in every region of the world."

Hartshorn, whose awareness of the wider issue of abortion was sparked while she was an undergraduate in San Francisco in 1968, became involved in the pro-life movement with a local Central Ohio chapter of Right to Life shortly after learning of the U.S. Supreme Court’s Roe v. Wade decision that made abortion on-demand the law of the land Jan. 22, 1973.

She and her husband, Mike, began housing pregnant women in 1974 and started Pregnancy Decision Health Centers—now a six-location organization—in 1981. She became Heartbeat International’s first full-time president in 1993, when the organization had approximately 100 centers.

“[Peggy] is an outstanding individual in the pro-life movement and she has so much wisdom to pass onto the new generation of pro-life leaders,” SFLA President Kristan Hawkins said.

Hartshorn has written and published manuals to train pregnancy help organizations at the board, leadership, staffing, volunteer, donor and organizational vision levels. Hartshorn’s The LOVE Approach Training Manual, first published by Heartbeat International in 1994, is now in its third edition and has sold over 17,000 copies.

Her 2011 book, Foot Soldiers Armed with Love: Heartbeat International’s First Forty Years, captures the story of how the pregnancy help community came to be.

As a recipient of the Defender of Life Award, Hartshorn joins a powerful list of pro-life advocates such as Congressman Chris Smith (R-NJ), Jim Bob Duggar, Fr. Frank Pavone, Abby Johnson, and David Bereit (40 Days for Life) who have done much to inspire the next generation of leaders.

Recognized over the years for her pro-life work, Hartshorn's many awards also include the Cardinal John J. O'Connor pro-life award from Legatus International, the Sanctity of Human Life Award, the Catholic Woman of the Year Award from the Diocese of Columbus (Ohio), and the President's Volunteer Service Award under President George W. Bush.

“SFLA was so proud to present her with the award this year,” Hawkins said. “I believe her background and experience in the pro-life movement really resonated with our students and energized them to find their own calling in helping to abolish abortion in their lifetime.”