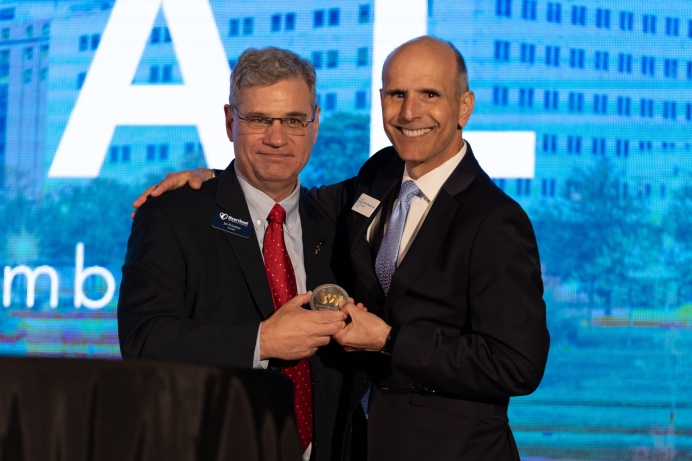 One of the pioneers of the life-saving abortion pill reversal protocol was honored for his impact on the pro-life movement during Heartbeat International’s Annual Pregnancy Help Conference this week.

“I would like to honor a very special person for the movement, and for not just the pregnancy help movement, but for the pro-life movement,” he said, “and that is Dr. George Delgado.”

The network and its 24/7 hotline, now known as the Abortion Pill Rescue® Network, changed hands from Delgado to Heartbeat International in 2018. Delgado and Harrison continue to serve as medical advisors to the APRN.

Abortion pill reversal (APR) utilizes a treatment administering progesterone, the natural hormone in a pregnant mom’s system that sustains pregnancy. The treatment used for decades to prevent miscarriage is applied through APR to counter the first drug in the two-drug chemical abortion process, mifepristone.

The protocol is the target of pro-abortion activists, who try to demean the treatment’s validity via the media and attempt to block laws mandating that women be informed of the protocol’s availability through the courts.

These efforts include disparaging it as “junk science.”

Nonetheless, statistics show that to date 2,000 lives and counting have been saved thanks to the APRN.

Godsey told the hundreds of pregnancy help servants at Heartbeat’s Conference that Delgado was a tireless proponent of the life-saving protocol, despite pro-abortion pushback.

“And he, out of an activist heart, the compassion, the true medical care and concern for those he was serving, he basically willed it into existence,” Godsey said of Delgado’s forming of the APRN.

“He saw the need and pursued it passionately,” Godsey said, “he’s been all over not just the country, but the world championing abortion pill reversal.”

Godsey then spoke of the pro-abortion heat directed Delgado’s way.

Godsey then characterized the evil that APR counters through its life-saving effects.

“We talk about … the scripture says the gates of hell will not prevail against it,” he stated, “and that’s exactly what abortion pill reversal has risen up to. And we are grateful for the legacy that Dr. George Delgado has created.”