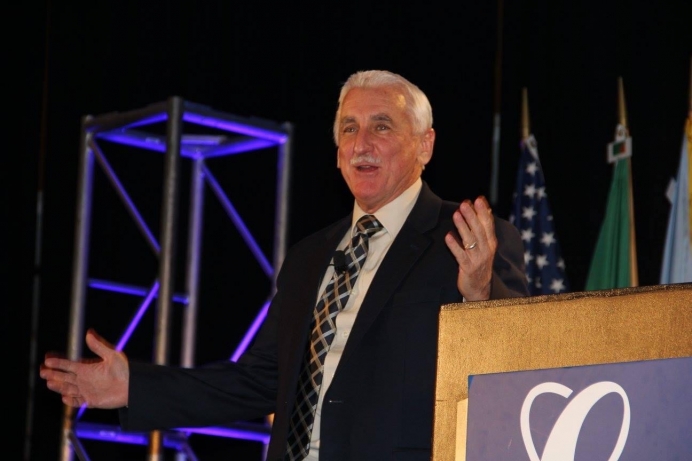 After Merritt died in the fall of 2020 it was decided immediately within Heartbeat to establish an Andy Merritt Scholarship.

“He always had a smile on his face and always talking about Jesus,” said Heartbeat International President Jor-El Godsey.

In 1981, he helped start the first pregnancy resource center connected to a church. Through his continued efforts, training and encouragement, more than 500 pregnancy resource centers came into existence. Merritt was also pastor for Edgewood Baptist Church. In addition to the center, Edgewood established the New Beginnings Adoption Agency in 1984. Merritt's work on behalf of life and his championing adoption resulted in countless lives saved and transformed.

“We also knew he had a heart for adoption,” Godsey said, explaining that the scholarship in Merritt's name is intended for someone with great passion in adoption ministry to attend the Heartbeat Conference.

This year’s Pastor Any Merritt Scholarship recipient was Brenda Newport, who has more than 35 years’ service with the Women’s Care Center in Western Pennsylvania.

Newport started as a volunteer and became executive director 1986 and is known as a visionary in pregnancy help.

In 1992 Newport was encouraged by a family court judge to start a licensed adoption agency, and Adoption By Choice began operating in January of 1993.

LAPCO meets annually for a day of prayer, and Merritt was a member and spiritual leader for the group. LAPCO is establishing the website PastorAndyMerrit.com as a memorial with several of Merritt's videos and teachings.

Upon announcing the scholarship award to Newport and presentation of Heartbeat’s Legacy Award to Merritt, Heartbeat Conference attendees viewed a video message given by Merritt in which he told the story of saving a baby from abortion only for the child to fall ill and pass way. The baby died following a few short days of constant vigil, passing on Merritt’s chest as he held her through the night.

“He was an awesome man of God,” Godsey said of Merritt. “And it’s time to move on because he would say, ‘Come on, get going.’”

Tweet This: “With great legacy like that, we know the power of God as it operates in our lives and through our lives.”